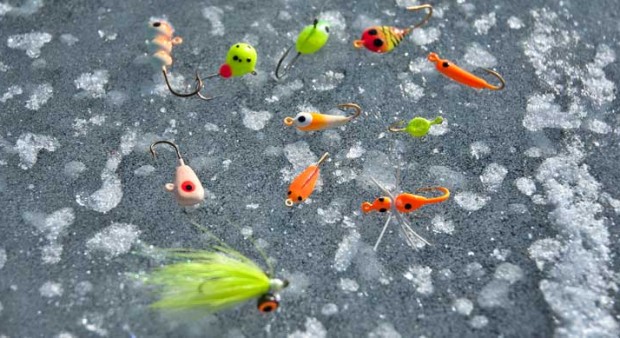 There’s a large assortment of tiny jigs that will entice winter panfish.

F. Schumacher coined the phrase “small is beautiful” in reference to economics, but the saying also lends itself well to ultra-finesse tactics for panfish. Today, there is an array of Lilliputian lures packed full of fish-catching goodness. From tiny tungsten jigs to micro plastics, these itty-bitty baits deliver high fish-catching value.

Micro munchies
In many lakes during winter, sunfish and crappie feed heavily on zooplankton. The dusk-timed activity of these micro-organisms commonly stimulates fish feeding and great fishing action. On certain lakes I frequent, these creatures are so prolific that swarms cause flickers on the flasher and interfere with underwater camera visibility. I’m not one to wax lyrical about daphnia or other species of zooplankton, but it’s important to appreciate that panfish regularly dine on munchies less than a few millimetres in size. Putting fish on the ice frequently requires wading into the realm of micro baits.

Suitable substitutes
“Matching the hatch” when it comes to zooplankton is more art than science in many respects. Lures that are exact carbon copies don’t exist like they do for minnows or juvenile yellow perch, for example, at least not yet. Perhaps nano-baits will be the next lure craze — the natural evolution of downsizing tactics. The workaround is using the smallest ice jigs and baits available. These serve as a suitable substitute to pique the interest of panfish that are tuned-in to miniature morsels. Yes, the dimensions differ, especially once bait is added, but when presented properly you can beguile pannies into biting. 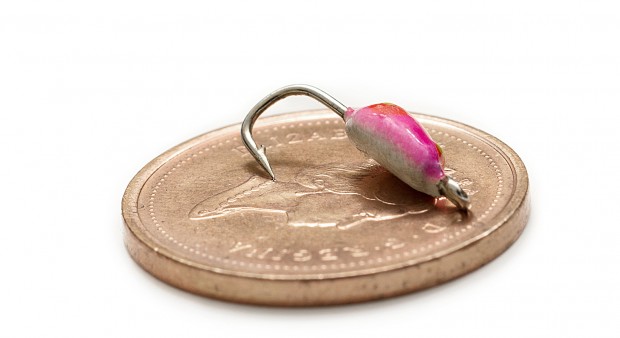 How small is small? We’re talking dainty horizontal jigs, teardrops, and ice flies in No. 8 to 16 size categories. Think featherweight, too. Consider half an ounce a starting point with 1⁄64-, 1⁄80- and 1⁄100-ounces other weight classes. Using extra-light jigs makes for subtle drops that help mimic the manoeuvres of panfish peewee cuisine. Occasionally you can sneak by with a 1⁄32-ounce jig, but don’t bank on it when up against pernickety pannies.

The infusion of tungsten into ice jigs has also resulted in a new generation of teeny offerings. It seems most big hitters in the industry are making at least one ice jig using this heavy metal these days. This is a good thing because a tungsten jig will be 40 to 50% smaller than a lead jig of an equivalent weight. Small is definitely beautiful when using teeny tungsten jigs to imitate zooplankton hors d’oeuvres.

Skinny bodies
Tipping jigs with live or soft-bait bolsters their appeal. Ice flies can be fished naked, but a piece of meat can help at times. Skin hooking one or two maggots boosts action and flavours a jig, helping trigger strikes from panfish. Micro soft baits and plastics are also deadly. These squishy add-ons bring olfactory appeal along with filament-flicking-like action. There are plenty of mites, noodles, tails, and teasers measuring less than an inch made by companies like Little Atom, Maki Plastics, Northland Fishing Tackle, and Berkley.

Gossamer thread and combos to match
Fishing micro-baits isn’t for the faint of heart. To prevent break-offs, use a small reel with a quality drag to relieve tension and protect the line from hard hits and jarring runs. Two-pound-test fluorocarbon is my primary line choice. An ultra-light rod with a forgiving tip is also recommended.

A spring bobber is another must-have. These devices signal faint up-swimming hits that are common from panfish feasting on invertebrates. Another benefit of a bobber is that it imparts a fluid swimming motion to a jig that is more in line with the locomotive practices of pint-sized prey. Rod snaps of a few inches attract fish, but to prompt pannies to pounce, try subtle moves or holding a jig still.

Less is best for a hook-set. I usually just raise the rod and start reeling. This is not the time for an aggressive wrist snap as it could tear out the tiny hook or bend it open so it loses its hold. Take your time too, when playing a fish to the hole.

Minuscule baits are the best thing in an ice fishing toolkit for matching the itty-bitty creatures panfish dine on. They’re not a perfect match, but they’re often close enough to trigger a bite, and there’s nothing small about that.

First published in the November-December issue of Ontario OUT OF DOORS magazine. Subscribe.