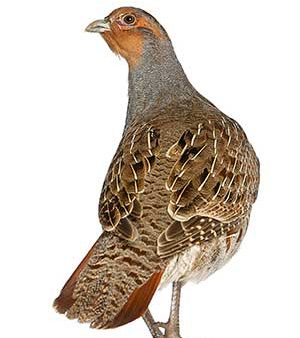 Talk to any upland gunner about bird hunting in Ontario and they’ll probably tell you about ruffed grouse, woodcock, and perhaps released pheasant. Further north, they might add spruce and sharp-tailed grouse into the mix, maybe even ptarmigan. But, these days, it’s a rare hunter who mentions Hungarian partridge.

Hunting opportunities for Huns, or as they are now called, gray partridge, are uncommon for most of us. Those who know their whereabouts are tight-lipped — and for good reason. Hun populations have been on a slow, steady downward slide since their heyday in the 1960s.

A welcome immigrant
As they did with pheasants, sportsmen brought these game birds to North America in the late 1800s.

Southwestern Ontario, with its hedgerows, small pastures, grain crops, and late haying proved ideal. And the Department of Lands and Forests (the precursor to the MNR) took notice.

Later, Huns were raised at the Codrington and Normandale hatcheries, too.

The Ontario Breeding Bird Atlas says almost 4,000 birds were distributed between 1927 and 1937 from those game farms “to almost every county and territorial district in the province.”

It also notes that most of those plantings failed.

Since 1938, the importation of other strains of Huns has been forbidden. From then on, new Ontario plantings were made with live-trapped birds taken from eastern Ontario.

By 1962, Hun populations were established in 25 counties, as well as Timiskaming District, and the Thunder Bay area. In those days, the best range in Prescott, Stormont, and Dundas Counties supported one bird per 10 acres. They were thriving.

Changing times, changing prospects
A lot has changed since then. Their decline started in the early 1960s as small farms gave way to larger operations. The hedgerows and drainage ditches that provided cover disappeared, as farmers tried to utilize every acre. Alfalfa and other crops replaced small grains. More efficient farming practices minimized waste crops that Huns utilized.

Worse still, haying season has moved ahead since the 1960s. Fifty years ago, haying typically began at the end of June, which allowed the majority of Huns time to finish nesting. Today, farmers often take the first cut off in mid-June, catching many of these birds on the nest.

Weather has also played a large part in their decline. The famous 1998 ice storm in eastern Ontario, which coated the ground with up to 11 centimetres of ice, hurt Hun populations there in a big way. Aside from the obvious problems that come with prolonged exposure to frigid weather, ice prevents ground-feeding birds, like Huns, from getting at food. Hard rains in June and July can also wipe out young broods.

All these factors have conspired to leave us with remnant populations in southwestern and eastern Ontario. The provincial stronghold is near Brantford; there’s also a small population in the Dunneville-Halimand area, where changing farming practices, which include growing shell corn and soybeans instead of tobacco, have attracted birds to the area.

The other population is in the Ottawa Valley. Hubert says Huns seem to be gravitating toward the Ottawa River valley because of better habitat.

The Timiskiming and Thunder Bay coveys haven’t been reported in some time.

Hunting pressure is not an issue, says Hubert. He says it’s too light to have an effect on their numbers, despite generous bag limits of 8 birds daily and 16 in possession. That’s partly because Huns are hard to find and also due to the fact that most remnant populations are on private property and landowners are, as a rule, protective of these birds.

Still, the Ontario Federation of Anglers and Hunters would like to see limits reduced and hunting regulations amended to reflect the current situation. They’d also support an education and recovery program.

Where do we go?
Currently, the MNR doesn’t have population estimates on gray partridges or any small game but wild turkey, says Hubert. The only MNR study ever done on the Hun was in 1950, according to Renewing Nature’s Wealth. A Kemptville-area biologist studied their ecology and completed a census, banding, tagging, range evaluation, and an interpretation of harvest information. This was used to help with the trap-and-transfer program of the day.

Today, the MNR operates under the assumption that this bird, like all small game in Ontario, is selfmanaging. It’s assumed that if a specific small-game population becomes more prominent, hunter and predator numbers will key in on them. Conversely, if those numbers go down, both will look for more abundant prey, allowing the population in question to recover.

Also, the MNR emphasis these days is on native species, which Huns are not. That raises a question. How long does it take for an animal to be considered part of our landscape? Huns have been in the province for more than 100 years. The survivors have more generations of Canadian ancestry behind them than many of us.

Hubert, however, says their decline here would be hard to reverse.

“I think they will be present here for some time,” he said “There will probably always be some on the landscape — but the landscape is changing …”

He says it’s unrealistic to think we can change farming practices or many of the conditions that led to the decline of this great game bird.

Perhaps the gray partridge along with the ring-necked pheasant provides a valuable lesson. That being, if we’re going to bring species into the province, they need to be managed, not just for a few decades, but with a truly long-term vision. To drop them by the wayside because of a change in governmental focus seems short-sighted and throws away decades of hard work.

These wonderful game birds have adapted and done their part. Perhaps it’s time for us to do ours.