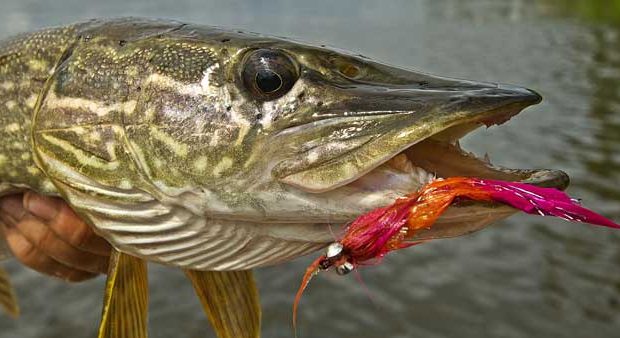 Pike have earned the reputation of being savage eaters. They attack frogs, crayfish, mice, muskrats, ducklings, and even the odd boat bumper, but 90% of their diet consists of fish. So, use patterns that imitate fish.

The patterns
One of my go-to flies for pike is an oversized Bunny Leech. The seductive motion of rabbit fur in the water is often just what is required to entice pike into hitting. But while strip leech patterns catch pike, they’re not particularly fun to cast because the rabbit fur holds so much water it’s a bit like casting an anchor.

The Dahlberg Diver is a great alternative. The deer-hair collar causes it to dive and gurgle during the retrieve, yet it doesn’t hold water like rabbit fur, so it’s easier to cast. Though it’s not commonly considered a fish pattern, if you work this elongated profile with the awkward movements of an injured fish, pike won’t refuse. Altogether, the action is frequently just the ticket to get a pike to strike.
Classic deer-hair streamer patterns, such as Lefty’s Deceiver, will always be welcome on my line, but they’re increasingly being replaced or reproduced with lighter, easier to tie, and flashier synthetic materials.

Dress for success
When it comes to which colour of fly to use, there are at least a couple of options to consider. You can use the prey-fish approach, which incorporates the predominant colours of pike forage. Grey, black, olive, white, and silver are great choices for baitfish, and remember that a dark back, light body works best. Use a black, yellow, orange, brown, or green top for panfish offerings.

Another approach is to use colours that show up when pike are challenged by poor water clarity. Orange, red, chartreuse, and yellow work well. They’ll help pike locate your fly and enable you to keep track of the fly’s location. Bright colours also stimulate a strike response, even in clear water.
Be sure to put eyes on your pike flies. Fish eyes, including on baitfish, are one of the first things you gravitate to — predators too. And that’s usually where they will strike.

How big is too big?
The debate continues to rage as to how big your pike flies need to be. Is the sky the limit? Maybe. The issue may be your ability to cast huge flies. The best approach is likely one that balances the size of the fly with the ease with which it can be cast. Having a good range of sizes in your box is a good idea. Anything from 3 to 12-plus inches will work, with the most common falling somewhere around 4 to 8 inches. You’re going to need a rod that’s strong enough — at least an 8 weight. If you don’t mind casting it, a shorter 8 to 8.5 foot, 9 or 10 weight is a good pike set-up, coupled with a pike-specific line, which most line manufacturers produce. Some anglers prefer a large-arbor fly reel to quickly pick up line. Others are happy to play the quick, short-running pike by stripping line in hand.

Pike not only take flies well, they will usually take them near the surface, so a floating line will work in most instances. When you do want to fish a little deeper, having a sink-tip line that you can quickly switch to will stand you in good stead. You’ll also need to use a wire-shock tippet. There are lots of options on the market made specifically for fly anglers, but the easiest ones are simple wire leaders used for casting spoons and plugs.

Remember, vary your retrieve, but keep that fly moving. Pike are famous for following a fly and only striking when they perceive the fly is about to escape. When a pike does hit, keep stripping so that your hook set is a combination of a strip and rod set.

Chasing these monsters with a fly rod is a great way to spend the open-water months of the year.