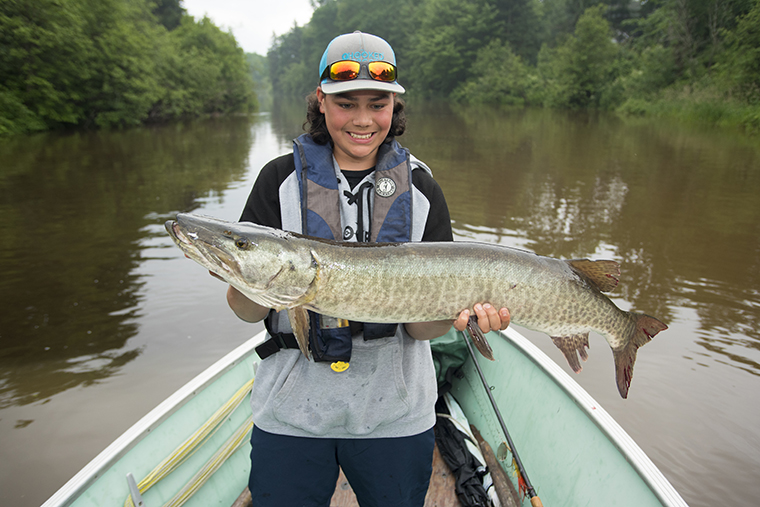 Getting there
Thessalon is 90 kilometres east of Sault Ste. Marie along Highway 17.

The rain has finally stopped as I walk a Zara Spook Magnum across a narrow stretch of stained water near the mouth of an inflowing creek.

“This is a great evening spot,” says Northern Outdoor Adventures guide, Todd Showan, with an infectious enthusiasm that has continued in spite of a full day of pouring rain. My arm is getting tired from casting muskie gear and I pass the rod off to Todd’s son, Ty, who is as eager as his father and has the stamina befitting a 14-year-old boy. 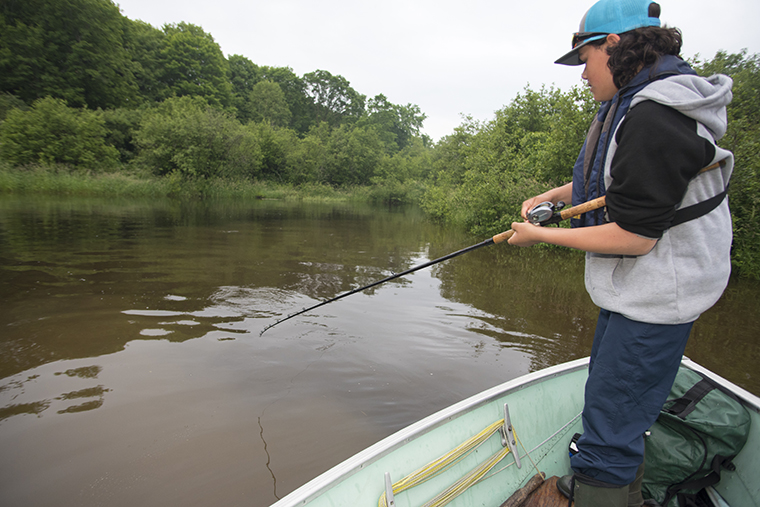 Ty continues to work the water where currents mingle between shores of thick alder and cedar. About three casts in, the surface explodes and he sets the hook into a good fish. We scramble for the net, but just as quickly, the fish is off.

“Change it up, Ty,” says Todd, as he hands him a firetiger Buchertail Muskie Spinner. “If he’s not going to take peanut butter, give him baloney.”

The wisdom of that statement would soon become apparent. 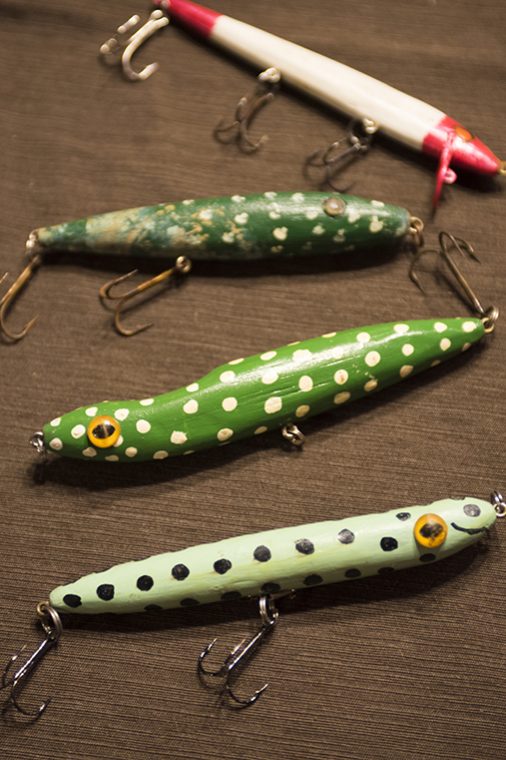 I first heard about the muskellunge of Lake Huron’s north shore from a Thessalon-based angler named Lloyd Boyer. He was a full-time fishing guide who also carved his own lures. Unfortunately, I never got the chance to get on the water with Lloyd.

Fast forward a few years and a six-foot-five inch tall OPP officer named Todd Showan stops by my house in Wawa to introduce himself. Turns out, he is Lloyd Boyer’s nephew, and before Lloyd passed away in 2009, he gifted his fishing gear and clients to Todd.

Todd and I make plans to get on the water, and that autumn I’m welcomed into Todd’s Thessalon home, where I meet Len, a client from Ohio who fished for years with Lloyd. Although Todd doesn’t use much of the gear his uncle left him, he has hung onto it, and we spend the evening going through the hand-carved minnow baits and topwater lures. 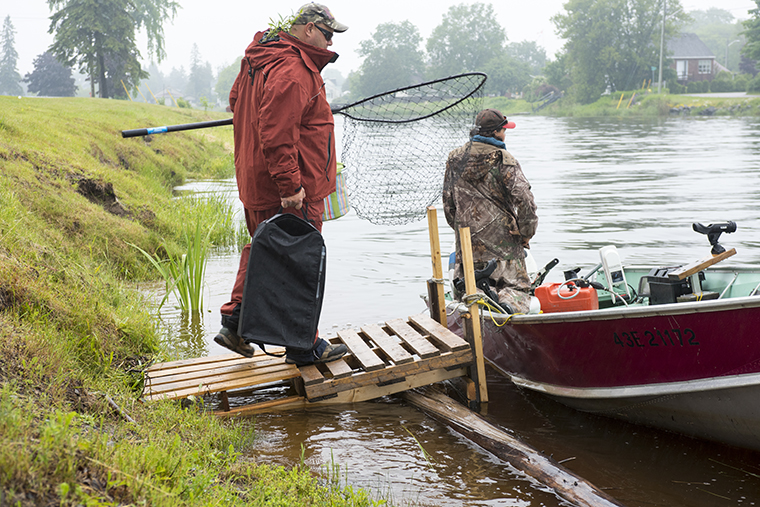 We spend the next two days casting and trolling shorelines of pine and granite on the clear waters of an inland lake east of Thessalon.

At the base of a sheer cliff, where weedy and boulder-strewn shallows drop to deep, a smallmouth bass chases Len’s glidebait, and behind it swims a muskie of just under 40 inches. On his next cast, the water explodes and Len is connected for an instant, before the fish thrashes to freedom.

That initial time on the water confirmed Todd’s passion for the muskie hunt, and guiding. Although I too am bitten by the muskie bug, the long days of casting heavy baits have exacerbated an ongoing problem in my right arm and my plans to return to the water have to be put on hold for several months.

Accommodations
Clients can rent Showan’s three-bedroom cottage on a lake north of town or book one of several hotel, bed and breakfast, or campground options in Thessalon.

It’s the end of June when I jump back into Todd’s 18-foot Lund. He has some longer rods and high-ratio baitcasters that make casting a little easier. We also have Todd’s son Ty with us this time, to help cover the diverse waters of this inland lake that range from steep drops-offs to broad shallow flats of rock and weed.

Todd drives the boat and orchestrates our casting. “You don’t need to get too cute here; there’s rock and wood and emerging weeds all over,” he says as we approach a dimple in the side of a pronounced granite point.

I draw a Top Raider past a clump of submerged vegetation and a large muskie surfaces for a look before swirling beneath the water to the right of my lure. Todd points and cries, “Ty, cast your bucktail…but it’s shallow so get up on your horse quick.” Although we work the area thoroughly, we don’t fool the fish.

Lucky with fish and fowl

It’s pouring rain the next day, but we gamely climb into Todd’s 16-foot Naden to work some muskie water closer to town. There are narrows, current areas, and lots of submerged wood, but runoff from the rain stains the water. Todd remains optimistic, explaining the characteristics of each spot with an intimacy that comes from more than 40 years of fishing this water. 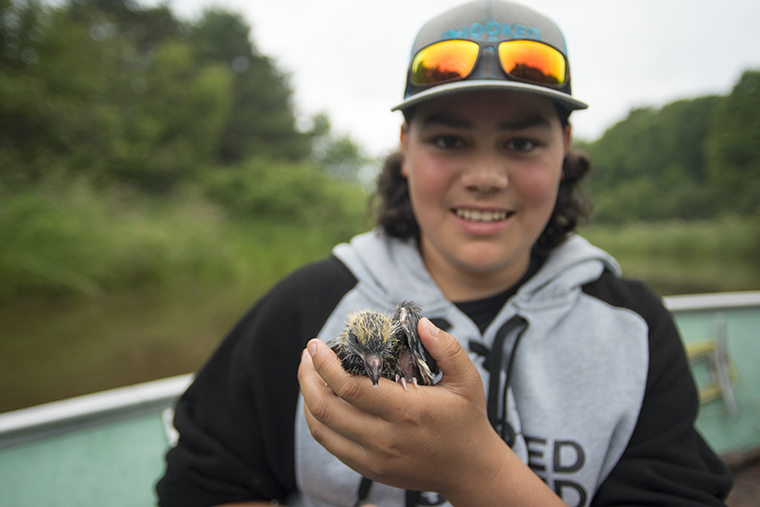 Ty quits casting when he spies something bobbing in the water, and quickly scoops up a baby bird. He slides the cold, wet pigeon into the front pocket of his hoodie, to recover for a later release back into the area.

“Lucky,” as Ty names it, was likely on course to become a muskie meal, because not long after it joins us, Ty hooks and loses the fish on the Zara Spook.

On his father’s advice, Ty changes to the Buchertail Bucktail Spinner and on the first cast his stout rod is loaded. The strong fish makes a series of hard runs punctuated by violent surface thrashing. The stained water makes it difficult, but eventually Todd gets the net under the fish and Ty hoists a beautiful 46-inch muskellunge.

Although I dearly wish I’d caught the handsome light-green fish, my arm is spent, and the best I can do is live the moment vicariously through Ty, who smiles as the big north-shore muskie swims away with broad sweeps of its tail. 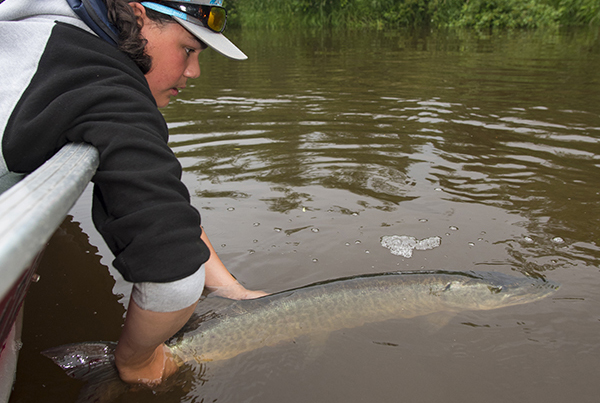 Scratching the surface of Temagami walleye

The best fishing in Quebec