I’m more of a specialist than a generalist when it comes to angling, but I do love to fish for all the species this province has to offer. I don’t think any species exemplifies this province more than the muskie. It has a limited distribution in North America, and Ontario is arguably its nucleus.

I’ve caught muskies on the fly before, but much of my experience was limited to the small, river muskie of the Kawarthas. To play with the legendary fish of Georgian Bay, I enlisted the help of JP Bushey, an Ontario OUT of DOORS Pike and Muskie columnist and full time Georgian Bay fishing guide, and Brian Slavinski, friend and fly-fishing guide. Slavinski fly fishes for muskies on his home waters of western New York, on inland lakes and the big waters of Lake Erie and the Niagara River. 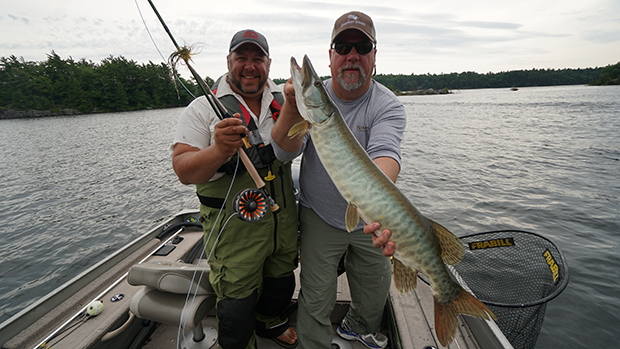 Tactics
Gear anglers who fish unfamiliar muskie waters tend to troll a lot, looking for fish. Fly anglers don’t have that option, and a guide like Bushey, who can hopscotch from hotspot to hotspot, is invaluable. We fished larger flats, saddles, shoals, and mid-lake humps. Some areas were large, so we would boat upwind of the location and drift over while fan-casting. Others where pinpoint — as Bushey called them, “the size of a garage door,” — that were worth three casts and then we were gone. “Fish hit at these spots on the first strip of the fly or crank of the reel handle,” says Bushey. “If you don’t catch them on three casts, they’re not there.”

Slavinski provided some much needed expertise on strategies, gear, and fly selection. Fly fishing for muskie is not for the faint of heart, or for those looking for a relaxing afternoon on the water. We each took turns casting while the other two looked for following shadows. With three guys in a boat, having one angler casting at a time is your safest option. Big hooks, and large weighted flies are not forgiving, and eye protection is a must. Alternating anglers also gives you downtime between spots.

Flies
Slavinski’s wild fly creations sealed the deal for us on a couple of Bushey’s hotspots. They have a big silhouette without being too bulky to cast. Jointed 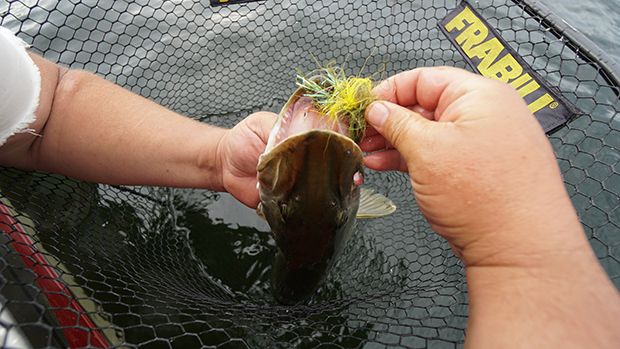 streamers up to 12 inches long are options, with modern synthetic fibres such as Craft Fur and Flashabou, providing size, shape, and movement while remaining castable. Slavinski is a big proponent of varying your retrieve. Making flies come alive in the water — strip, strip, pause, jerk, strip, strip. I, on the other hand, cast and strip back to the boat as fast as I can, sometimes placing the rod between my knees and stripping with both hands, looking for reaction strikes. A few times Slavinski would offer a friendly, “Slow it down.” — which put me into a fish.

Keep it simple
Casting muskie gear is not the easiest thing in fly fishing, but modern rods, flies, and line tapers are a big help. Concentrate on your casting and 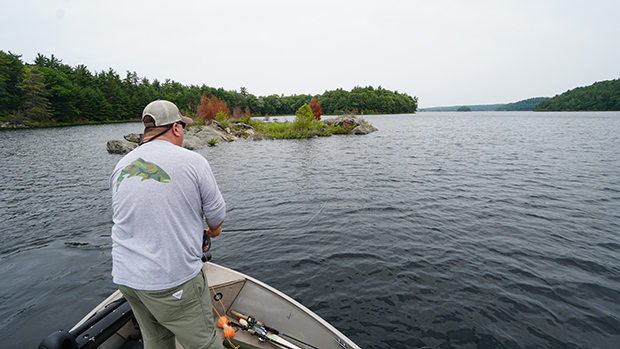 not on distance. With practice, distance will come. Get it out there on a straight line and work it back to the boat. Keep your rod pointed down directly at the fly, and strike with a direct connection, not with a sideways sweep of the rod. Slavinski is a big proponent of the “strip set” which many saltwater anglers do by setting the hook with a hard pull of your stripping hand and not with the rod hand.

In an afternoon of fishing, we moved three muskies and landed two. It was a great afternoon for any muskie angler — an exceptional one with a fly rod. Of course, the fish that wouldn’t commit was a jaw dropper.

For guided trips, contact JP Bushey at www.busheyangleguidedfishing.com. His muskie focus is on Georgian Bay, generally from Port Severn north through the muskie-infested waters of the Moon River, Parry Sound, and Pointe au Baril. The good news is that he says August is one his best months for muskie, which, as I write this, is just over a week away. 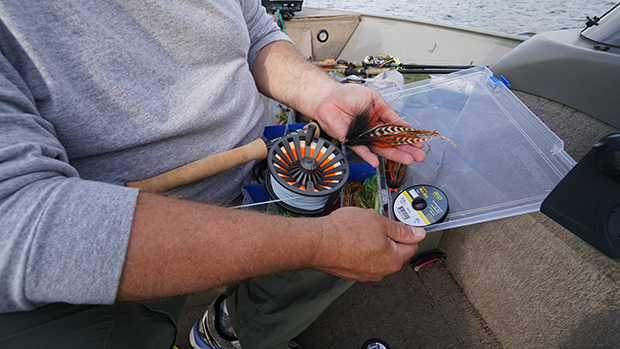 Gear
Rods: 9 and 10 weights from 8 to 9 feet. Many companies make “predator” type rods. Saltwater rods are also good options.
Reels: Lightweight with a large diameter or large arbour.
Lines: Many companies make pike and muskie specific lines. I like lines with a light sinking tip to get and keep the fly down about three feet. Floating lines are generally a bit easier to cast.
Leader: Some type of tooth- and gill-protection leader is a must, like RIO’s Powerflex Wire Bite Tippet, or 60-plus pound fluorocarbon tippet.
Flies: The world is your oyster when it comes to what you can create or buy. Larger is sometimes better, but not always — 7 to 12 inch offerings are standard fare. Some pattern options are Jared’s Outlaw, Double Deceiver, Barry’s Pike Fly, Drunk and Disorderly, Predator Pounder, Montauk Monster, and Dahlberg Diver. 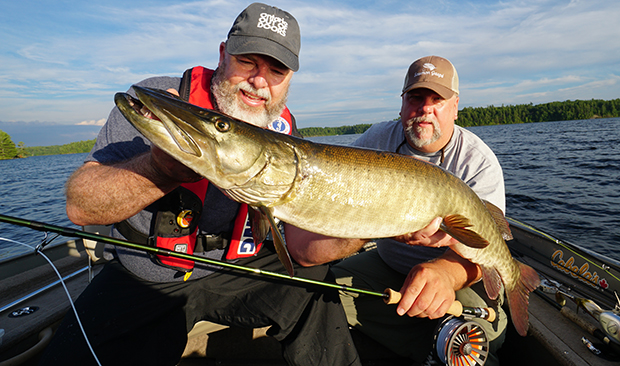