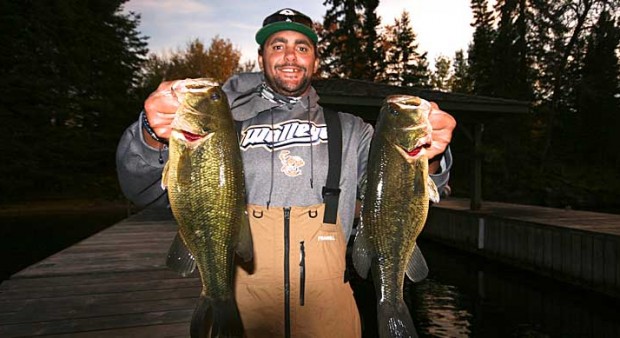 Winnipeg Jets defenceman Dustin Byfuglien, of Roseau, Minnesota, grew up spending his summers at a family cabin on Lake of the Woods. Fishing was part of his summer routine from an early age.

Big Buff, as he is known in hockey circles, quickly found a passion for flogging big lures for the many muskies that inhabit Lake of the Woods. He has landed some big fish over the years and has one of the most extensive collections of musky lures I have ever seen, including hundreds of inline blade baits, crankbaits and his personal favourite, topwater prop baits.

“One of the advantages of playing in Winnipeg is that I am only two hours from Lake of the Woods, so I get out there to fish quite often when I get a day off during the season — in the fall, winter, and spring,” said Byfuglien.

And just to rub it in a little bit, while I was on a day trip with Buff last fall he put a couple of big bass in the livewell late in the day simply to take a picture with the fish while standing on ex-teammate and Chicago Blackhawks captain Jonathan Toews’ dock. He texted the photo to Toews, who was in Chicago.

Toews biggest concern was if those fish were caught from beneath his dock.

Big Buff even finds time to compete in some northwestern Ontario bass tournaments, competing in both the Bassin’ For Bucks tournament on Lake of the Woods and the Fort Frances Canadian Bass Championship on Rainy Lake in recent years.

“I grew up on the lake at our family cabin and spent as much time as I could fishing and hunting,” he said. “As hockey got more serious I got pulled away from the outdoors, but I actually took a year off from hockey when I was a teenager and went ice fishing almost every day. Today I get out and do things when I get some free time.”

This is part 1 of a 3 part special on angling NHL-ers.

Peluso is all about the bass

King angler on the open water

Where to Fish in These 3 Cities