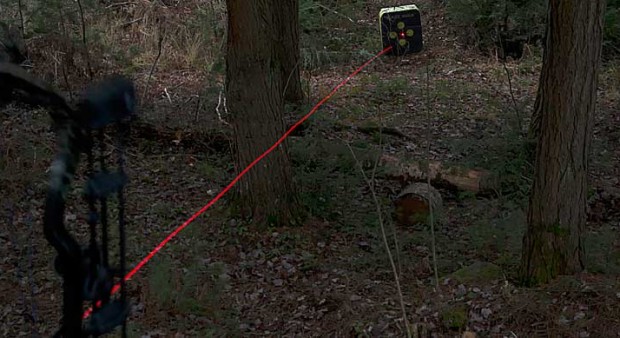 How many of us have sat in a tree stand or blind as the last moments of daylight fade into night, wondering whether that arrow we’ve just shot found its mark? We wait the standard 30 minutes, endlessly replaying the evening’s events in our minds, analyzing the sounds we heard and the reaction of the animal, driving ourselves crazy.

Enter the Lighted Nock
Around 2003, a company named Burt Coyote burst onto the scene with a product called the Lumenok that changed this scenario forever.

The Lumenok looks like a standard nock on the outside, but contains an LED, a tiny lithium battery, and 2 pieces of wire forming an incomplete circuit. When the Lumenok is fully seated in an arrow shaft the circuit is completed, either by the shaft itself, or by a uni-bushing, and the nock lights up. Both aluminum and carbon have good electrically conductive properties, though carbon arrows that have a high fibreglass content can be spotty on conductivity.

The Lumenok comes in several sizes and is designed to press-fit into the shafts of a number of different arrow manufacturers. It is typically kept a fraction away from fully seated, or unlit, while hunting, even while nocked and ready to shoot. When the string is released, it drives the nock forward, fully seating it into the arrow shaft, completing the circuit and lighting the nock, all before the arrow leaves the bow. The nock stays lit during flight, making it easy to see throughout its entire trajectory, especially in low-light conditions.

Naturally, this will give you a good idea of how well your shot was placed, and whether it passed through your target or not. Lumenoks usually stay lit until you pull them out of the shaft, breaking the circuit. This makes them incredibly easy to find in the field, no matter if your shot missed, passed through, or stayed with the animal.

A Great Idea
Actually, Lumenok is not the original lighted nock. In 1993, a decade before the Lumenok came to market, a company named Systmsports introduced a lighted nock called the Tailfire. The Tailfire was invented by John Ridihalgh, a nuclear engineer, mathematician, biotechnology entrepreneur, and a generally brilliant guy by all accounts. For whatever reason, the market wasn’t ready, and the Tailfire never caught on. Bromley Archery, the Canadian distributor for Tailfire, had trouble giving the darned things away. Go figure. But the Lumenoks sure took off.

Since Lumenok, many established companies have brought out their own versions of the lighted nock. There’s the LaunchPad, Nockturnal, Firenock, Tracer, Ignitor, and many more. Most follow Lumenok’s lead on design, while others have developed variations. Some use small switches or magnets for activation and a couple even incorporate tiny circuit boards and accelerometers.

The Advantages
Lighted nocks are easier to find in the field, and they go a long way towards helping you know whether you’ve hit your intended spot on an animal. They can also be used to determine whether your bow or your form needs any adjustment. When you release an arrow with a lighted nock, erratic arrow flight is immediately obvious, so it’s advantageous to take a couple of practice shots with them from time to time, just to check that things are still as they should be.

Things to Keep in Mind
There’s the cost to think about. While some lighted nocks are quite reasonably priced, others retail for upwards of $20 each. Also, battery life varies from roughly 8 hours to as much as 40 hours. Some nocks have replaceable batteries, while others must be replaced as a unit. It pays to do your homework.

It’s worth noting that most lighted nocks weigh roughly double what a standard nock weighs, so be sure to sight-in your bow using the exact nock, vanes, and broadhead you’ll be hunting with.

Anything Else?
Here’s something that’s crucially important to remember when shooting lighted nocks; they’re extremely easy to see and follow in flight, so make certain you’re not putting any more effort into watching them than is absolutely necessary. If you do, you’re likely to start dropping your bow arm and lifting your head as soon as the shot breaks. This will cause low-left hits for right-handed shooters. Practise with your lighted nocks of choice so that you’re well accustomed to using them, and be sure to follow through properly.

These little gizmos can be hugely beneficial to bowhunters. They’ll give you a really good idea of whether you’ve made a good shot on a game animal or not. This information will help you decide how long you should wait before tracking. Your arrow should be a breeze to find, which will give you more information about hit location and wait times. You’ll lose fewer arrows, which will save you money. Lighted nocks will even tell you when some aspect of your bow set-up or shooting form needs some attention.

It’s all really good, but even with these extras, we’ll still drive ourselves crazy after a shot at game. The only difference is that now we’ll have a little more information to do it with. Have fun.