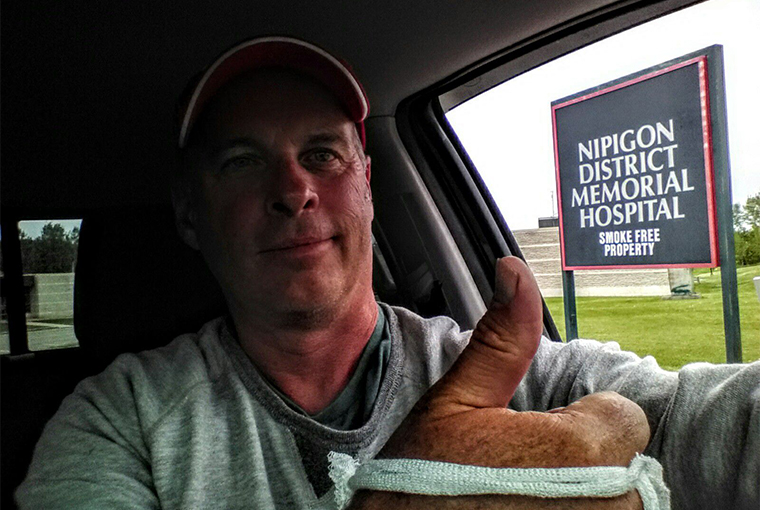 Like most people, I like to believe I’m careful and not clumsy.  In the bush and when hunting or fishing, I go out of my way to avoid trouble. Yet despite my best efforts, things still happen. One of these incidents is especially fresh in my mind as it happened to me in early June, just ten days before I started writing this blog. 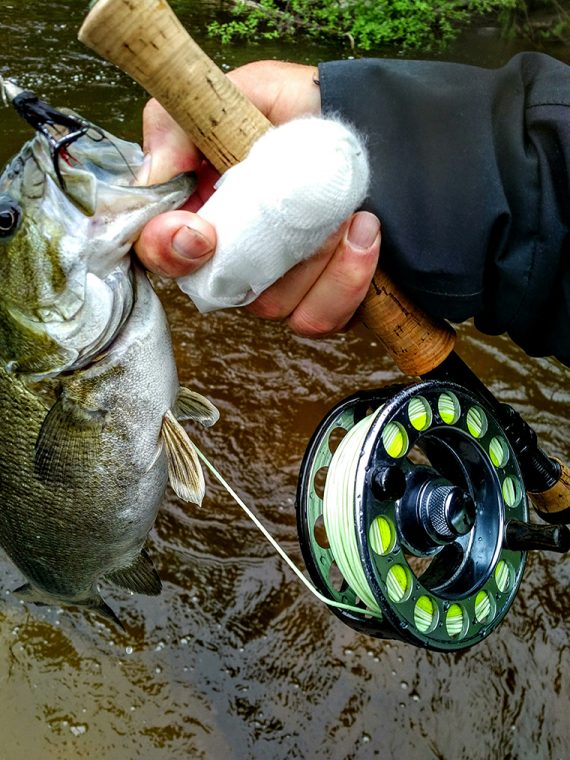 The day started as most of my fishing days do. I was unloading the boat and getting ready to release the clicker on the boat strap. This would allow the boat to slip backward on the rollers and float enough to be released from the hook and backed off the trailer. No biggie.

However, I’d just added a new spare-tire holder to my trailer and it butts up closely to the bow of the boat. The sharp angle of the launch was such that the tip of the bow got caught on the tire – a minor annoyance. I pushed with my left arm and used my right arm to brace. Somehow, when the boat slipped off the tire, it landed in a way that caught the middle finger of my right hand between the bow and the front roller. In the blink of an eye, my finger went from looking healthy to resembling a crushed grape.

My brain had the good sense to shut down most of my pain receptors. But, I had the numb feeling you get when you know something very bad has happened to your body, because you’re looking at it. The good news was I could tell my finger wasn’t broken. It was also still attached to my hand. For both things, I was grateful.

My first instinct was to get the first aid kit out of the boat. This meant bleeding all over the boat and the hatch to reach it. Luckily the kit contained a large roll of gauze which worked to wrap the wound. Band aids proved not up to the task of securing the gauze, so I needed something else. Electrical tape! I found some in the tackle box and got my finger all taped up. It was bleeding a little and hurt a lot, but at least I wasn’t lightheaded. I figured we could still do a couple of hours fishing.

“Where did all this blood come from?” asked one of my fishing companions as I pulled up to the dock.

“There was a little accident,” I said, holding up my McGyvered finger.

“Do you need medical attention?” asked my other partner, mildly horrified.

“It’s not broken and I’m otherwise fine,” I replied, knowing a hospital visit was inevitable. 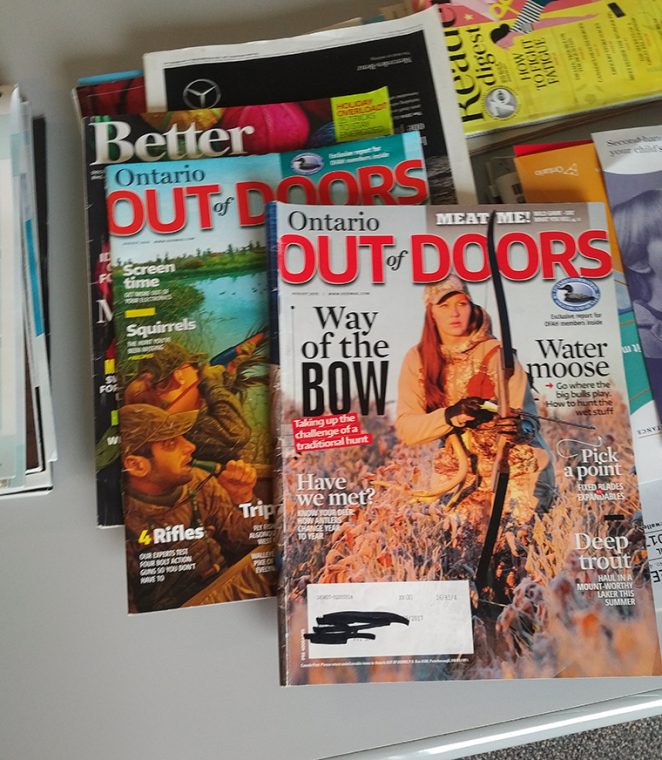 So we fished for a bit – or they did – since moving my finger was awkward and it was too freshly wounded to hold a rod. Luckily, the fishing sucked and we called it early. Off to the hospital I went.

Turns out, Nipigon’s hospital emergency department was a very good place to be on a Sunday at noon. For starters, they had the good taste to have copies of OOD on the waiting-room tables. And the nurses and doctor were helpful and outdoorsy. We had a great chat about fishing and other good things as my finger was cleaned up and properly wrapped. It was a pleasant experience as flesh-wound fixings go.

“Don’t get that bandage dirty or wet, Gord,” cautioned my lovely nurse as I headed out the door. I promised not to, although I didn’t make any other promises. A couple of hours later, I was fly fishing – albeit awkwardly – and even caught a few bass. And, my bandage stayed clean and dry.

One more little incident with a relatively happy ending. Hopefully that will be it for a while.

A goodbye to my favourite waders