What’s the deal with Ontario cougars? 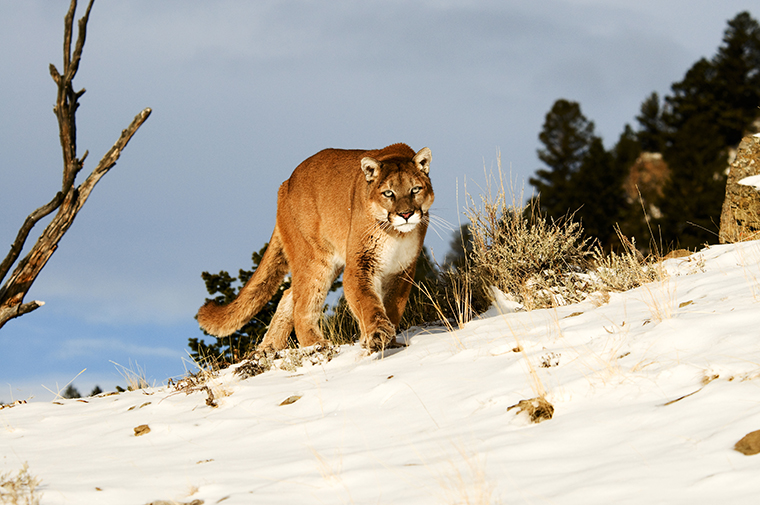 The very first cougar-sighting story I heard took place in my late teens. Some friends and I were working in a seedling greenhouse in Pass Lake, a rural community just east of Thunder Bay. We spent our days thinning seedlings and talking. A couple of the locals worked with us and the chat turned to strange sightings.

“There is a panther that lives around here,” said one of the young women. “I’ve seen it a few times running across the road. It has a long tail.” The other local working with her nodded her head in agreement. They didn’t seem to have any doubt about what they saw.

Although I knew the odds of an actual panther living in the northwest were low, this was the first outright mention of the existence of a large wild cat (at least larger than a lynx) in northwestern Ontario that stayed with me. Could it be? Could there actually be large cats in northwestern Ontario? Were cougars slinking through the woods I hunted and fished in?

Since that initial story, some 35 years ago, cougar sightings have continued to come in. Once I began my career as a journalist and broadcaster, tips, sightings, and other cougar-related information flowed in steadily. Some of them seemed legit, others, not so much.

Among the more dubious hot tips was a manila envelope with a very detailed account of how a cougar had been in this lady’s yard in rural Thunder Bay, frightening her. She thought I needed to know. A picture was enclosed. It was quite clearly a house cat.

Another, potentially more serious situation, happened in August of 2012, in Thunder Bay. A woman reported a cougar running loose in the city and alerted animal control. The “cougar” sightings were reported near a seniors’ home and a daycare. Police services made the unusual move of alerting the public to a possible cougar roaming the city. As you can imagine, the ensuing news reports — widely shared on social media — created a frenzy. But, when a video of the animal in question was filmed and shown on Facebook, things quieted down. The “cougar” was a fox with a bad limp.

Not all cougar sightings and reports have been so flawed. In the early 1990s, a respected biologist with the Ministry of Natural Resources (as it was called then), found tracks north of Nipigon. He made plaster impressions and brought them to my house for a look. (Yes, an MNR biologist who made house calls!) They did indeed look like cougar tracks and were certainly the largest cat tracks I’d ever seen.

Then there was the time well-known author, Charles Wilkins, was talking on CBC radio about a road trip he’d taken from Thunder Bay to Wawa. He mentioned — somewhat in passing — that a cougar had jumped across the highway in front of his car. The description of the incident, and the animal, sounded both accurate and believable, not unlike the dozens, even hundreds, others have shared with me over the years.

The sightings are from all parts of the province and run from fleeting glimpses to up close and personal. Anglers, trappers, campers, bikers, and skiers have all passed on their cougar tales. Sometimes it feels like I’m the only person in Ontario who hasn’t seen one — this despite spending many thousands of days outdoors in Ontario. Am I that unlucky?

Although I haven’t had any reason to doubt the possibility of cougar populations living in Ontario, the lack of hard evidence has bothered me. With tens of thousands of trail cams spread across the province, why no pictures? And no carcass? No road kill?

Then, in March of 2017, a cougar carcass was discovered near Thunder Bay, frozen and partially buried in snow on the side of the Boreal Road. It was emaciated, with a muzzle full of porcupine quills, but was indisputably a cougar. It had all its claws and was no one’s pet. When I saw the initial pictures pop up on my Facebook feed and realized they were taken in Thunder Bay, I sprang into action. This looked like the physical evidence I — and many other people— had been waiting to see: an honest to goodness dead cougar.

The ensuing story created a huge stir. Would it be the first verified wild Ontario cougar in a century? The Ministry of Natural Resources and Forestry (MNRF) took tissue samples of the cat and sent them to the U.S. for DNA analysis. Hopefully the mystery would be answered.

After months of waiting, the MNRF released the DNA results in October, 2017. The U.S. Forest Service had determined, with 95% certainty, that the cougar’s genetics were most closely related to individuals from the region of the Black Hills of Wyoming, South Dakota and northwest Nebraska.

MNRF Senior Media Relations Officer Jolanta Kowalski told me, “The animal is not part of a resident cougar population in northern Ontario.” At the same time, she noted that the province doesn’t possess DNA samples of resident cougars for comparison.

Needless to say, it was not the answer many of us had hoped for. However, without anything to measure against, saying a cougar is related to animals south of the border doesn’t mean it wasn’t raised or even born here. Animals migrate and populate. We are all Heinz 57s in the long run. Why should a cougar be different? No one really knows where that cat came from.

In the meantime, the presence of cougars — or lack thereof — will remain one of the greatest ongoing mysteries in Ontario’s out of doors.

When Gord Ellis’ article was first published, in the Jan-Feb 2018 issue of Ontario OUT of DOORS magazine, we heard from lots of readers who had their own experiences and photos to share. Below are excerpts from the many letters and emails we received: 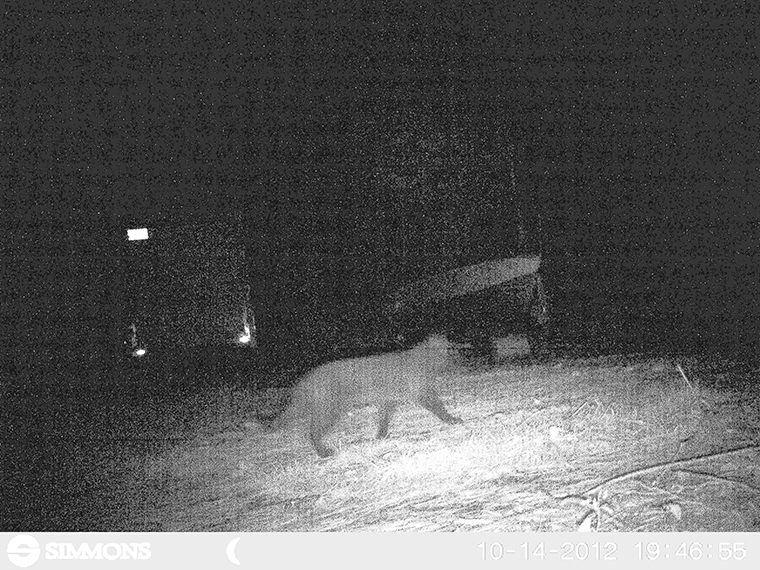 I was just reading my Ontario Out of Doors magazine this morning and noticed what I spied with my little trail cam. I’m sending you a picture that is not very clear and I don’t know if you will see it. It was taken in the Mattawa area.
Gary G.

I am a strong believer in cougar being in the boreal forest. In fact, when in Manitoba in the early ‘70s I did see one running across a field north of Winnipeg. When I reported it I was told there were many sightings credible sources during that time. That winter a person shot one in his chicken coop in Beausejour, I think about 100 km from Kenora. The pelt is in a Manitoba Museum, I believe. As I remember, North Dakota had an cougar hunting licence a few years back so it is not a great stretch to see some migration into areas with food and no other cougar or other large predator competition.

With respect to having never seen a cougar yourself, given the miles under my boots, often living in tents well off road, I can say I have never seen a lynx, wolf, or bear in the forest: wolves in fields north of Thunder Bay, bears around my camp site, and lynx on roads — one wolverine on a road up the Black Sturgeon. But in the wild they successfully avoided me. These are all very shy animals as you know and it is understandable why you might not see them or a cougar. As a side note, I have a friend near Murillo that says he sees cougars every now and again but doesn’t tell any one because too many people would show up to look around.

My daughter lived in Canmore, Alberta for a while and got to know a person working on the interaction of cougars and grey wolves in Banff National Park. She said you would never see a cougar in the wild because they are so shy. Her work was interesting and can be found at this link: https://www.jstor.org/stable/42901855?seq=1#page_scan_tab_contents.

Apparently they do not like living with wolves; a limiting factor for cougars in your home bush? Sounds like it might be.
All the best,
Ron C. 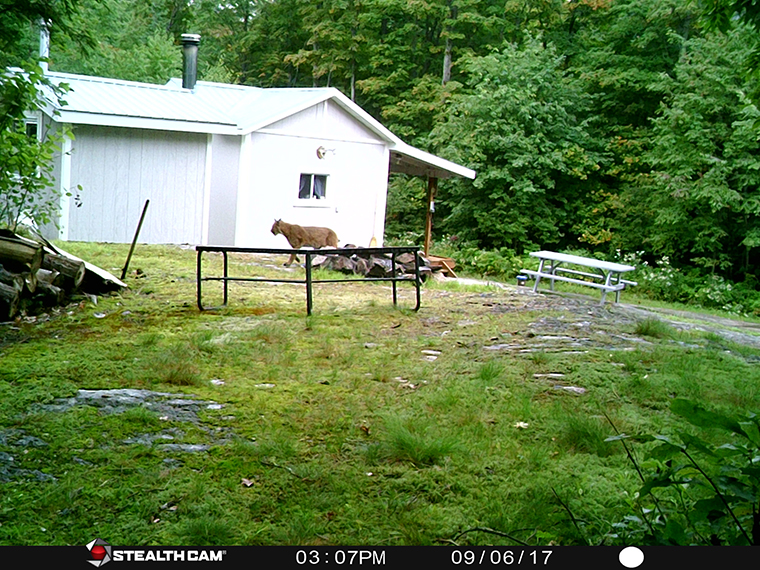 This picture was taken just south of Ruth Lake, Nipissing Township.
It’s too big to be a bobcat.
Regards,
Peter M.

While I live in Ontario I grew up in New Brunswick and have seen eastern cougars and their tracks.
On two occasions over a two-year period while delivering trucks out west I have stopped for a break along lake Superior where one can pull over and walk along the gravelly and rocky shore. Both times I saw cougar foot prints. Both were tracks of a mature cat. (It too was between Wawa and Thunder Bay.)

Also down along the Niagara escarpment near Rattle Snake point a few years ago I read a report where a large cat was robbing chicken coops.
Dan B.

I have been reading your article “On the prowl” on the Jan.-Feb. 2018 issue of Ontario Out of Doors. I just thought I would pass these trail cam pictures on to you. Back in Feb. 2013, a couple of neighbours were riding horses through our property. They told me they had seen “huge cat tracks” on the hydro easement. I had a trail camera set out in the area so next chance I got, I checked it out. These are untouched images. I still have the chip. Unfortunately trees have a habit of being in the wrong place at the right time.

One MNR type said cougar, one said fox, one said coyote, another mentioned bobcat. You be the judge.

I am 79 years old, and have been hunting since I was 13. I know the difference between the above mentioned. In the early spring of 2013, back on the easement I found an approximate 9-foot circle where the grass was all clawed/raked into a mound in the centre. I did not find any scat. Also, in the same area, wide scratch marks in the sand, approximately 6 feet long in a straight line. I know there are bears on our property from time to time, but I don’t know enough about bears habits to say whether it was a bear or not.

One image shows something sticking out to the right of the animal. A guess on my part thinks a deer leg. No real proof. MNRF dismissed the images as unidentifiable.
Regards,
Ivan F.

It may seem that we have no cougars in our range but in the summer of 2013 a young pregnant female made quite a stir in our area. She came in early spring and stayed to have two cubs and all three disappeared in the fall. We had brood mares and were quite aware of her presence. Her range covered an area from Wingham to Listowel. What I understood was she was from below Hwy 402 and 401corridor and that they were missing one of about 20. They are very human savvy and blend in very well.

That is unless you are heading out to hang clothes on the line and one is lying under the apple tree!
Thanks,
Jill

This email is in reference to Gord Ellis’s article “On the prowl.” I live on Fort Frances and have a game cam picture I thought Gord would be interested in seeing. It was not my game cam photo but one of a reputable friend. It was taken in the Stratton area near his sister’s farm in 2013. The “animal” is walking right under a ladder tree stand that can be used as reference for size. From what I understand it was shown to the MNR and identified as a potential raccoon. Take a look and be the judge…
Paul F.

Join the conversation about cougars in Ontario here.