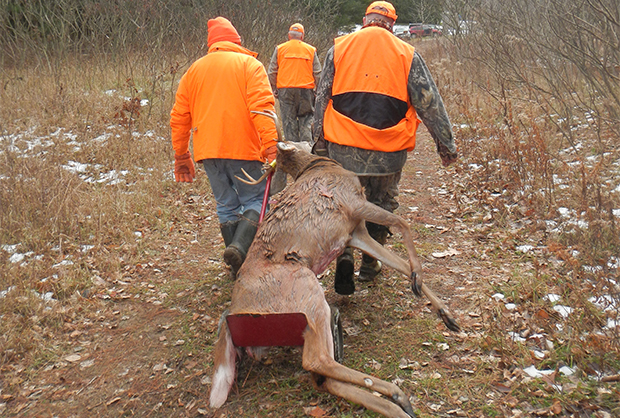 Typically weighing between 100 and 200 pounds, a deer is not a huge weight for two or three hunters to transport a short distance. But what if you need to cover a mile or more, or you’ve harvested more than one deer?

Our group was in such a situation a few years ago. None of us owned a quad and landowner restrictions meant we couldn’t drive a truck in.

DIY
Make your own pulling ropes:
-Start with six feet of rope
-Cut two pieces of one-inch dowel, four inches long (an old broomstick will do)
-Round the ends of the dowel with sandpaper
-Drill a hole at the two-inch mark on the dowel using a drill bit slightly larger than your rope, to allow the rope to be fed through it
-After feeding the rope through the hole, tie a knot large enough to stop the rope from feeding back through.

A game cart is sometimes the perfect thing for transporting deer, but even it isn’t always the solution. That’s when a little innovation using common household objects comes in handy. Here are some things we’ve resorted to over the years:

Pulling ropes
Someone in our group always has pulling ropes in their pack. These are simply short lengths of rope with a piece of dowel for a handle at each end. The rope is wrapped around the deer’s neck, chest, or antlers and provides some lift and leverage while hunters on each end of the rope provide the pulling power. 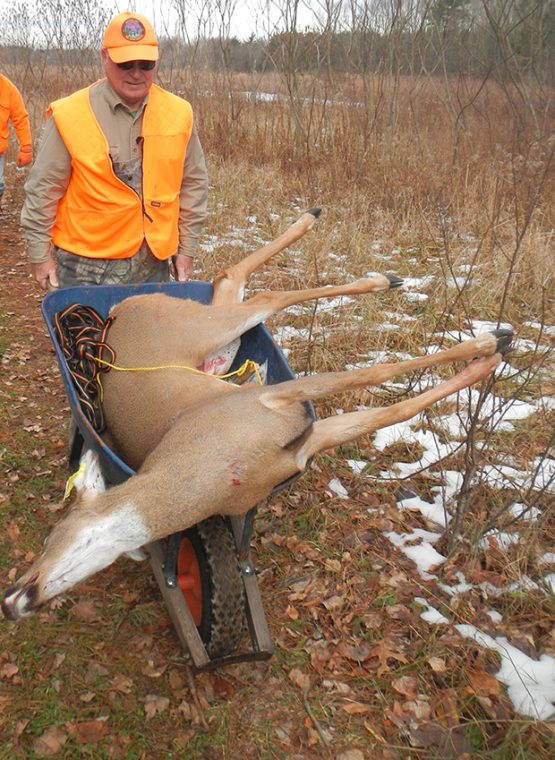 Wheelbarrow
Made for carrying heavy objects, a wheelbarrow works well as long as the deer isn’t too large. Legs hanging out can make it a challenge to keep the body centred in the wheelbarrow.

The advantage of a wheelbarrow is most people have one and it’s easily handled by a single hunter or multiple hunters taking turns over long distances. The large wheel make it able to handle varying terrain. The disadvantage is you’re limited by bucket size and it isn’t great in heavy wooded cover.

Moving dolly
Another household item that can be used to move deer is a moving dolly. It can’t handle as rough terrain as well as a wheelbarrow, but it will do well on a trail. And deer can be strapped to it.

Toboggan
If you’ve got snow underfoot, strapping a deer on a toboggan and dragging it out is an option. The disadvantage is brush and grass can grab at the straps, forcing you to repeatedly retighten them.

Get our complete guide to butchering your deer here.

Ice fishing sled
An ice fishing sled is a better choice than a toboggan as its side walls will contain the deer. Larger sleds are better in most cases. Be careful though, as the sled can still flip over if there is more than one puller and they aren’t pulling evenly.

Travois
A traditional device used by Indigenous peoples to transport goods, a travois is a support made of two branches lashed together in a v-shape with some cross-members. While easy to build, the hunter needs to have permission to cut any branches onsite. You also need some rope to lash the branches together. A travois is useful with or without snow cover.