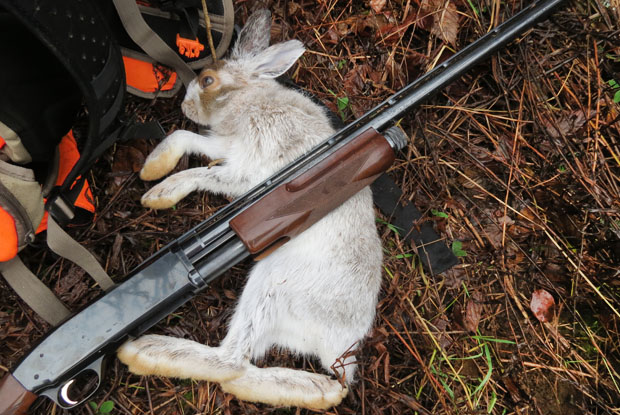 Most hunters recognize that success in the field depends a lot on timing.

Hunters are likely to take more woodcock when their hunts coincide with the arrival of new flights from the north. Similarly, the most exciting deer hunting occurs during the rut, when bucks are careless and on the move. And, we all know the finest duck hunting occurs when the migration is in full swing. The same can be said for grouse hunting – it’s far better when the leaves are down and you can actually see what you have flushed.

Within every season there is a period that’s best for the hunter.

That thought occurred to me while I was crawling into a hawthorn thicket to retrieve an ivory white snowshoe hare I had just shot. Clearly, for the hare, nature’s timing couldn’t have been worse.

If our encounter had been three days later, on the day of our first good snowfall, I might never have spotted it. But on that day, it stood out like the proverbial sore thumb. There wasn’t a flake of snow in the meadow – only late autumn shades of brown and tan. The hare’s white coat didn’t exactly blend in with that.

I’ll admit, as it broke cover my first thought was, “Hey, there’s goes a really short whitetail.” I was still in deer hunting mode, I guess.

By the time that thought was rejected, the hare was just sitting beneath the hawthorns, completely unaware that its premature winter coat betrayed its location. It was a bit unfair I guess. Then again, they rarely give me a sporting chance either.

The hare was just sitting beneath the hawthorns, completely unaware that its premature winter coat betrayed its location.

That hare, my first this season, is hopefully, a harbinger of things to come. You see, they seem to be making a slow comeback here – enough to make hunting them a distinct possibility once again.

And this has a lot to do with timing on a larger scale. Hare populations, we are told, tend to rise and fall in a steady cycle that repeats itself every seven to 10 years. I’m hoping the next year or two will see that cycle hit its peak near my south-central Ontario home.

I can only go by what I have observed. Five years ago, they were a rarity; in the last two, however, I’ve definitely been seeing more and I’ve spoken with other hunters who have noticed more, too.
I can tell you this much. An upswing in numbers would be really good news for a fellow who gets a little antsy after too much ice fishing.

With that hope in my heart, I’ll get out again this week and cruise that hawthorn-infested meadow, looking once again for grouse and hares. But, while the grouse ought to stand out a little more once they leave their roosts in the conifers, I’ll have to look harder for the hares from here on in.

The snow is firmly down and, for them at least, the timing couldn’t be better.

Setting your own limits