Spending Sunday at the range I recently spent a really enjoyable day with my friend Colleen MacLeod, a Range Burlington firearms instructor, 22 ladies, and several male volunteers, for Ladies’ Day at the Range. With a steaming coffee in the cup holder, I was on the road by 6:30 a.m. to make it for the 9 a.m. start.

As an outdoor shooter, January isn’t much fun at my home range, so I was excited to take part in this indoor event, which sounded like it was going to be equal parts fun and educational. It delivered as promised.

Though it was my first experience with handguns, it was Colleen’s third year running this program, and I soon learned why it’s always a sell-out. A few attendees were local, but most of us had travelled distances in typical Canadian winter conditions, so you know we were keen.

Mothers, daughters and lone shooters
In the mix were women of all ages: a few 20-somethings, some in their 60s, and every age in between. We started the day with coffee and intros, then Colleen and her crew broke us up into small groups for some classroom handgun-safety instruction.

Like pretty much everything new I try, I found there was more to it than expected. But, as we each took a turn loading and unloading the .22-calibre pistol under Colleen’s watchful eye, we got the hang of it.

On a break, Melissa from Girly Gun Gear presented some of her firearms-themed apparel and most of us indulged in a little retail therapy. I’m hoping my new T-shirt will pay off in tighter groupings at the range this summer. It’s all in the presentation, right?

When I wasn’t shooting, I took quick hikes outside, where deer tracks came right to the property line. Clearly, Burlington deer are not intimidated by the firepower coming in and out of this thriving club.

The pizza lunch was delicious (I love any meal I don’t have to make) and then we were over to the indoor range for the afternoon. Again in groups, we took turns receiving one-on-one support from the range officers, who tirelessly and patiently made sure we all got some rounds in at 10 yards. When I wasn’t shooting, I took quick hikes outside, where deer tracks came right to the property line. Clearly, Burlington deer are not intimidated by the firepower coming in and out of this thriving club.

On the range, I quickly learned that no part of my transitional corrective lenses were the right prescription for these shorter guns. There was just no way to focus. Apparently many enthusiasts have glasses custom-made for shooting. Still, after a bit, I managed to keep it on the paper. Some of the ladies were quick studies and should consider framing their targets.

A nice change
The lighter weight and reduced recoil of the handguns I shot (a .22 calibre and a 9 mm) were a nice change from long guns, but for me, range practice is mostly about making the best shot possible when I’m hunting, so I’ll likely stick to the shotgun and rifle on an outside range.

We finished off the day with a prize table that saw every participant leave with a gift and a goodie bag.

If you are at all curious about how it feels to shoot a pistol or revolver, I encourage you to search out a session like the one Colleen offers, where everything is provided, including top-notch teaching and the highest safety standards. It’s a wonderful way to spend a wintery Sunday. 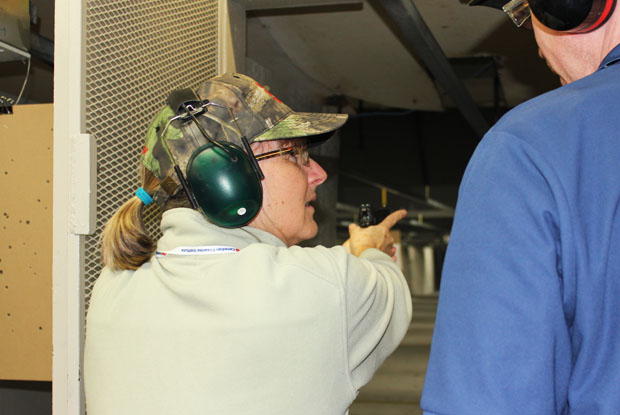