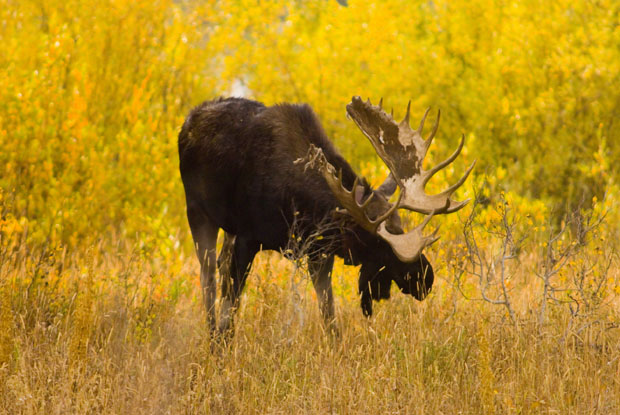 The Ministry of Natural Resources and Forestry (MNRF) is proposing to shorten the hunting season for moose calves this year and delay the start of the season in 2016.

The MNRF says recent moose population surveys have shown declining numbers of moose in some areas of northern Ontario. Before implementing more changes to the hunting season, however, it wants to hear from Ontario residents.

The proposals follow drastic cuts to moose tag allowances in certain Wildlife Management Units (WMUs) in 2014. In the Thunder Bay area, for example, there was an 87 per cent reduction in adult moose tags last year and in the Kirkland Lake area, the reduction was 93 per cent.

Project Moose
This year, in a project dubbed the Moose Project, the Ministry has developed an online survey calling on Ontario residents to provide input on the proposed changes. It says the changes were developed in response to pressures such as predators, parasites, hunting, climate and changing habitat.

As a result, the MNRF has proposed shortening the hunting season for moose calves to two weeks in northern Ontario starting in 2015, saying fewer young moose will be hunted so more calves should survive to become adult moose.

As well, the ministry proposes to delay the start of moose hunting season across much of northern Ontario by one week beginning in 2016 to allow more time for the rut to take place before gun hunting begins.

“This posting represents our response to the first phase of consultations as we work to address the declining moose population as evidenced from our moose aerial inventory,” Bill Mauro, minister of Natural Resources and Forestry said in a statement released last week. “The phase two consultations will be used to further define our response to bring forward additional options to be considered for implementation.”

OFAH offers response
In response to the proposals, the Ontario Federation of Anglers and Hunters says the province needs to stop focusing its management efforts solely on licensed moose hunters and start managing moose populations.

Although the OFAH acknowledges that some WMUs would benefit from a reduction in calf harvest, it says a two-week calf season is overly restrictive and could result in crowding and poor hunt quality, while making it difficult for hunters to accommodate fluctuations in weather, work schedules and hunting preferences.

“While we are encouraged by the ministry’s commitment to addressing Ontario’s declining moose populations and its reassurance that non-hunting factors affecting moose will be examined, we don’t agree with the specific changes being proposed,” said Mark Ryckman, OFAH senior wildlife biologist.

The federation suggests hunters go to the Environmental Registry website and search for EBR posting [#012-3413] Amendment to regulations under the Fish and Wildlife Conservation Act for moose hunting in northern Ontario and submit formal comments to express their opinions.

In a bid to encourage support through social media, the OFAH has also created the hashtag #ONMoose and is encouraging its supporters to use it to respond to the EBR.