Planking and other good things 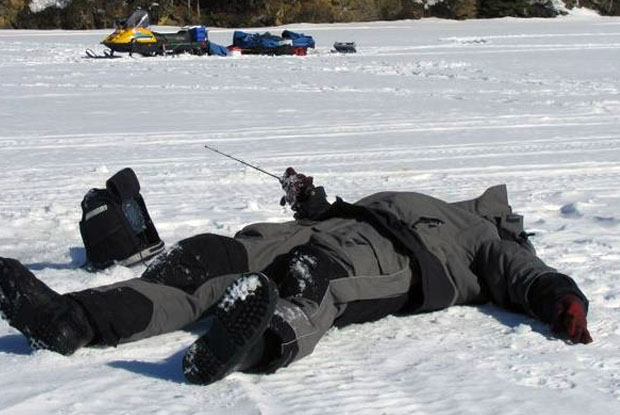 It’s a fact of my life that I’m not always as well rested as I could be. This is something many of you live with, I know. But some of us rest when they’re exhausted and others of us try to push on through.

I’m in the latter group.

In my 20s it wasn’t really an issue. If I missed a few hours sleep it was no big whoop, I’d catch up with it at some point. So there would be late night activities until the early hours, followed by a couple hours of sleep and then a solid day of ice fishing. I’d sleep when I was dead.

The more domestic life, post marriage and kids did not allow for more shuteye. Not at all. It was just why I wasn’t sleeping that had changed. Diapers, giving bottles and other child rearing things cut into that magical eight hours we are all supposed to get.

Once again outdoor activities were done on a low tank of R.E.M. This was just how business was done. It was my assumption that at some point I’d be perpetually well rested and able to live like normal people are supposed to, with predictable sleep patterns, etc. Life would be like a Sleep Country mattress ad.

Well, as I write this I’ve slept eight of the past 48 hours. It’s just the way it is. My unusual work schedule, which lately has included 4 a.m. wake-ups to read the news on CBC radio, coupled with writing, outdoor and musical exploits plus other life choices has led to some chronic sleep debt.

Luckily I consider myself a reasonably energetic guy and carry on as best as possible. This; however, has lead to catching sleep wherever and whenever it seems appropriate, sometimes in less than graceful circumstances.

Luckily I consider myself a reasonably energetic guy and carry on as best as possible. This; however, has lead to catching sleep wherever and whenever it seems appropriate, sometimes in less than graceful circumstances.

For instance, my friends seem to think my propensity for laying down and resting at all hours is odd. To me it’s nice to rest a bit on the ice or in a boat. But they say I’m “planking.” I say it’s “resting my eyelids.”

The so-called planking doesn’t usually last long, but it’s very rewarding. It’s like being in a sensory deprivation tank for three intense minutes, just in a dark bliss. Sometimes when I plank, I’m still fishing. Clinging to the rod as the curtains drop.

I’ve yet to lose a rod doing this, but there have been a few close calls. Trolling and downrigging on big water really seems to bring out the horizontal in me. There is something about the rocking of the waves, the bobbing of the downrigging rods, and the endless wait for a strike that’s very calming.

Of course any of you who hunt have likely had a few unscheduled siestas, especially if you’re sitting in a blind or even a tree stand. Of course, this is why anyone with a survival instinct wears a safety harness in a stand.

It’s incredible how fast the tired brain can hit your off switch when you least expect it. Although yours truly saves most of his hunting sleep for the truck rides to and from wherever we are going (except when I’m driving), there is one type of hunting that makes me want to sleep and sleep hard.

That’s turkey hunting. The deadly mixture of early mornings, warm clothing, and long periods of quiet make this hunter drowsy. This is not a good thing if you like to kill birds.

One memorable time I could hear gobblers thundering and yet the arms of Morpheus were encircling me. It might have been my perfect little throne at the base of an oak, which allowed me to sit in a perfectly supported position, that made sleep so easy.

Anyway, after fighting a losing battle all morning the eyelids won. After a couple of minutes of lights out I awoke with a start. There, standing in front of me at 20 yards, were three jelly heads. All six beady eyes locked on mine. I tried to lift the gun and they were gone like my pride.

No lesson was learned. That’s just the way it is when you are a plank master.