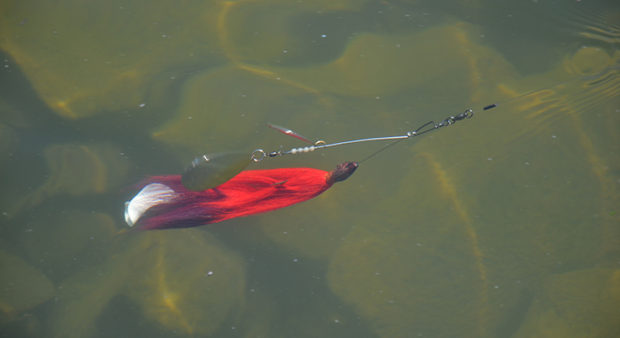 Safety-pin-style muskie spinnerbaits are a bit of a head twister for me. They have massive advantages for muskie fishing, yet many lunge anglers have nary a one in their tackle boxes, which are often dominated by in-line bucktails. Why? I don’t quite know. Muskie spinnerbaits often outfish all other lures by a blackmarket margin.

When you compare a spinnerbait to an in-line bucktail spinner, the advantages of one over the other are not really clear. On the water, though, they often leap out at you.

Spinnerbaits are more weedresistant. Their wire arms deflect much of the vegetation. They often come with single hooks that slip through weeds and over obstructions, without affecting hooking ability. You can weave them through bulrushes, thick cabbage beds, and even stump fields without constantly fouling and snagging.

Single- or tandem-hook spinnerbaits are, for my money, also the easiest lures to hook and hold fish with, while making for fast releases.

Spinnerbaits are also versatile. They’re good throughout the season and can be fished shallow and deep, around rocks, weeds, wood, for suspended fish, and in clear or murky water. It’s rarely a bad time to cast one and they also work well trolled. They’re a multi-tool muskie lure.

Weed ways
Saying that muskie love aquatic vegetation is not a news flash. Even spots dominated by rock habitat are helped by a few sprigs of cabbage.

One of the best ways to fish weeds is to “bulge” a spinnerbait over them, especially on calm summer mornings and evenings when the water’s warm and the fish are active. The trick is to reel just fast enough to bulge the surface with the spinner blades, without breaking through. The beauty of this technique is it fishes like a topwater, but has the flash and vibration of a spinner. When conditions are right, this can really turn on big muskie.

Another option is to work weed edges and holes. By choosing a spinnerbait with smaller blades or switching out bigger spinners with smaller ones, the lure will run deeper, probing the base of weedlines where active muskie often hang out.

To fish gaps in weeds, reel fast, bulging the surface and pulling the spinner over the major vegetation, then drop the rod tip and slow down the retrieve, letting the spinnerbait work deeper in gaps or holes. Speed up again to bring the lure up and out of the hole and over the weeds again. Muskie often hit the bait as it speeds up, so be ready to set the hook and manhandle the fish out of the weeds, if necessary.

This style of fishing is especially good on sunny summer days when muskie often move into thick weed mats. Use stout gear and stainless steel singlestrand leaders to help cut the weeds.

Trolling tips
While spinners in general are considered casting lures, spinnerbaits are almost better trolled. Speed-trolling big spinnerbaits is a must-do technique for both suspended and weed-flat muskie.

Because the bulk of the volume and weight of the spinnerbait is below the spinners, instead of behind them, as are an in-line bucktail’s weights, hair tail, and other dressings, they can be trolled at high speeds and remain effective. In warm water, a muskie’s metabolism is running at high and, in many places, they’ve seen more then their share of lures. A slow lure often garners little interest, but one that’s flashing and moving fast high in the water works on the fish’s predatory urge to chase, as well as not allowing it to inspect the lure for long, thus triggering a reaction strike. Add to this that muskie often seem to be turned on by the sound and commotion of a boat’s wake, and you have a technique that can work wonders.

Speed-trolling spinnerbaits excels on large sparse weed flats. With few defined edges or other structure to concentrate the fish, casting these areas becomes a marathon task, even by muskie-fishing standards. However, these areas often hold plenty of muskie in early summer, as they’re often full of suckers and other preferred forage fish.

Simply troll as fast as you can, while keeping the lure’s blades functioning anywhere from 10 to 50 feet behind the boat, and thoroughly cover the flat. Make lots of S turns to change the speed and direction of the lure, as this can trigger a hit.

Another time trolling spinnerbaits makes sense is, oddly, over deeper water. Summer muskie often suspend during the day within the top 20 feet of the water column, but near fish-holding structure like drop-offs, shoals, and weedlines. By speed-trolling spinnerbaits in the deep water around the structure that normally holds fish, but seems vacant, you can often contact them. The boat seems to excite muskie holding below, and once they wake up after the boat passes, they see the flashing spinnerbait and smash it. Troll fast to cover lots of water and make sure your drag and rod holders are tough enough to hold up to a big muskie hitting at high speed on a short line.

Spinnerbaits deserve a spot in every muskie hunter’s tackle box. Throw them this summer around weeds or troll them over flats for suspended fish. Try them a few times and, like me, you will be scratching your head, wondering why more muskie anglers don’t use them.