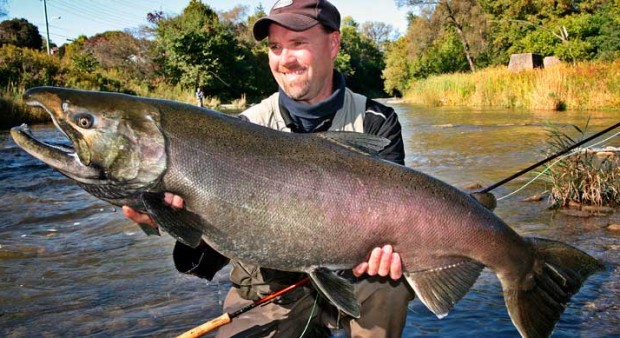 His fish, caught on Sept. 24, 2013 at the mouth of the Ganaraska River in Port Hope weighed 29 pounds, 31⁄2 ounces with a length of 40 inches and girth of 24.25 inches.
Hales says he used an “old 9-weight, 11-foot Diawa fly rod” to land the massive coho, which sucked up his Crystal Egg fly offering.

Having worked as a fisheries technician for the Lake Ontario Management Unit, he had lots of experience working in the salmon program identifying species, and he had seen a lot of large coho “monsters in the 25 and 26 pound range,” so he had no doubt it was a potential record.

“After it rolled and jumped, I realized this was no chinook but a big coho. It was just starting to turn colour.”

He submitted his fish, which was a natural with no clipped fins, to the OFAH Ontario Record Fish Registry, which recognizes the largest fish angled legally from Ontario public waters. This spring it was declared a record.

The former coho salmon record was held by Sandy Smith, who caught it in Lake Ontario near Pickering on August 12, 1998. It weighed 28.64 pounds with a length of 42.0 inches and a girth of 18.5 inches.