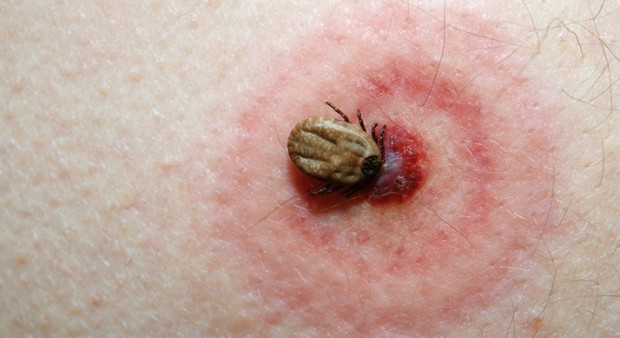 Pop culture’s recent focus on blood-sucking vampires and brain-eating zombies is entertaining, but far from realistic. However, there is a certain kind of blood-sucking mini-monster among us that poses a real threat to hunters, anglers and outdoor enthusiasts — the tick.

Signs of Lyme disease
Early signs of Lyme disease include fatigue and flu-like symptoms such as chills, fever, headache, muscle and joint pain. A circular rash or “bulls eye rash” appears at the bite site in about 70% to 80% of cases. The Centers for Disease Control and Prevention says the rash begins at the site of a tick bite anytime between 3 and 30 days, but the average is about 7 days.

Avoiding ticks
The preferred habitat of blacklegged ticks is forests. Generally, ticks feed on mice, shrews, voles, squirrels and deer. “Where those animals live and transverse is where you’ll find the ticks,” said Dr. Robbin Lindsay, research scientist with the Public Health Agency Canada. Through his research he has found ticks are more common in woodlands where there is an overstory, as opposed to grasslands.

In Ontario, blacklegged ticks are mainly found along the north shore of Lake Erie, Lake Ontario and the St. Lawrence River. Long Point, Rondeau Provincial Park and Point Pelee were among the first areas ticks were found in Ontario.

However, ticks can be found in isolated spots anywhere in Ontario if they hitch a ride on migrating birds.

Here are some recommendations for preventing tick bites:

Temperatures need to drop below -4˚C before ticks become inactive and retreat into the leaf litter on the ground.

Lindsay pointed out if the temperature is, for example -10˚C, the temperature on a south-facing slope on a sunny day could be above zero, making ticks active in that isolated area.

Natural alternative
A natural tick repellent can be made by mixing 1 part tea tree oil with 2 parts water and spraying it on your clothes.

DEET is the only insecticide approved for sale in Canada that will ward off ticks. If you are in the U.S. you can purchase permethrin, which is legal to bring back into Canada for personal use, but not for resale.

DEET is a tick repellent and permethrin kills ticks. It is applied to clothing, not the skin. You can also purchase clothing products that are impregnated with permethrin.

Lindsay explained the insecticide approval process is driven by demand. Because the range of the ticks is limited here, there likely isn’t a large enough market for permethrin in Canada yet. “I suspect in the next few years with the expansion in the range of the blacklegged ticks, the market will be big enough,” he said.

After an encounter
Lindsay recommended showering within 2 hours of being in tick habitat. Ticks won’t wash off, but removing all clothing will allow you to give yourself a thorough examination.

“The shower is really just an extension of the tick check,” he said.

Also, giving your clothes a good tumble in the dryer will kill any ticks that may have hitched a ride inside. A couple of American studies have found dryer heat can kill ticks and Lindsay recommends 15 minutes on the hot cycle.

Tick removal
If you find a tick on your body, use a pair of tweezers and firmly grip it as close to the skin as possible. Pull it straight out without twisting. Don’t squeeze the tick, this could release the bacterium.

After removal, wash the bite site with soap and water or disinfect with alcohol. Put the tick in a vial and note the date and time of removal, as well as the suspected area where the tick was picked up.

If any of the symptoms of Lyme disease develop, contact a doctor immediately.

The doctor will then decide whether or not to send the tick in for testing. Antibiotics can be used to treat Lyme disease if infection occurred.

Unfortunately, the range of blacklegged ticks is expanding in Ontario.

I have no intention of purchasing zombie bullets, but, as someone who has found a tick engorged on their abdomen, permethrin might be a future purchase on my next cross-border visit.

Check your dogs for ticks, too