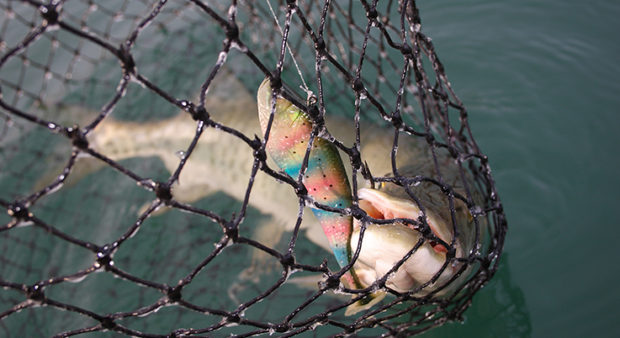 When I started fishing with my dad, seeing another muskie angler was rare. In fact, when other anglers saw our lures, they’d normally ask what on earth we were fishing for – and hide their children. Now, at some boat ramps, waiting in line with other muskie anglers eager to launch is common. This growing fleet is setting trends for catching muskie well into the future. Even if you’re an old-school Dacronline Creek Chub-trolling traditionalist, allocating some attention to these trends will pay off.

Going soft
Soft plastics have been mainstays of bass and walleye anglers for as long as I’ve been fishing, but muskie anglers have been slow to follow suit. That’s changed. Soft-plastic muskie lures have become go-to baits for many anglers. Like plastic bass creatures, the action they’re capable of is unmatched.

Soft plastics are one of the biggest tactical changes, says Marc Thorpe, a muskie guide from the Montreal area who plies the St. Lawrence/Ottawa River systems. “With so much fishing pressure, we’ve moved on to a stage where subtle finesse tactics often work best,” he said. “The fish see plenty of lures and learn to avoid loud, noisy baits by the end of July. Soft plastics ‘push’ water more like a real baitfish, and muskie respond better to them from July through the end of the fall season.”

While these lures are a good option anytime you might normally throw a jerkbait, they’re particularly good in late fall when water temperatures are falling. Their slow metabolism makes muskie sluggish and less than willing to chase jerkbaits, but a slow-dropping, gliding, hopping soft plastic with major action can really work well.

Soft plastics are also starting to find homes on more traditional hard baits. Many jerkbaits and cranks now come with plastic tails that add extra action and colour to hard lures, while still retaining their durability. These tails are especially valuable when the lure pauses and during boat side figure-8s.

Soft plastics do have downsides. While many are less expensive than hard baits, they don’t last as long. Some get ripped up after only a few fish. To start with soft baits, choose one natural tone for clear water and another in a bright colour for stained or stained water.

By the boat More and more muskie are being hooked at boat side. Whether this is due to the fish being pressured more by anglers or because anglers are simply getting better at turning follows into hits is unknown. What’s undeniable is that good boat-side manoeuvres translate into more muskie.

A figure-8 is a way of continuing your retrieve at boat side. By plunging your rod tip into the water when the lure is a foot or two from it and making a big figure 8, you can often provoke following muskie into hitting. When a big one does, things quickly become crazy.

“Some of our members are hooking one-half to two-thirds of their muskie on a figure-8,” said Ian Young, President of Muskies Canada. “Many anglers do a figure-8 even though they don’t see a follow, but the fish are there.”

Practise the figure-8 before a 50-incher is hovering at boat side. Then, you will be able to perform it as your adrenaline spikes once a fish is seen, instead of standing slack-jawed as it drifts away to the shadows of the weedbed it came from.

Try topside
Catching muskie on the surface was once considered a special event. Few anglers consistently used surface lures. That’s changed, too. They’re now my go-to summer muskie lure anytime the water is relatively calm or during low light at the beginning and end of the day.

Surface lures can make fish hit when nothing else seems to. It might be that having dinner on the surface is such a rare event (ducklings and rodents must be a great change of pace from suckers, whitefish, and swimmers’ toes), the fish learn to pounce on the opportunities or lose out.

Throwing topwaters has advantages beyond putting fish in the boat. Watching even a small muskie take a topwater on a calm evening is spectacular. It will make your day. Topwaters are also kind to arms and wrists, as they’re easier to retrieve. In fact, a topwater is often the best lure to start someone off muskie fishing or for young or smaller anglers that have a hard time casting and retrieving bigger lures. They’re also a great choice for night fishing. They rarely snag up.

You don’t need 50 different topwaters to start off. Black is a must-have, so get a tail-spinner-style lure in this shade to start. An oversized cigar-shaped walk the-dog topwater in any shade you like is also worth having. After these two, let your experience and fishing conditions guide your selection.

A meal deal
Really big lures, by muskie-fishing standards anyway, used to be a novelty item, and few anglers actually spent much time using them. With better engineering and stronger rods, reels, and line to fish them with, big lures are being used more frequently.

Muskie can eat incredibly big prey. Wolfing down big meals is an energy-efficient way for them to survive. Using a big lure also helps weed out some smaller fish that aren’t the target. Small muskie and all but the biggest bonus pike tend to leave big lures alone.

Big baits also have another practical factor, says St. Catharines muskie angler Dax Jacklin. “Custom shops are producing 14-inch or longer lures,” he said. “For trolling for big fish in the fall, it seems more appropriate to use a larger lure. They work.”

Most of the largest lures are made for trolling. They’re difficult for even the biggest anglers to cast.

Often, fall is the best time to pull these monoliths, as muskie tend to be around deep drops and open water then. This said, a mammoth muskie will eat a huge meal anytime, so use bigger lures whenever the urge moves you.

There’s never been a better time to be a muskie angler. We have excellent gear, a growing library of fishing knowledge, and the fisheries are, for the most part, in good shape in Ontario. Recent trends are but a few signs of a fishing revolution going on. This season, tap into some of them, and you will boat more muskie, too.

Watch: Demonstrations of the Figure-8