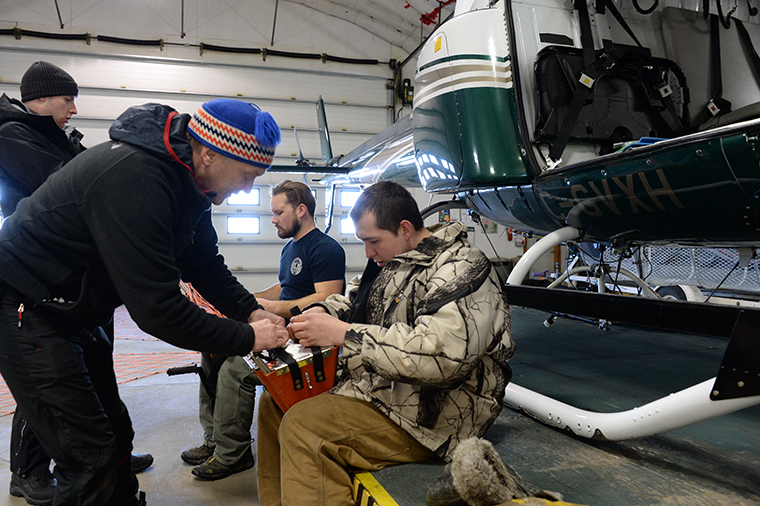 The Ministry of Natural Resources and Forestry (MNRF) has teamed up with the Michipicoten First Nation to try and save more caribou on Lake Superior.

On Feb. 15 and 16 a crew made up of MNRF staff, Michipicoten First Nation members, and independent contractors moved four cows and one bull from the remaining caribou on Michipicoten Island to Caribou Island, approximately 35 kilometres away.

The efforts had to be called off before the targeted number of caribou were relocated, due to weather. But, talks are underway to reconvene to relocate at least two more cows and one bull, when weather permits,.

The MNRF completed a relocation effort in January and successfully moved nine caribou to the Slate Islands, a group of islands approximately 130 kilometres north of Michipicoten Island.

“[Michipicoten First Nation] felt it was important to establish caribou at another location in the area and we agreed that it was a prudent approach,” said Jolanta Kowalski, an MNRF spokesperson.

Leo Lepiano, lands/resource consulting coordinator with Michipicoten First Nation, said his group wanted to form a back-up herd at the same time as the initial move, however at the time, the MNRF didn’t feel the options presented were suitable.

“We didn’t think only moving some caribou to the Slates would be a good conservation policy,” he said. “Our goal is to eventually have animals back on Michipicoten Island.”

The caribou were moved in the same way as the first group — captured via net gun shot from a helicopter, sedated, blindfolded, bundled up, and moved by helicopter.

“We know that a small number of bulls and cows can lead to a healthy population,” said Kowalski.

One of the key factors to this move happening was the approval given by the owners of Caribou Island. Two small parcels are Crown land, but the majority owner is an American conservation foundation. The Michipicoten First Nation secured support from that group.

It’s too early to know what the final expense for this relocation effort will be, but the costs will be shared between the provincial government and the Michipicoten First Nation.

Read more about the relocation of caribou to the Slate Islands here.

Caribou to be relocated by helicopter