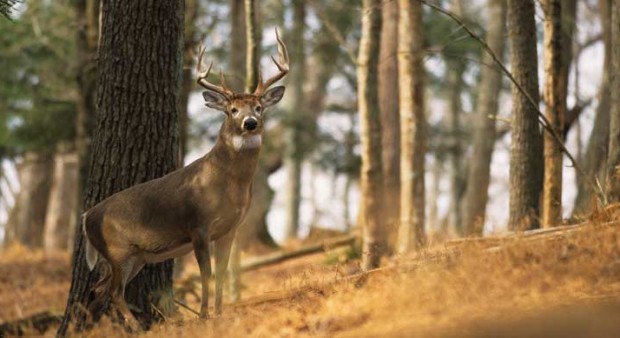 My boots crunch blueberry bushes as I ascend a ridge that I hope will be a whitetail heaven. In the past, this place has provided me with life-altering moments of deer hunting, and the frosty air now carries a scent of pine that hints of those past glories.

The ridge runs north-south for more than a half-mile, and the wind is blowing due west. To the east, a lake forms an ice-skimmed moat that prevents approach. No problem, though. I climb the ridge and cross over quietly, but quickly, to the east side, trying to leave as little scent on bushes and game trails as possible by dodging heavy brush and hopping from rock to rock. Soon, I’m standing on the downwind side, catching my breath and taking in the sounds of the forest.

Once ready, I turn south and start still-hunting. This will be no idle wander. I will arrive at a preplanned destination at just the right time.

A youngish doe crosses my path, unaware I’m there. I’d put an antlerless tag through her ear, but there’s no clear shot. Still, I hope she will draw a buck past me. And, though she doesn’t, I’m still happy to have seen the first deer of the day.

It’s mid-morning when I arrive at my destination. A classic spot, it has ditches running down either side. One is a natural rock gully that’s been there since the last ice age, the other formed by runoff ending at a small beaver dam at the bottom. With a west or east wind, you can sit overlooking this spot, while the terrain funnels deer travelling along the ridge. I’ve seen as many as 10 separate deer move through here in one day of hunting. I take out my folding stool and settle into a natural blind of blowdowns, check my scope’s glass to make sure it’s clear, and then start the waiting game.

While watching a red squirrel forage in pine needles, I ponder why I rarely see other hunters tip-toeing through or setting up stands on ridges. Yes, they often don’t hold obvious deer sign like tracks, droppings, and buck rubs or scrapes. Nor are they as attractive for hunters as the edges of agricultural fields or cutovers. Yet, in most of Ontario, ridges might be the most influential physical factor that dictates deer movement. Understanding how they use ridges to navigate across the landscape is one of the most important lessons an Ontario hunter can learn.

Highway or bedroom
When utilizing a ridge as a resting spot, deer can, by moving from one side to another, find shade in hot weather or sun when it’s cold. They can also position themselves to take advantage of the wind to detect danger or escape bugs. The right location provides a vantage point to see approaching threats or, on a miserable day, shelter from the bite of a bone-chilling wind.

As travel corridors, ridges connect feeding areas. The natural edge of these zones, with their slightly more open terrain, make moving around their range easier for deer.

This last point is important. In cold regions like Ontario, you can liken a deer to being a bit like a rechargeable battery. They recharge from May to November – give or take some energy expenditures for mating and rearing young – and then expend their energy stores staying alive from December to April. Anything that makes it easier for deer to gain fat in summer and early fall, even if just a few calories a day by walking along ridges instead of slogging through lowlands, can mean the difference between life and death the following March. So, by using ridges to save energy, deer can survive to see another spring. That’s reason enough for a hunter to pay attention.

Calling them in
I shake off these thoughts and return to the task at hand. It’s time to start a rattling audio drama, which I hope will fool an unseen buck into range. After clashing the horns and giving a few grunts from my call for added realism, I put the antlers on the ground and stash the call. Rattling and calling has worked for me here before. Now, the waiting game begins again.

One reason I’m hunting this particular spot on the ridge is that it has just the right amount of cover. Here, deer have enough to feel safe, but it’s not so thick that they can’t see. Contrary to popular myth, deer, especially bucks, like to see around them when they move. On this ridge, most of the deer feed in the re-emerging growth in the logging cuts. Then, they move back onto the ridges to travel and bed down during the day. Here, they have a view of their surroundings, without being exposed. It’s perfect.

I see the buck just 50 yards away. Only a few tips of his antlers, an eye, part of a front leg, and an ear are showing as he scans the woods, looking for the deer that made the noises. A couple minutes pass before he walks another 10 feet and shows himself.

He’s a mature buck, but he’s staring right at me and I can’t move. I stay frozen for a moment, before he steps forward just a bit, and his head slips behind a black spruce. I raise the rifle and put the crosshairs on his lungs. He walks five more feet and provides a perfect shot.

No hurry
I have second thoughts. I can see that, while a big deer with a nice 8-point rack, he’s likely only 2 or 3 years old. It’s early November and I still have lots of hunting time left. I let him walk.

I won’t regret this decision, even on the last day of the season when I’m field dressing a spike buck, with the wind howling and my knife hand losing all feeling. I’ve become a bit of a trophy hunter, not for the glory of the kill, but for the joy of the chase. The thought of sitting out the rest of the season, which begins in my area in mid-October, would be unpleasant, at best. Only a truly big deer would make it worth the loss of days afield, so most seasons now see me putting a tag on a smaller buck or doe in December to fill the family freezer. I’m perfectly happy with that.

Later on, just as shooting light has officially ended, I’m off the ridge and back in the cab of my rusty pickup, thoroughly enjoying the tea and cookies stashed away for the trip home. I saw three deer, including one spike buck that almost stepped on me farther south along the ridge. I will give it a few days’ rest and then climb back up to the top and do it all over again. The joy is in the journey, not the destination.

Topping out
Ridges are geologic arteries that pump whitetails past your stand. Often, we scout areas looking for deer sign to tell us where to set up a drive, stand, or plan a still-hunt. But, we have it all backwards. In any hunting area that has anything more than a couple feet of elevation here or there, the high ground often dictates the location of deer sign and thus where you set up. The ridge dictates deer movement, the sign merely confirms it. Look to the ridges. They will tell you where to hunt.

Originally published in the 2012 Fall issue of Ontario OUT OF DOORS magazine.

Q&A: Is it bad to make noise while walking through the woods when deer hunting?

When to rattle, call, and do nothing at all
Tags: Deer, Hunting, Whitetail