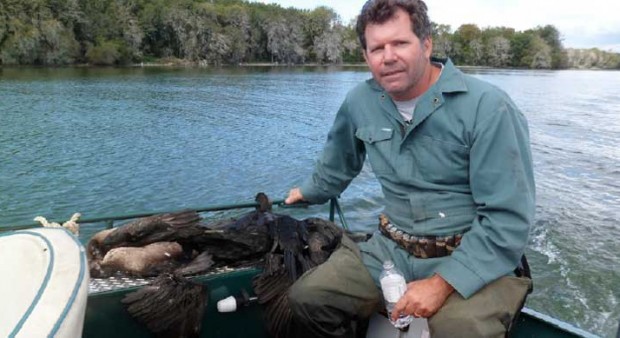 A cormorant cull off Thorah Island on Lake Simcoe is having an effect on the nesting and roosting habits of those fish-eating birds. Larry Wickett, 54, an ecological consultant who lives in Brock Township, said the cull, entering its 4th fall, isn’t having much of an impact on numbers. But, it is deterring cormorants from nesting in the cull zone and is causing migrating birds to move through the area quicker.

Wickett and a group of 4 hunters acting as agents on behalf of the Thorah Island Ratepayer’s Association, conduct culls in spring and during the fall migration after Labour Day. “We cull about 200 birds,” he said. “We retrieve them and look for regurgitated food to determine what they have been eating.” His group has found they eat perch, some bass, gobies, and perch eggs. However, Wickett says the rationale for killing cormorants is not about fish consumption. “Mostly, it is because of the destruction their roosting sites cause along the water’s edge habitat. This is a wetland area, the ribbon of life, and trees are dying there that won’t quickly be replaced; water quality is being affected too by cormorant waste,” he said.

He theorizes cormorants are benefiting from invasive species like zebra mussels, which promote clearer water that gives these sight feeders an edge. He believes more cormorant young are surviving so their numbers are expanding unnaturally fast. The cull, he says, created a situation where there were zero nesters this spring, which allowed the shoreline and water to recover.

“They don’t want to nest where they are being disturbed,” he said. Last fall, the group estimated 20,000 of these migratory birds passed through the cull area from Georgian Bay. “We’re having success locally, but this problem won’t be solved until it becomes part of the bigger picture in Ontario,” Wickett said. Wickett offers consultant services to ratepayers associations.