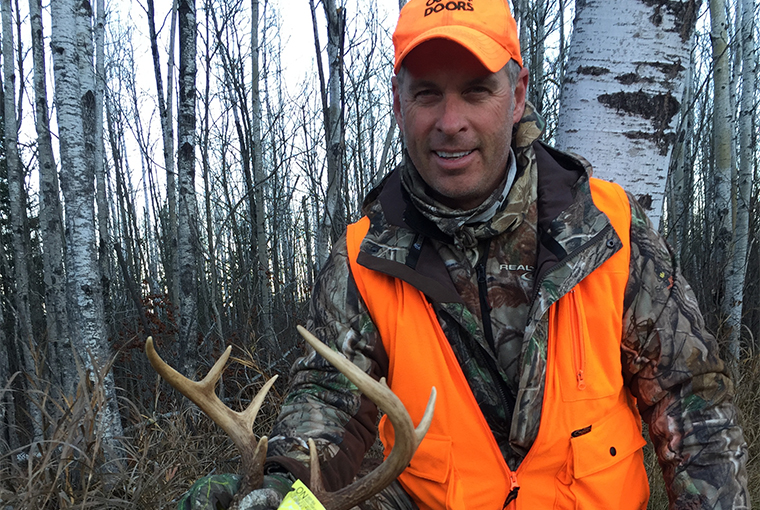 It was ten minutes before shooting time and I could not find the tree stand. My eyes strained to see the horizontal lines of a stand, but all I could see was trees. My hunting partner, Tom Armstrong, who hung this stand, had pointed it out to me from his truck. But it all looked much different from within the field.

After some walking around, and with better light, I finally spotted the stand. It was only about ten feet up and with just minutes till first light, I got myself in place. 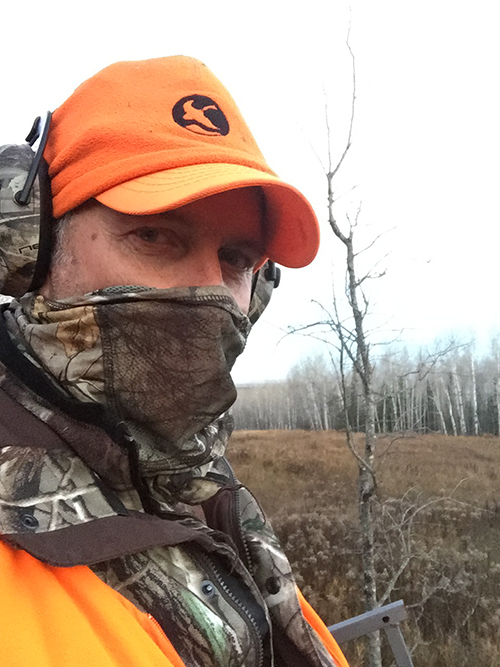 Tom called this spot the “buck stand” for good reason. He had taken many bucks from this position and several other set-ups within about 300 yards of the field. The field was tucked perfectly between two stands of poplar and aspen. The field itself was alfalfa gone fallow and the grass was waist high.

From the stand it was about 80 to 90 yards to the opposite of the field. The far end to my right was about 150 yards away. The morning was cool and still. The sky was clear. It felt right.

When a little time had passed I dug out a doe bleat can call. When tilted down and back up, the can made a sound not unlike that of a lamb.

Whaaaaa. The sound carried over the field and through the trees. I tilted it twice more and put it to the side. My eyes slowly scanned the field. I’d watched some of Tom’s videos from this stand. The bucks tended to criss-cross through this field searching for does. I’d also been sent a trail cam pic of a monster buck in this field the night before. It probably wasn’t far away.

Ten minutes passed and all was quiet. I reached for the bleat can and tilted it three more times, sending the pleading cry of a doe in carnal distress through the trees. I’d also brought a rattle bag and decided to create a little more drama with some light rattling. Nothing better than boys fighting over a girl to bring another dude to the party.

I rolled the rattle bag through my hands, creating a sound that approximated two bucks fighting. As I continued rattling my eye caught the unmistakable face and throat patch of a deer. It was standing head on in an opening on the opposite side of the field.

I stopped dead, and stared at the deer. It was a buck with the curl of its golden antlers visible. It had locked onto my position, but I didn’t move a muscle. I could feel the adrenalin in my system and took some slow, deep breaths to calm myself. 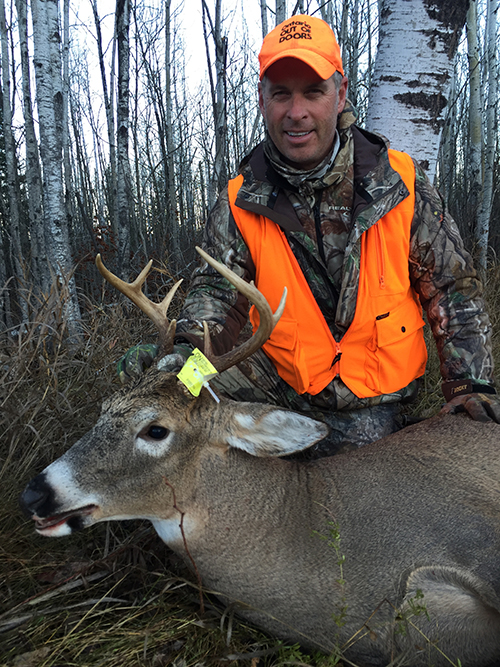 After a minute, the buck dropped its head and I took advantage of that moment and put the rattle bag down. Slowly, I picked up my gun. The buck was now moving into the field, looking for the doe, its nose trying to locate her scent. The wind was in my face so the buck would not smell me.

It was not the monster I’d seen on the trail cam. Through my scope I could see it was a young buck with eight points. Yet it was feeling like my deer. It was now working its way through the field, on its way to the opposite side. My gun was shouldered, safety off.

The buck stopped and I had a clear view of its shoulder at 60 yards. The trigger was squeezed, the buck kicked and ran back through the field and into the trees. Moments later I heard some loud crashing, then silence. The buck was down.

Twenty minutes later, Tom and I stood together over the deer.

“I love it when a buck hunt comes together,” I said. “It often doesn’t.”

Thanks to the buck stand and some good fortune, this one worked.

Get more of Gord’s hunting and fishing stories here.

Three bucks that bested me

The sheer unpredictability of hunting