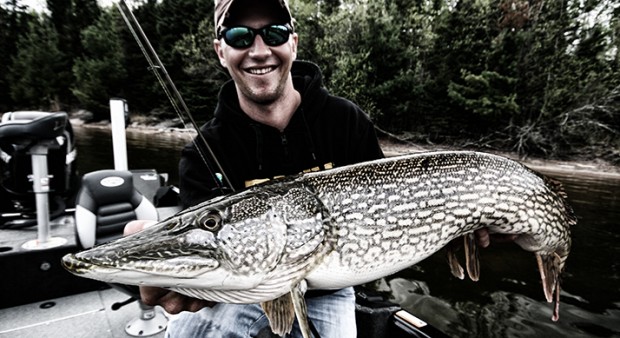 Most pike anglers dream of catching a monster that’s somewhere north of 20 pounds. Why? All pike are cool — even the 4-inchers have a certain “wow” factor. Maybe it comes down to what a big pike represents. Monsters of any species, but especially big pike, are rare. Each one is a minor miracle, having survived the many natural threats that obliterated their kin.

Predation, cannibalism, natural catastrophes, disease, shore lunch, and simple bad luck conspire to end even a genetically gifted pike’s life years before it reaches the highest rung on the hierarchy. Few make it past their first year, let alone grow to gigantic proportions. But, some do survive to reach weights of 20 pounds and more. When you catch one, you’ve reached a top rung as well.

Since being on the right lake is the most important factor in catching a 20-pound pike, let’s look at some waters that give you a decent shot at a monster.

Lake of the woods
The western edge of northwestern Ontario has plenty of lakes for hunting down monster pike, but it’s hard to beat Lake of the Woods. The lake is well serviced, so you’ll have no problem finding ramps, rentals, and accommodations catering to anglers. According to OOD contributor Jeff Gustafson,“It would be hard to pick a spot on this lake that won’t get you near pretty good trophy-pike water.”

Kenora guide and 20-year veteran, Dave Bennett echoes that. “Lake of the Woods is a good pike lake and anglers have a shot at catching a 20-pound-plus fish. Early spring is a good time to come. The fishing can be exceptional when the pike are up in the reeds. Casting spoons and soft-plastic jerkbaits, as well as spinnerbaits and buzzbaits are good choices.”

In the fall, Bennett suggests a structure change. “The next time to fish is in mid-October when the water cools and the pike move into the shallows where the muskies were a few weeks before. You can roll up on what you think should be a good muskie spot and it’s now full of big pike. In the fall, upsizing baits and using smaller muskie lures works well.”

Lake of the Woods is a monster lake. It covers 1,074,000 acres that stretches over much of the land mass south of Kenora and dips into Manitoba and Minnesota. It has countless bays, islands, creekmouths, shoals, and weedlines to explore.

The 2 main service centres on Lake of the Woods are Kenora at the north end of the lake and Sioux Narrows half way down the eastern side. Both communities cater to visiting anglers, and the area has plenty of fishing lodges.

Lake Superior’s bays and rivermouths
This lake is possibly the best place in Ontario to catch not just a 20-pounder, but maybe even a 30-pound monster. It’s big water with gigantic pike.

“The Bays of Lake Superior all have the habitat and ecosystem requirements to grow big pike,” said Peter Addison fisheries population specialist with the Ministry of Natural Resources (MNR). “The majority of pike habitat is found in shallower, warmer more productive bays. In Lake Superior, the best pike habitat is found in Black Bay, in Thunder Bay and within Nipigon Bay,” he suggested.

Andy Treble, a friend and fisheries biologist, has spent considerable time exploring the shores of Lake Superior and says the tributaries are worth a look. “The mouths of many of the larger rivers are braided with islands, shoals, and channels with significant wood and weed structure. The first couple of kilometres up from the lake are usually good pike habitat.”

He also has words of caution, though. “Superior gets rough. You can easily get stranded or swamped. Watch the weather.”

The standard pike-fishing arsenal works for these Superior pike. Hard- and soft-plastic jerkbaits, spoons, spinners, and flies all deliver results. Fish these baits at the mouths of inlets, shallower bays, and anywhere you find weeds or warmer water temperatures that attract monsters from the mostly frigid depths of the main body of water.

In the prime pike bays of northern Lake Superior, the city of Thunder Bay and the Town of Nipigon offer lodging, food, and boat launches.

Thunder Bay angler Sandro Fragale says that anglers looking to launch in Black Bay, “should put their boat in at Hurkett at the top end of the bay, or there is Portage Bay Road Launch, which is what most local anglers call it, located in the middle of the bay. There is also a launch at Sibley on Lake Superior, which is a short boat ride to the bottom end of Black Bay,” said Fragale.

Wherever you choose to stay, the pike fishing on the north shore of Lake Superior can be (pardon the pun) superior and gives you a great shot at a pike over 20 pounds.

Lake Nipigon
Lake Nipigon dwarfs just about all other waterbodies within the province, save the Great Lakes.

“The majority of pike habitat in Lake Nipigon is found in the shallower and warmer bays, such as South Bay, Chief Bay, Ombabika Bay, and McIntyre Bay,” said the MNR’s Peter Addison. “There is a good public launch at South Bay, but McIntyre Bay has no public boat launches.”

Fellow OOD writer and Senior Editor Gord Ellis says Lake Nipigon should be considered the sixth Great Lake and is a good bet to break 20. “You really need to be ready for big water that can turn nasty quickly, but the rewards can be huge. Find weeds and you find pike on Nipigon. When you find them, fish bucktails, white soft-plastic jerkbaits, and traditional pike spoons.”

Keep in mind that Nipigon’s big pike have no problem living in cold-water environments. While brook trout fishing with Ellis and his father a few years ago, we saw and hooked some really nice pike while targeting brook trout. There were not legions of them, but they were nice fish. This happened after the sun came out and slightly warmed the shallows. Bottom line on Nipigon is that even small patches of pike habitat can hold a monster.

Fishing is good all season, but the best action is in the spring after ice-out. This lake takes some effort on the part of the angler, as much of it is wilderness and not highly populated with lodges, resorts, or manicured launches. However, if adventure, wilderness, big water and bigger pike are your taste, Nipigon is your flavour.

Lake Muskoka
For anglers in the southern areas of the province, Lake Muskoka is a bit of a sleeper option.

“Lake Muskoka is a good choice for anglers looking for bigger pike,” said Parry Sound district MNR Fisheries Biologist Steve Scholten. “It’s a big lake with good access and it has a history of producing them.”

Opening week is the best time, especially when you have a cooler spring, says Huntsville’s Gary Martins, (www.hookitfishingadventures.com) a local guide who has been fishing the lake for 20 years. The key is to find sand in shallow water. “Big pike will be on sand during sunny days. On cloudy days, they’ll be close to these areas, on points and other structure near the sand.” 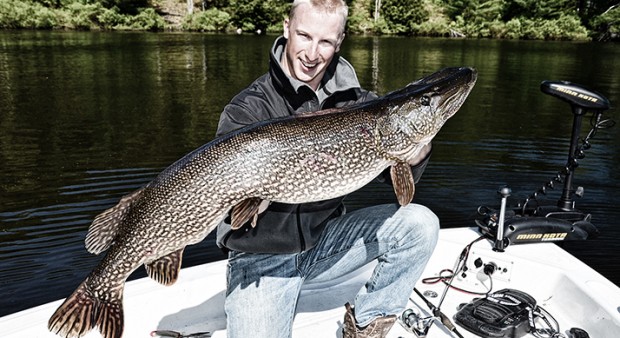 Michael Bertelsen, who has been guiding for 30 years out of Huntsville and runs Captain Action Charters, suggests mixing it up for Muskoka’s bigger pike. “Because pike are getting fished heavily on Lake Muskoka in the past few years, use lures that are a little outside the envelope from what other anglers are throwing. Try experimenting with lures that the fish haven’t likely seen.”

Avid pike angler Craig Stuckless from Bracebridge suggests that anglers consider water depth. “Most anglers overlook really shallow water in the spring, like a foot and a half or even a foot deep. But in the spring, big pike might be in these extreme shallows.”

Garrett Green, (www.muskoka-guidedfishing.ca) a guide from Bracebridge who has been fishing Lake Muskoka for 25 years, suggests flexibility is the key to catching big pike on Muskoka. “Anglers on this lake have to be adaptable. The fish are in shallow bays at the start of the season but after a couple days they might be out on rocky, windblown shorelines near the spawning bays. By being flexible, you’ll catch pike on Lake Muskoka.”

Lake Muskoka anglers can resupply after a day’s fishing at nearby Bracebridge, Huntsville, or Port Carling.

Lake Nipissing
Known more for walleye or muskie, Nipissing is a big lake that has the capacity to break the 20-pound pike barrier. It’s also accessible to many anglers in central and southern Ontario.

Carl D’Amour a fishing guide and retired Conservation Officer from North Bay thinks Nipissing is a good bet for bigger pike. “On Nipissing few anglers target them, yet every year I see pike over 20 pounds.”

Big pike fishing really gets going when west winds push the warmer water and shiners into the bays and points.

Shawn Degagne from Callander runs Bear Creek Cottages and says that on Nipissing the big pike fishing really gets going when west winds push the warmer water and shiners into the bays and points. “Shiners move into the bays with feeder creeks, and the pike are right behind them.”

Degagne also suggests fall is a good time to fish the lake for big pike. “In August and September, casting bigger bucktails to weedlines works for bigger pike. Later on, as water cools, trolling big lures works as well. When we are trolling for muskie in the fall, we often catch pike from 36 to 45 inches on the shoals and points,” he added.

Lake Nipissing’s surrounding communities include North Bay at the northeast corner of the lake, Callander to the southeast, and West Nipissing to the northwest. Travelling anglers are well serviced, with plenty of lodges, cabins, resorts, bait shops, and ramps.

Georgian Bay’s eastern shore
Georgian Bay is a vast area. And, while some of the shoreline has been gobbled up by cottage development, there are still plenty of wild places that hold monster pike. The eastern shore is within easy driving distance of many anglers in the province, but even for those further away, it’s worth the drive.

Robert Moroziuk from Waverley  is the southern director  of the Top 50 Pike tournament series and agrees that the eastern shore of Georgian Bay is one of the best big pike destinations in the province.

“The first couple of weeks of the season are excellent on Georgian Bay. The big fish are shallow and often you are able to sight fish for them,” said Moroziuk.

“I look for what I call ‘blue-water fish’,” he added. “These are farther out from the bays and rivermouths, near deeper water. The larger outer islands and channels are the ideal habitat for big pike to ambush prey on deep cabbage beds and then return to the shallows to recover.”

To catch these big Georgian Bay fish, Moroziuk suggests jerkbaits and spinnerbaits, and notes that soft plastics are excellent cast-back lures for pike that follow but turn away.