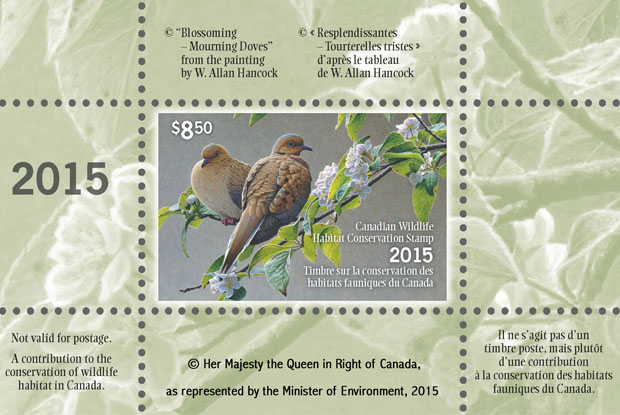 “Blossoming – Mourning Doves,” was unveiled as the image of the 2015 stamp, also available as a print.

The revenues and royalties from the sale of the stamp and print fund WHC’s habitat conservation grant program. Since 1985, more than $50 million has been invested to support over 1,500 conservation projects across Canada.

According to WHC, the stamp is purchased primarily by waterfowl hunters to validate their migratory game bird hunting permits, which contributes directly to “on-the-ground” habitat conservation and stewardship efforts.

Stamp collectors, print purchasers and individuals interested in contributing to conservation of wildlife habitat in Canada often purchase the stamp.

Each year Wildlife Habitat Canada hosts an art competition where a painting, created by a Canadian wildlife artist, is selected to produce the stamp and other philatelic products. The 2015 Stamp is the 31st to appear in the series and is set to officially launch April 11, 2015.

Wildlife Habitat Canada is a national non-profit conservation organization dedicated to working with landowners, governments, non-government organizations and industry to conserve, restore and enhance the great variety of wildlife habitat across Canada.