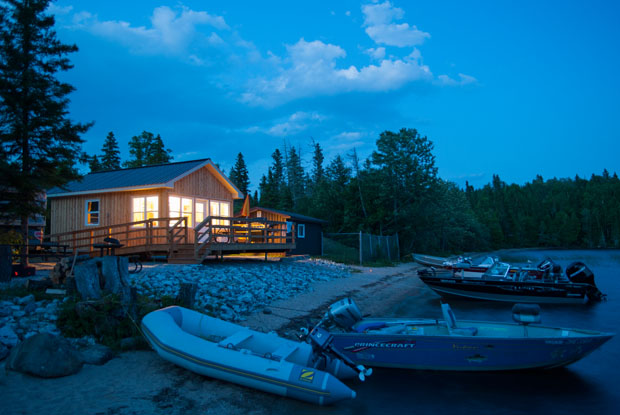 The 20-foot flat erupts into an elongated boulder pile topping out at around 14 feet. My wife, Francine, and I brace for action as we drag live bait rigs tipped with night crawlers.

We’re following Jamie Robinson and his wife, Carol Anne. They’ve already plucked a couple of fat 19-inch walleye from this intriguing piece of structure, and just as our rigs start to bounce up the shoal, Francine and I both connect with yet another Fushimi walleye.

Getting there
Approximately 30 kilometres west of Hearst, along Highway 11, head north up a gravel road for 13 kilometres to Fushimi Lake Provincial Park.
.

Walleye seem to be everywhere they should be, and the easy fishing deeply massages our angling egos. In fact, I can’t think of anything about Fushimi Lake Provincial Park that doesn’t make us feel good.

High hopes
Compared with parks like Algonquin or Lake Superior, Fushimi Lake Provincial Park maintains a pretty low profile. However, as an angler with my ear to the ground, everything I’d heard about Fushimi pointed to an attractive fishing destination.

When I talked to Ontario Parks about doing a photo shoot featuring sport fishing at a northern park, our focus quickly narrowed on Fushimi.

My curiosity about Fushimi stems from a walleye tournament I used to fish on a series of adjoining lakes, east of Fushimi, along the same water system. In spite of high fishing pressure, heavy boat traffic, and an abundance of seasonal cottages, the walleye fishing on what is known as the Hearst Chain of Lakes was surprisingly good.

Jamie and Carol Anne Robinson had fished that same tournament, and it wasn’t hard to persuade the couple, along with their children Lindsay, 15, and Brett, 13, to join us. 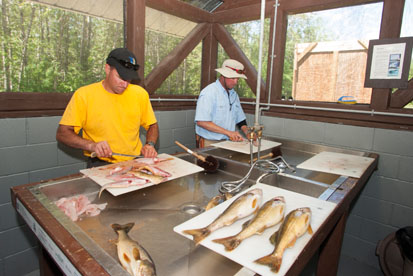 Mostly wilderness
In contrast to the Hearst Chain, there’s little development or boat traffic on Fushimi. The five-kilometre long, three-kilometre wide wilderness lake at the end of a 13-kilometre gravel road, is fairly remote.

In fact, north of Fushimi is mostly road-less wilderness stretching hundreds of kilometres to Hudson Bay. But unlike other remote lakes with exceptional fishing, Fushimi has a launch ramp, fish-cleaning station, flush toilet/shower comfort station and more than 50 campsites.

Although it would be a shame to visit Fushimi and not sample the fishing, there’s more to do than angle. Long sand beaches distributed around the lake sink into cool waters, there’s a seven kilometre hiking trail up to one of Ontario’s last fire lookout towers, as well as rentals of bikes, paddleboats, canoes, kayaks, and 14-foot aluminium boats.

It was built in partnership with the Hearst campus of Sudbury’s College Boreal. Wilson explained that Fushimi was one of a number of northern parks earmarked for closure back in 2012. This prompted a two-year pilot project designed to decrease costs and increase revenue and visitation.

The changes implemented for Fushimi included offering more seasonal campsites and the frame cabin rental. The 16- x 20-foot cabin with 10-foot front deck sleeps five and is available for $125 per night.

Wilson says it was rented 48 times over a two-month period last summer and the overall success of the pilot project means Fushimi is no longer slated for closure.

Welcome to the neighbourhood
Certainly the staff at Fushimi goes out of their way to make us feel welcome, but it’s the friendliness of fellow campers that really helps to make Fushimi a special place. Virtually everyone seems genuinely happy to be here.

Most of the seasonal campers are from the predominantly French-speaking town of Hearst and there is an openness amongst park users that makes us feel like part of one big family. When I have an issue with my camper, I don’t hesitate to ask my neighbour, Real Hebert, for assistance. Not only does he lend me the tools I need, he comes over to our campsite to lend a hand.

Word also travels that we are here taking pictures of fish and fishing. As a result, we get everything from fishing advice to anglers showing us their catch, and even campers bringing their children over to model for the photo shoot.

Beware of the hatch
After a few days on the water, we’ve explored most of the main lake and poked into a few of the many elongated shallow, weedy bays. It’s early July, and although the mayfly hatch would normally be over, it’s been an unusually cool summer and it’s in full swing.

Our last full day on the water is hot and calm, and the lake is alive with hatching mayflies. Walleye gorge on mayfly nymphs, and although the hatch is a notoriously bad time to fish walleye, we are catching some of the largest of the trip.

After Jamie Robinson releases the third in a trio of 25-plus-inch walleye caught under the hot afternoon sun, he wonders aloud, “Can you imagine what the fishing is like when the mayflies are done?”

In addition to catching walleye, pike, and perch we’ve watched loons, bald eagles, and moose. We have cruised past sloping granite shorelines, splashed through the shallows of deserted sand beaches and breathed the cedar-charged air of interior campsites and hiking trails — and developed a keen sense of why our fellow campers seem so happy here.

This article was originally published in March 2015 in the print edition of Ontario OUT of DOORS.

Scratching the surface of Temagami walleye