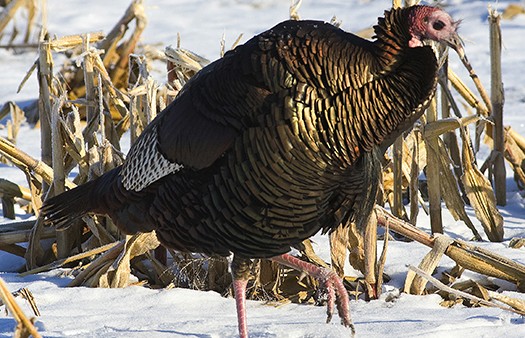 “Last year the total spring hunter harvest was 8,274; this year it was 6,912, even though licence sales were similar,” he said.

Hubert says the reduced harvest could have been caused by several factors including the hard winter and mortality, a late spring that made it hard to locate birds early in the season, or a lack of hunter reporting.

“All indications, thus far, are that the population is stable,” he said. “It could have been a combination of all these things. A variation of 500 wouldn’t be surprising after a winter like this, but this is a substantial decline in harvest. We’ll have a better indication with the next set of deer hunter surveys.”

One indicator that turkey numbers might be down is that the jake harvest was lower than in past years.

“This could mean that winter was tough on young birds or that last spring’s breeding season was not as productive,” he says. “We’re not sure yet.”

Hubert also says that there have been reports of avian pox and lymphoproliferative disease virus, also known as LPDV, in some turkeys in the province. The disease has also been detected in New York State and Maine too.

“We don’t know how these diseases are affecting turkey numbers,” he says. “But we’d like to hear reports of any incidents of this.”

He says anyone who sees birds with elephant man-like lesions on their faces should contact the Canadian Cooperative Wildlife Health Centre at 866-673-4781 to report them.