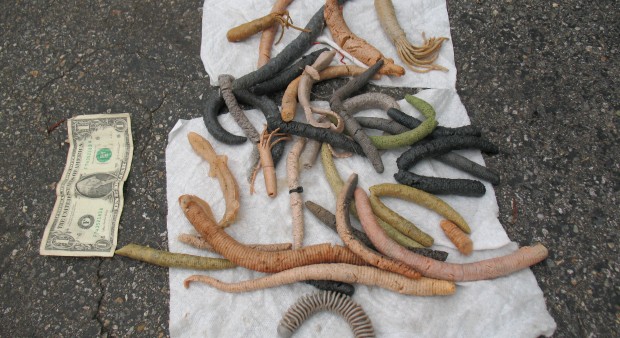 Reprinted from the February 2011 edition of Ontario OUT of DOORS.

Open the tackle box of just about any Ontario angler and you will see a soft-plastic lure of some kind. Twisters, grubs, worms, and jerkshads catch just about every species of fish in the province. In fact, these baits continue to grow in popularity right across North America.

Soft-plastic lures do catch everything, but are most often used for taking bass and walleye, the target species of the manufacturers who sell Senkos, tubes, lizards, and rubber worms.

Many of these baits are scent impregnated or have flavours that appeal to fish. If you use plastic baits, you probably know how long fish will hang on to them. At times, they simply won’t let go.

Safety concerns
Yet, a new study out of Maine states the inability of some fish to reject plastic can potentially kill them. The study casts doubt about just how safe soft-plastic lures are for certain fish, whether actually caught on the lure or not. What’s more unusual is the focus of the study is brook trout, a species not commonly associated with these baits.

The study was a joint project of Unity College in Maine and the state’s fish and wildlife division. Thirty-eight brook trout were fed a commercial trout diet mixed with a free-choice assortment of soft-plastic lures over a 90-day period. Fish growth was recorded and compared with a control group.

Dr. Russ Danner, an inland fisheries pathologist, was one of the researchers. “The study came about due to reports we had from ice fisherman that they were catching brook trout and lake trout with up to a dozen plastic worms in their bellies,” said Danner. “In Maine, many of our fisheries have both bass and trout, and plastic worms are a popular bass bait.”

During the study, researchers found an amazing 63 per cent of brook trout voluntarily consumed soft-plastic lures that were simply dropped into the water. Plastic lures were also eaten off the bottom of the tank. Another 12 per cent of the brookies swallowed more than 10 per cent of their body mass in plastic.

The study revealed that the lures are retained inside fish for 13 weeks and, with brook trout, the plastic could stay in their stomachs for the rest of their lives.

Gluttons
It also revealed how greedy brook trout are when feeding. One nine-incher ate a plastic lizard nearly as long as it was. “I couldn’t believe the trout ate that huge thing,” said Dr. Danner. ”You would never fish for a brook trout with a lure that big. Needless to say, the fish lost a lot of weight, since it couldn’t swallow anything else.”

Not much is known about the toxicity of plastic when held in the stomach of a fish for that length of time. Only one trout that had ingested a plastic bait died during the study, although nearly all lost weight and suffered declining health. It’s been found that soft lures lodged in the digestive tract can lead to ulcerated tissue and an inability to eat.

In Ontario, waters where bass and brook trout exist together are relatively rare. Yet, as the smallmouth bass expands its range in the province, this interaction will become more common. The situation is different for lake trout.

Popular choice
A staggering number of Ontario laker waters now have populations of bass, and soft-plastic baits are a popular choice for catching both species. Some notable examples of this include Lake Simcoe and Lake of the Woods.

One of the photos an angler supplied to Maine researchers was of the stomach contents of a lake trout. The fish was crammed with a wide variety of plastic baits, all of them more or less intact.

There are no estimates for Canada, but in the U.S., it’s believed roughly 20-million pounds of soft-plastic lures are lost annually in lakes, rivers, and streams. Plastic doesn’t degrade well, so theoretically, those lost lures could last in a lake for more than 200 years.

No panic
Dr. Danner is not in favour of regulating plastic baits, but he says anglers should consider other types of biodegradable lures that will break down. He also says anglers should not discard plastic lure bodies into the water, but properly dispose of them.

I’m not quite ready to get rid of my plastic lures. The study results and the photos from Maine are interesting and alarming, but I believe it’s too early to make wide-scale assumptions about what plastic baits are doing in all other fisheries across North America.

This being said, I’ve caught enough fish with plastic baits in their stomach or hanging out the rectum to know that on some level this situation is happening in Ontario. Having a fish pull a plastic bait off a hook isn’t uncommon while angling. A dab of super glue on the hook or jig can usually solve this problem.

More serious than this, I believe, are the number of plastic baits anglers discard into the water. This is done mostly out of carelessness, but as the Maine study shows, the possibility of injury to fish is real. The study shows that brook trout will eat a soft-plastic worm almost as readily as the real thing.

Let’s all do our best this year to properly discard soft baits and lures. Put a coffee can or small garbage bag in your boat and toss ripped-up lure bodies into it. When it comes to our precious trout resources, starvation due to angler laziness is simply not acceptable.