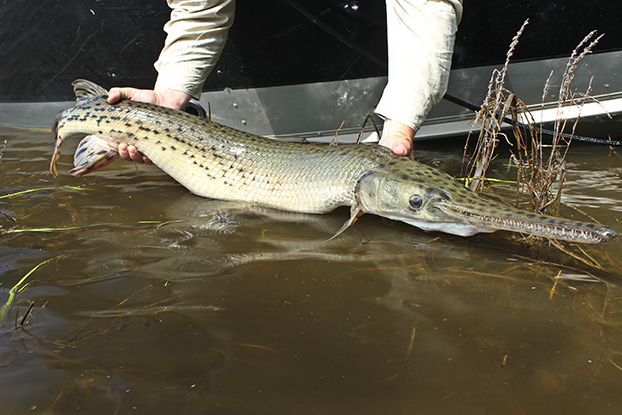 As we worked across the choppy waters of the Ottawa River toward the flooded bay, my thoughts drifted back to my first, and at that time only, longnose gar catch. I was a youngster fishing the Bay of Quinte. It both scared and fascinated me.

That was decades ago. On this warm June day, with my friend, guide, and current Ontario longnose gar record holder, Rob Jackson at the helm, I was ready to learn from the best.

Record holder
Rob Jackson of Prospect, Ontario, holds both the current and previous Ontario records for Longnose Gar. His first fish on the podium was a 51.5 x 16 inch fish, weighing 15.79 pounds which he caught in 2009. He then surpassed his own achievement in the spring of 2012 with a specimen measuring 54 x 18.5 inches and weighing 20.10 pounds. Could he have toppled the record again in 2013? “I released one last spring that measured 53 x 21 inches and weighed 22.7 pounds on the digital scale. Just an incredible fish that looked like it ate a cormorant! Fattest and heaviest fish ever for me.” He elected to let that one swim free. For those keeping track, all three heavyweights came from the Ottawa River.

It didn’t take long for the first hook-up. Ten minutes in, I had just finished tying on my bait when Jackson shouted, “Better grab the net!” Before I had the chance, I watched in amazement as his rod sliced backward in a formidable hook-set. When the water settled, a robust 51-inch long fish posed for photos with my host. Thirty minutes later, I proudly hoisted a 50-inch gar of my own.

Living fossils
Longnose gar are easily recognizable. They are slender and cylindrical in shape, with a thin jaw elongated into a beak. Contained in this beak are several rows of exceptionally sharp, strong and conical teeth. Diamond-shaped scales cover the body, forming hard plates made of an enamel-like substance called ganoin.

Gar possess gills yet they can also expel air from an air bladder that’s connected to the pharynx, enabling them to take in a fresh supply from the surface.

Gar are often referred to as living fossils, since nearly all of their relatives are extinct. Once abundant in Europe, their distribution now lies exclusively in North America. Their appearance is also rather prehistoric.

For Ontario anglers looking for action, your best bets are the Great Lakes and their tributaries, the Ottawa River, St. Lawrence River, Lake Simcoe, Georgian Bay, and Lake Nipissing.

A Matter of sight
Casting blindly is a low-percentage tactic for connecting with gar. Actively seeking fish and casting only to those spotted will increase your catch rate dramatically. My day on the water with Jackson illustrates this point well. Being a dyed-in-the-wool bass guy, my instinct is to make as many casts as possible. This doesn’t work for longnose gar.

Targeting gar is akin to hunting. A great deal of time is spent working the shallows slowly with your trolling motor, stalking your prey, while strategically scanning the water with polarized glasses. Once your target is found, all attention and effort is made to elicit a strike. In the case of my 50-inch gar, the fish turned but missed on the second cast. The sixth cast finally found teeth and flesh. What Jackson said after I released that fish still resonates with me. “Never give up on a fish if you don’t get a strike right away. Pursue them. Entice that attack.”

“Never give up on a fish if you don’t get a strike right away. Pursue them. Entice that attack.”

Fish will position themselves higher in the water column under sunny conditions. This makes them easier to spot. When clouds periodically roll in during our outing, fish sink out of sight and hook-ups become hard to find. An elevated casting deck and bow-mount trolling motor are a necessity when targeting gar. Jackson outfitted his stock deck with a removable plywood platform, similar in configuration to a saltwater flats rig, which greatly increases his ability to spot fish and cast accurately to them.

Longnose gar can be caught on a variety of lures, but Jackson’s favourites — and most productive — are crankbaits. “Due to where the fish are sitting while basking, shallow-running baits rule. Jerkbaits, like Rapala X-raps; stickbaits, like a Rapala Floating Minnow, Storm Thundersticks, and LiveTarget Smelts will do the trick. I’m partial to wakebaits. The Jackall Cherry 0 Footer 56… Mann’s 1 Minus is standard as well.”

Bright hues
Bright hues are conducive to gar fishing. They allow you to keep a visual on your bait while in the water. Matching the hatch can also increase hook-ups. At the onset of our outing, we found a good-sized gar with a bright yellow pumpkinseed sideways in its mouth. Yellow was a key colour of crank for us that day. Whatever style of crankbait you choose, upgrade your hooks. They need to be high quality and ultra sharp.

While taking a break from the action, I ask Jackson about other methods of catching gar “I have used rope. It does work and is surprisingly easy to get out of the gar’s mouth once landed. It’s a decent option when the weeds are very thick and the fish are in tight. Rope is more of a finesse way to catch them. I experimented with swimbaits last year. They also produced. I personally prefer hardbaits because of the reaction they get from the fish. Strikes are violent. It definitely gets the heart pounding!”

Casting criteria
Accuracy in your cast is key to getting bit. Although overhand casts can find their mark, underhand pitches will give you pinpoint precision with less chance of spooking fish. If you are a largemouth angler who pitches jigs, this technique will come easy.

Where your lure lands is the most important part of the puzzle. Once you spot a gar, pitch a bait out just past the fish and six to 12 inches to the side. Reel the bait back parallel to the fish. Longnose gar are opportunistic feeders. They’ll strike out at anything that comes close to their jaws. Generally, they lash out to the side. When you cast past the fish and bring your bait back along its body, the gar will sense prey approaching and swipe at it. This tactic applies whether or not fish are on the move or stationary.

Gar spook but will not flee the area entirely. If a fish begins to move, follow it closely with the trolling motor while casting repeatedly to it. These fish can still be caught.

Safe handling
Longnose gar pack a punch. This was evident while hoisting my 50-inch fish up for a photograph. A quick and powerful swing of its tail caught me under the brim of my cap, drawing blood. I was thankful its chompers didn’t make contact.

“Gar can be nasty once in the boat. Those teeth are relentless and will cut anything they come into contact with,” said Jackson. “I prefer to use a large muskie net for two reasons: my safety as well as the fish’s. Grabbing them by the beak to lift them in the boat is not only dangerous but can injure larger fish. Once in the net, a good set of long-nosed pliers comes in handy,” explains Jackson.

Since they can breathe out of water, time is on your side for removing hooks. Jackson uses a rubber mat for this task, and to keep the boat carpet clean, as gar are prone to defecating while being handled.

A rare breed
Making our way back to the launch at the end of a successful day, Jackson tells me about guiding a father and son the week before, and the friendly competition that ensued in the boat. He has a genuine excitement when introducing folk to this magnificent fish.

I ask why gar are so special to him. He sums it up nicely “I chase gar as they are probably the most challenging fish to catch in our area. Pure sight fishing with good conditions are needed or it’s a wasted day. Rod skills and a little luck get them in the net. Plus they make for awesome photos. I love the reaction people have upon seeing one of my gar pics. Most say they are never swimming in the water again.”

As we bid farewell he jokingly asks, “Still scared of gar?” “A little,” I reply with a laugh. “But I’m hooked now.”

This article previously appeared in the Ontario OUT of DOORS magazine.