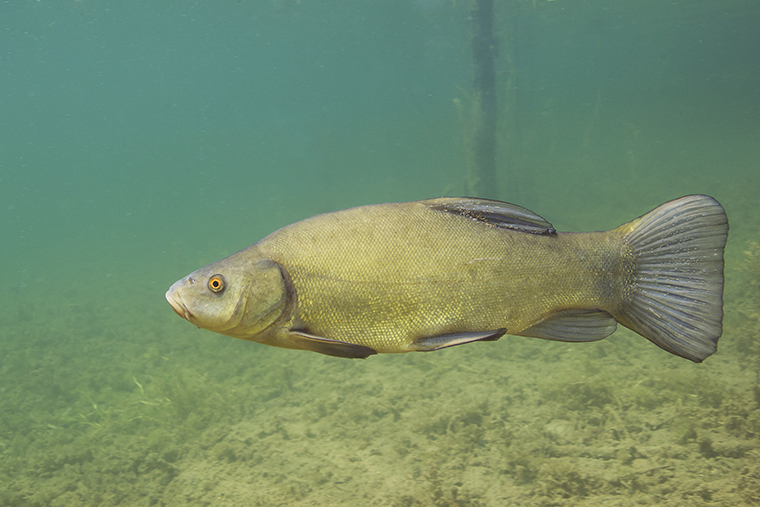 Catches of tench (Tinca tinca), a European and western Asian minnow that grows beyond 10 inches and acts similarly to carp, are becoming more common in the St. Lawrence River near Montreal. This begs the question, will they soon establish in the Great Lakes?

When asked, Invading Species Awareness Program (ISAP) Coordinator Sophie Monfette said, “The ISAP is concerned these fish will establish themselves and then expand their populations into the Great Lakes. This is why we continue to work with partners and members of the public to report any sightings or captures of invasive species, including tench…”

Monfette says predicting when an invasive species will arrive is always difficult because there are so many variables to consider.

Should they arrive, the outlook is not good.

“Tench will out-compete native fish species for space and resources,” she said. “They will also uproot large masses of aquatic vegetation. This may cause changes in habitat for native species and negatively affect water quality. The fine sediments from the uprooting of vegetation may also suffocate eggs and newly hatched fish of native species. Tench are also known to carry parasites, which can be very harmful to other species.”

She also noted tench are a prolific fish. Females reach maturity at two to three years of age and can produce between 8,000 and 20,000 eggs in a single batch, provided conditions are favourable for reproduction. She says they also spawn in batches from spring to fall.

Like carp, they prefer slower-moving water in lakes and streams and are typically found in shallower, warmer waters, especially in areas with dense vegetation.

Tench were brought into a Quebec fish farm illegally in 1986 and soon escaped to the Richelieu River, which is a tributary of the St. Lawrence. They were also introduced in the U.S. in the 19th century.

“Much like most invasive species, once they have been given the chance to establish, eradicating them is difficult,” said Monfette.

She says ISAP’s plan to monitor them includes asking the public to report encounters to the Invading Species Hotline (1-800-563-7711) as well as the Early Detection and Distribution Mapping System at www.eddmaps.org/ontario, so that ISAP can ensure the information gets passed along to the proper authorities.

Click here for details on the end of Lake Erie Angler Diary program.