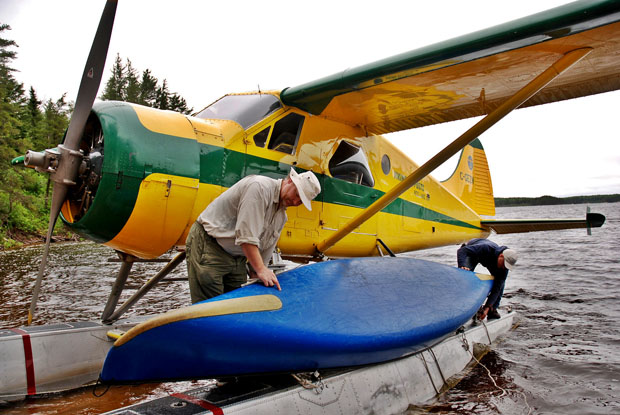 Hurry up and wait.

That’s how it always seems when you’re about to take a bush plane on a northern canoe trip. We were waiting for the weather to lift before our group could be flown into Woodland Caribou Provincial Park. The forecast called for torrential rains, hail, and even the possibility of a rogue tornado. So the pilot asked us to relax but stay close to the hanger just in case things changed for the better.

Two days later, we finally lifted off from Red Lake and our trip of a lifetime began.

Minutes into the flight, I started searching the thick boreal forest below, peering out the scratched Plexiglas window of the turbo Beaver, hoping to spot the elusive animal that gives the park its name. I knew I had little chance of spotting a woodland caribou amongst the endless bogs and black spruce. But looking down upon the landscape was a little easier on the stomach than glancing ahead at the dark, menacing clouds the pilot still had to fly through to get us to our starting point on Artery Lake.

Boreal like no other
What I saw below bewitched me. It was an ecological masterpiece, a rich tapestry of old-growth conifer forest, interspersed with a scattering of birch and poplar, and elongated bands of exposed bedrock in the labyrinth of lakes, creeks, and rivers.

What to expect
THE TRIP
A 10-day fly-in canoe trip across Woodland Caribou Provincial Park.
GETTING THERE
Red Lake is 170 km north of Vermillion Bay along Hwy. 105. Fly-in from Red Lake to Artery Lake, with pickup or vehicle shuttle by outfitter to take-out point at Leano Lake.
COST
Group of four with two canoes and fly-in on Beaver floatplane is $390 per person. Shuttle/pickup at Leano Lake is $50.

Our 10 days in Woodland Caribou had us travelling across the park. Along the way, we paddled past the best Native pictographs I’ve ever seen, portaged through fantasia-like black spruce forests, slept under star-lit skies, and cooked up fish fillets for almost every meal.

The landscape here is prairie-boreal — a much hotter and drier environment than most of the boreal forests stretched across the top of the province. Even the fish population is different. The park has the typical walleye and pike lakes — with ‘eyes averaging three pounds and plenty of paddle-length pike — but it also has a wealth of lake trout waters. In fact, each day of paddling brings such a mixture of angling possibilities it’s truly an angler’s paradise.

By day five, we’d reached my favourite area in the park: a series of turquoise-blue lakes on the southwest corner. Here the hills were higher, the water was clearer, and the forest thicker. It was unlike the regular tannin-coloured lakes where we caught countless walleye and pike. This was trout water and the 20-inch average fish yielded tasty fillets that we battered and fried up for breakfast, lunch, and dinner.

We were running out of time by day six, so we altered our planned route to the shuttle at Leano Lake. That’s the beauty of canoe tripping in Woodland Caribou; it’s easy to change your route. Even if a portage isn’t marked on the map, it’s usually possible to bushwhack over to another series of lakes and rivers.

Elusive
An extra bonus, beyond the fishing, is the possibility of spotting a caribou. Woodland caribou are unlike the more commonly known barren land caribou. Forget the image in the classic movie Never Cry Wolf where actor Charles Martin Smith runs naked through a massive herd of caribou across the irregular tundra.

Woodland caribou are forest dwellers, living in small bands, scattered across a massive chunk of boreal forest ranging from the Yukon to Newfoundland. They’re nicknamed “grey ghosts” for good reason — it’s more than a rarity to spot them. In fact, they are provincially and federally designated as threatened.

One of the largest herds roams Woodland Caribou Provincial Park, but in this 1.2-million-acre wilderness, only 200 to 300 caribou wander the forest. Still, it’s one of the best places to search for one.

One of the largest herds roams Woodland Caribou Provincial Park, but in this 1.2-million-acre wilderness, only 200 to 300 caribou wander the forest. Still, it’s one of the best places to search for one.

Our group managed to see seven moose, four black bear, 20 bald eagles, and a pack of wolves, but no caribou. It was exasperating at first. Snapping a photo of a woodland caribou has been on my bucket list for years. By mid-trip, however, it was simply enough to travel an area where they live. It seems the caribou’s habitat is becoming just as rare as the species themselves.

Driven by fire
The entire protected area of Woodland Caribou has been burned over, on average, every 100 years. I’ve never paddled in an area where the patchworks of various-aged burns are so apparent on a day-to-day, even hour-by-hour basis. One minute we were portaging through an open forest with old-growth jack pine rooted amongst a thick carpet of moss, and the next we were drifting by a shoreline with blackened stumps intermixed with young pine shoots trying to crowd each other out.

Woodland Caribou is a dreamscape for canoeists. I’ve paddled in many places but had never felt such a keen interest in a region before. Maybe because it was new to me; maybe because it wasn’t at all what I anticipated; maybe because I just got a taste of this wild area during our mere ten-day trip there; whatever the reason, I’m going back. Not because I didn’t see a caribou and still desire to see one, but because I’m curious to discover more reasons why the park bewitched me in the first place.

This article, written by Kevin Callan, originally appeared in the August 2015 edition of Ontario OUT of DOORS. For more stories like this subscribe today.

A trio of trout