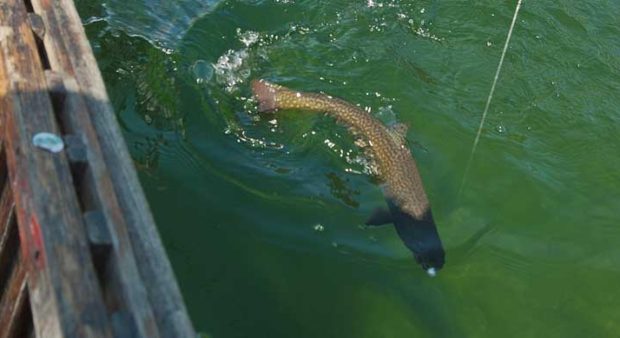 For the average trout angler, summer can be a time of frustration. Trout are a cold-water creature, and as the water warms, fish become stressed and tougher to catch. This is especially true when it comes to brook trout, which need it cold. Even introduced species, such as brown and rainbow trout — known for a higher tolerance of warm temperatures — will generally have to find some cold water sanctuary to survive the hot blasts of summer.

If you are a small-water trout angler, and you want to find them during the dog days, I’ve some thoughts on how to do it, focusing on trout in streams, rivers, and smaller inland lakes. Summer trout fishing on the Great Lakes is an entirely different ball of wax.

Find the springs
When water temperatures rise in the summer, trout begin looking for areas that are cooler. In lakes, the fish will generally go a little deeper, to or below the thermocline, an invisible line separating the upper warm layer of water from the cool, deeper water below. Trout in lakes will spend much of the summer near the band of cool stuff, but will make the occasional foray into warmer, shallower water to feed.

In streams and rivers, the situation is more complicated. There’s no thermocline in a river, so brook trout, and to a lesser extent browns and bows, have to find upwelling water or springs. When the water gets warm, brook trout will stick to a spring hole as if their life depends on it. In rivers, I’ve seen schools of 10 to 60 brook trout clustered around a spring, unwilling to leave, even when approached. Springs are also key to the reproductive success of brook trout. The species needs upwelling water to spawn successfully. In fact, the Latin name of the brook trout — Salvelinus fontinalis — translates to “dweller of the spring.” All cold-water fish will gravitate to springs, including browns, bows, and even pike.

Locating springs is a trick, and not always an easy one. They can be in the most random places, although there are things to look for. Sometimes, the base of a high hill or mountain will have upwelling water. Creek mouths and lake outlets often have upwellings associated with them. Sometimes, it’s as simple as finding where a spring-fed creek enters a river or lake.

It doesn’t have to be a big creek either. Brook trout, in particular, will pick up on the smallest trickle of spring water. I remember casting to the mouth of a tiny creek on the Albany River and watching in wonder as a school of brook trout, from 3 to 5 pounds, followed my spinner back to the canoe. These trout were all crammed into an upwelling area the size of a garbage can lid.

As kids, we found springs by wet-wading in creek and rivers. You could sometimes feel the cool water on your ankles as you waded along the stream edge. In lakes, the spring locating process is trickier. I’ve found that large weedy areas are often associated with springs in trout lakes. The good news is there are often open areas where the upwelling water doesn’t allow for weed growth. The bad news is when you hook a trout in one of these weed-lined spring holes they invariably swim straight into the cabbage.

One angler I know was belly boating (fishing from a float tube) in a stocked brook trout lake one summer when he felt an area of ice-cold water on his bare legs. He backed off the spot, and began casting a fly to it. The spring hole was in the weeds and the opening was about 6 feet around. Several brook trout were caught that day, including one in the 8 pound range. Find a spring in a lake or river, and you should have a summer hot spot for many seasons to come.

Falls, pools and rapids
In rivers and creeks, deep or moving water provides trout some refuge from the heat. Deep pools, especially those with undercut banks or toppled trees provide brown trout both the cover and protection they need. Browns are the most heat resistant of the trout species in Ontario. They can also range from small to quite large in relatively small waters. Some of the creeks that flow through limestone rock are rich in nutrients and therefore have ample food, so the fish can grow large. The question is where does a 27-inch fish hide in a creek you can step across? They are usually found deep in the gnarliest tangles and at the back of undercut banks. The shade of a culvert or bridge is another favourite place for browns, although brookies and rainbows also gravitate to this man-made cover.

Falls and rapids are always worth a try in the summer, as they provide a greater amount of oxygenated water. They are also consistent summer trout producers. The larger the falls, the better the odds of there being fish associated with them. Some falls and rapids are located on natural faults, and this means there may be spring water involved. Only the trout really know for sure why they like them.

Rapids and plunge pools are also places of safety for trout in the summer, and because the food rushes by them, it allows an economy of movement for stressed fish. Look for summer trout behind large boulders, or in the bellies of a pool, where the current is slower.

Morning, evening, and night
Finally, it really does pay to get up early or fish a bit later in the summer. Low light and cooler air temperatures make just about all species of trout more active. Hatches of insects also tend to be more intense at these times.

If you are a brave sort, night fishing can really pay off in July and August. Needless to say, night fishing is not for everyone, but big brown trout and rainbows are quite susceptible to angling after dark. I’ve never done well night fishing for brookies, but others have told me otherwise. If you decide to do a night shift, make sure you have some bug juice and a flashlight with extra batteries. It can be a jungle out there.

Summer doesn’t have to be a dead zone for trout. Despite the heat, they still have to eat.