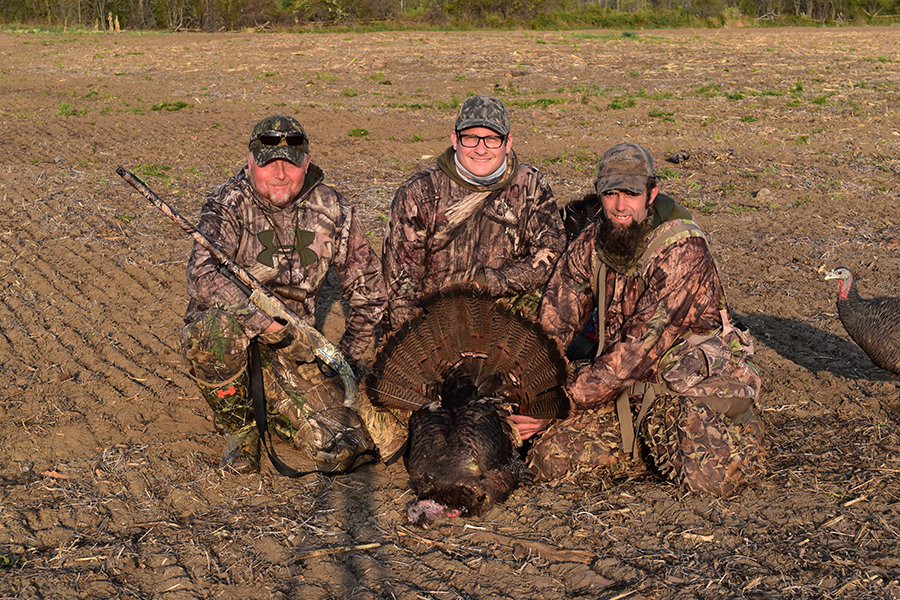 Full Day: $250 for one hunter and one guide, or $360 for two hunters and one guide. Sunrise until 7:00 p.m. Barbecue lunch and field dressing of bird included. 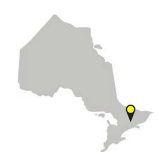 The best words to describe the gobbling I heard that morning would be rolling thunder. Each time Bobby Clark struck the call, the response was echoing gobbles that could be heard across the 20-acre field. Out of the corner of my eye, I caught some slight movement.

“Birds coming to your left, hold still,” whispered Ron Ferguson, owner of Irish Creek Outfitters and my guide for the day.

Ferguson has been hunting and fishing his way around the Ottawa Valley for over 30 years and has been a professional turkey guide for seven. He boasts a high success rate and a big part of that is having an in-depth knowledge of the 5,000 acres of prime hunting ground owned by his family and their neighbours.

In the summer, Ferguson heads up to Renfrew where he offers guided muskie and walleye trips on the Ottawa River.

When winter rolls around he’s at his ice huts on the river, or down at the hunt camp doing some predator control.

This was my first guided turkey hunt, so I wasn’t sure what to expect. At around 4:30 a.m. I arrived at the old farmhouse where we had arranged to meet. As I pulled up, I could hear classic rock coming from the barn. I walked over and to my surprise was greeted, not by Ferguson, but by a llama and a donkey. I spent a moment or two grooving to the Rolling Stones with them before I noticed headlights coming down the driveway.

Ferguson hopped out of the truck with his cousin Bobby, who would be doing the calling for the day. After introducing ourselves Ferguson said, “Throw your gear in the truck, and let’s get going!”

A short drive down a dirt road and we pulled into a field the cousins had scouted the night before. They quickly set up a ground blind along a brush line at the top of the field, and we were ready to go. It wasn’t quite legal shooting time yet, so we chatted quietly about hunting, fishing, and cooking.

The glow of the rising sun illuminated the landscape and Bobby began calling, using soft tree yelps with his diaphragm call in tandem with a classic box call. The gobbles of an estimated 20 to 30 jakes and toms shattered the early morning silence. Out of the corner of my eye I saw movement, which turned out to be two young does trotting along the soy field.

The same rumble of gobbles followed each of Bobby’s subsequent calls. Ferguson and I couldn’t help but laugh a little with excitement as we glassed the field for any sign of birds.

About 45 minutes in, Ferguson tapped me on the shoulder and silently pointed at a fence line to our left. Slowly I rotated my head and saw a gang of four jakes aggressively strutting towards our decoys. The big white-headed one flared up and started marching towards the tom decoy. Just a few metres out, the gang realized something was up.

One last strike on the box call and my white-headed jake stuck his head up. The plume of smoke from the 3½- inch turkey load blocked my vision for a second, but when it cleared I saw my jake on the ground, and heard Ferguson say, “Awesome job, man. Awesome job.”

With my tag filled, we hopped into the truck and headed down yet another gravel road to the hunt camp. While Bobby made short work of cleaning and bagging my bird, Ferguson fired up the barbecue and got some steaks going for his famous steak sandwiches. I grabbed an energy drink from a cooler full of beverages and headed into the cabin to admire the trophy buck mounts and huge turkey fantails with dangling beards that lined the walls.

As I was reflecting on our successful morning hunt, Ferguson presented me with a perfectly cooked steak, sautéed onions, and peppers sandwiched in a toasted bun. Boy, did it hit the spot. With a full belly and a bag of fresh wild turkey meat, I thanked my hosts and headed home with an ear-to-ear smile and a new addiction to turkey hunting.

Get an inside look at Andrew’s hunting adventure:

This article was originally in the May 2017 issue of Ontario OUT of DOORS magazine.