Seeking out migratory steelhead through ice 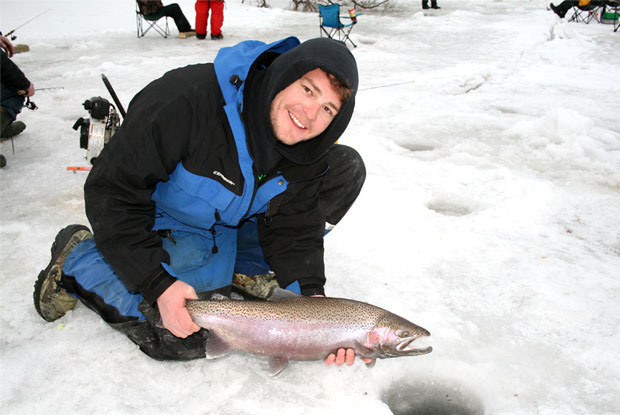 Steelheaders are continually searching for new techniques to increase their success rate.

In March of last year, I learned the intricacies of catching migratory steelhead through the ice and was impressed with a new strategy. Pulling into the parking lot near an eastern Lake Ontario river, I could see 30 to 40 anglers float fishing near the end of the pier.

The frozen section of the river adjacent to the open water only had a half dozen hard-water steelheaders set up. Kevin Phillips, who works as a full-time fishing guide, motioned me to join him over his holes. Working my way down the riverbank, I noticed two five-pound steelhead on the ice beside a couple of the anglers.

Using short rods
Phillips, who operates Chasin’ Tails Charters, explained his game plan. “I use short ice-fishing rods – 26 to 28 inches in length – that have a medium to light action. The light tip indicates the movement of the bait and the heavy butt-end assists in putting pressure on a hooked fish,” he said.

The light tip indicates the movement of the bait and the heavy butt-end assists in putting pressure on a hooked fish.

An angler nearby hooked a steelhead and I had a front-row seat to the action. The rainbow fish made a number of short runs before the lucky angler slid it up the hole and onto the ice. After a quick photo, the buck rainbow was released to continue its spawning run.

A couple of other anglers lost fish and then Phillips hooked a steelhead and passed the rod to me. Every time I pumped the rod to gain line, the silver used the current to maintain its distance from the hole. Finally with help from Phillips, we slid the six-pound hen onto the ice and then released it.

Two-rod set-up
“Most anglers use roe bags in nickel to quarter size. Split shot can be used to keep the bag within a foot of bottom. Floaters can also be used in a roe bag with a small sliding egg sinker holding the offering in a stationery position,” Phillips said. Some steelheaders hold the rod in their hands and others employ a rod holder when using a two-rod set up. The use of two rods is legal while ice fishing in Ontario, except in a limited number of waters. Always check the regulations for the zone in which you are fishing.

Another technique through the ice is to use a small wobbling plug such as a Flatfish or Kwikfish. Firet Tiger and skunk are popular colours. A sliding egg sinker at the bottom, about 10 feet downstream, and an 18-inch lead allows the lure to wobble in a stationary position. Aggressive steelhead will attack this lure with little hesitation. Tube jigs and small spoons can also be effective when used in a jigging presentation. Glow colours in orange and chartreuse are popular.

Steelhead spawn in the spring and depending on weather and melt water, they usually show up off river mouths in late February. Fish will enter the river as current flow increases. Although some rainbows stay in the open water of the harbour, other eager fish will move up under the ice into shallow pools. The ice provides cover and a sense of security. Steelhead feel comfortable in troughs or depressions that may be less than two feet in depth. Fish will make forays back and forth from pocket water under the ice to areas of open water. You can cut holes in the ice to determine deeper holding areas. 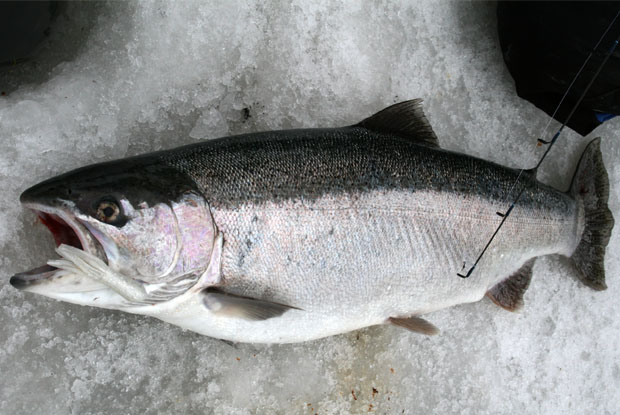 Safety is a priority
Safety on the ice should be a priority when fishing on frozen rivers. Check with local authorities for ice and river conditions before venturing off shore, stay away of areas with current, fishTry to stay in a groups, wear a floater suit, and fish where ice thickness is at least eight to 12 inches. Avoid periods of heavy melt and runoff since this will erode ice.

In Ontario there are a number of rivers that have a year-round season in areas near the mouth. Lake Ontario tributaries offer some of the best opportunities. Try ice fishing for winter steelhead for an enjoyable change of pace.