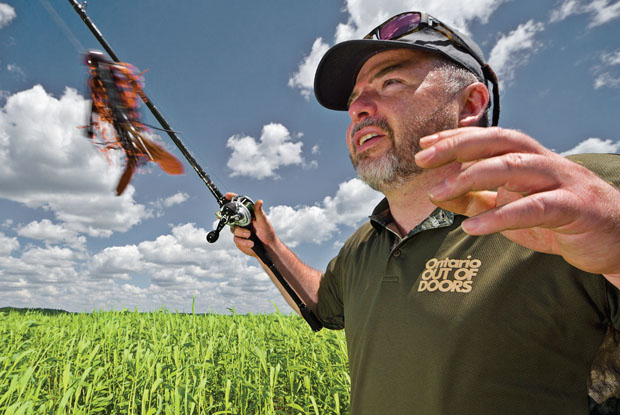 QUESTION:
I have a question for the fish experts at OOD. What’s the advantage of using a baitcaster over a spinning reel? I don’t want to have to take out a second mortgage to get a high-end baitcaster, but I’ve yet to find one that will cast as well as the average-priced spinning reel. And I notice that OOD writers often use baitcasters.
Sincerely Clueless
Lost Lake

ANSWER:
Like so much of fishing, my observations are certainly open for debate, but here are my pros (and cons) on spinning vs baitcaster.

Spinning pros
• Since the advent of no-stretch (braided or fused) lines, which are thinner than traditional monofilament, you can get away with a spinning reel in more situations.
• Spinning reels take less skill to operate. Anyone can pick one up, and in a few minutes be casting like a pro. With baitcasters, even the pros occasionally have to pick out a bird’s nest.
• In my experience, spinning outfits are more sensitive. The weight of the spinning reel hangs below the rod, which is where gravity naturally wants it to be. On a levelwind, the reel sits on top of the rod, but gravity is always fighting to turn it over. Keeping the reel up requires your hand, wrist, and forearm to work (albeit just a little bit), but this detracts from the sensitivity of the outfit and the ability of the angler to detect bites or contact with structure and cover.

Baitcasting pros
• Heavy monofilament and fluorocarbon lines work better on baitcasting tackle. Due to their rigidity, these lines have a tendency to coil off the spinning spool and develop line twist.
• When line is being pulled off a spinning reel, it can twist, but this doesn’t happen with a baitcasting reel.
• Drags on level wind reels tend to be much smoother and last longer. A baitcaster is also better designed for winching in hard-pulling lures that produce more torque.
• A baitcaster will likely outlast a spinning reel of comparable quality.
• With monofilament or fluorocarbon line, you are limited to smaller pound tests on a spinning reel, otherwise the stiffness of the line causes it to jump off the spool. Also, over time, the line takes on a coil shape, increasing resistance and reducing casting distance. This isn’t as much of an issue on a baitcaster.
• Bass anglers use baitcasters for their accuracy. When trying to hit a small target, you actually cast beyond the target, and by applying pressure to the line, you slow down, or hold the lure back, so it drops precisely into position. The fact that your thumb rests on the spool of the baitcaster makes for a very precise and controlled braking to ease your lure into a small target area. Line feathered off a spinning reel tends to jump off in small increments, as it hits your finger at one small point as each coil comes off the spool. This is in part why baitcasting reels tend to be more accurate.

Bottom line
If you plan to fish heavy test lines and pull fish out of heavy cover, you should invest in a baitcaster. It will be well worth your time to learn how to use it. If, however, you want a reel to fish light-to-moderate test lines, the spinning reel will do the job for less money and require far less practice. I strongly recommend you use no-stretch lines if you plan to spool up a spinning reel with anything over 10-pound test.

Q&A is a regular feature in the print and digital editions of Ontario OUT of DOORS. Click here to subscribe.