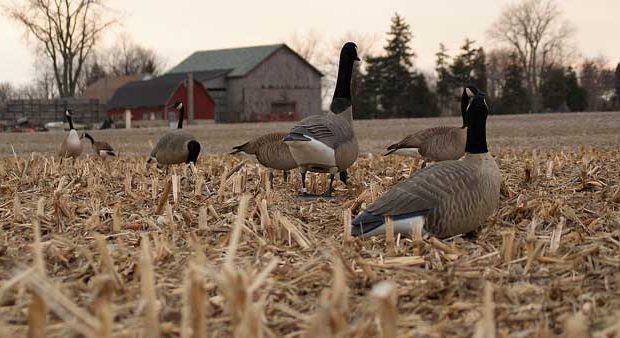 There’s never been a better time to be a waterfowler. We reap the benefits of the robo duck and layout-blind revolutions, as well as a surge in duck numbers. But, most of all, we enjoy a huge increase in Canada geese. If there’s one reason to become a waterfowler right now, I’d argue it’s this. Canada geese are abundant province-wide, can be hunted with reasonable ease, and offer exciting opportunities that old-time waterfowlers only dreamed about.

One of the nice things about geese is that they can be hunted in fields. With farmers, golf-course proprietors, and landowners lamenting over the property damage and mess they’re making, gaining permission to hunt them has never been easier. Let’s get started.

Scouting
Scouting is the most important element of goose hunting. In most scenarios, you can gauge the quality of the hunt before it even happens. Canada geese are cagey, but predictable, meaning they will return to a field morning and night until the food runs out or they’re forced to move due to hunting pressure.

You’ve probably heard that you should always be on the exact spot where geese will land. That’s true, but some hunts go awry when hunters mistake where that spot is.
Here’s an example. A hunter drives by a field and sees a few hundred birds on the west side of it. Since he has permission, he sets up the next day right where he saw those geese, only to watch them land in the east end of the field.

What went wrong? They didn’t take into account that those geese, having been in the field for an hour or more, had fed their way over from the east side of the field, where they’d initially landed.

The first step to scouting is finding the geese, but you should always double check and preferably watch the birds land in the field. For a number of reasons, unless the window to hunt a field is slamming shut, always spend a little time in your vehicle watching the birds come into it.

First, you want to see exactly where they land. If you’re unable to see this, then go into the field and look for feathers and droppings. Set up on the pile of feathers.

Secondly, you want to know the size of the groups filling up the field. Just because a field is loaded doesn’t mean that it will be my chosen location.

If 200 birds pile into one field in two big waves, looking for another field that has fewer birds approaching in smaller groups might be best. Seeing them enter the field helps gauge how many opportunities there might be to harvest birds and also lets you judge how many decoys should be put out.

Ideally, pick the field that offers the most shooting opportunities, but also take into consideration how many geese you will be educating. Keep in mind that the more sets of eyes coming at you, the greater the risk of something going wrong. All it takes is one bird seeing something it doesn’t like to ruin an opportunity.

If you’re new to goose hunting, fooling smaller groups is always going to be easier. And, if you only have a few dozen decoys, less can be more.

Lastly, you need to know the direction most of the birds are coming from. This could play a large role in how or if you hunt that field. Keeping in mind that geese land into the wind, I can’t overstress the importance of not letting shot pellets rain on houses, roads, or farm yards, so take the expected wind direction into consideration before you jump into a field. It might mean waiting a day or two to let the wind change or setting up the spread so you’re taking crossing birds. Either way, it’s only fair to landowners and their neighbours that you eliminate the chance of dropping errant shot on them.

The bottom line is that scouting pays off. It’s even more crucial for novice hunters who lack calling prowess or the number of decoys to be successful in a heavy-traffic field. Time spent looking for birds will reap rewards. 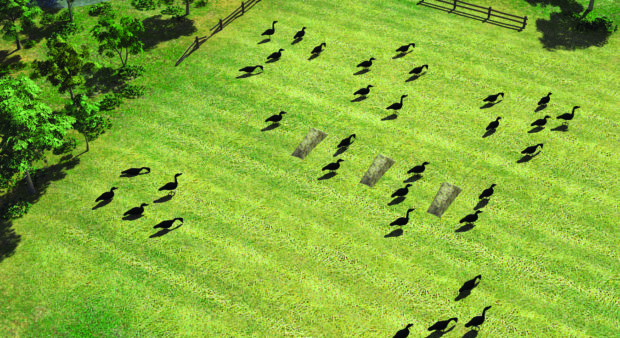 My philosophy about goose hunting is, “It’s a marathon, not a sprint.” If you’re serious about hunting Canada geese, you’re going to be hunting many of the same birds throughout the season. In early season, try to get by with as few decoys (usually some of your poorer decoys) and as little calling and flagging as possible. If you’ve done your homework and have permission for a field geese are using, it’s going to be a great hunt for uneducated birds.

Here, the biggest concern with spread size is whether you can sufficiently hide the blinds in the field. A dozen dekes might be enough to bag an early season limit for a solo hunter, but if you’re trying to hide five blinds in a cut wheat field, then you should probably bump that number up to three or four dozen. Also rely more on shells and silhouettes to fill in the spread later in the season, saving your full-bodies until the hunting gets tougher.

At the start of the season, you will often find smaller groups of geese flying around. This is great for two reasons. They usually come right in and, thus, there are fewer educated survivors. Groups of 8 to 20 birds are about the norm.

When you watch them in the field during the weeks leading up to opening day, you will note there seem to be little bunches all over it. These are family groups.

Note how there are small groups around the blinds. Also, always leave a nice open space that the birds can easily work into. Leaving that landing zone will allow for much better gunning than if the birds are trying to get in from a flank. If birds are flanking you, make a quick adjustment, either by moving a few decoys around or cocking the blinds a little bit to the appropriate side. 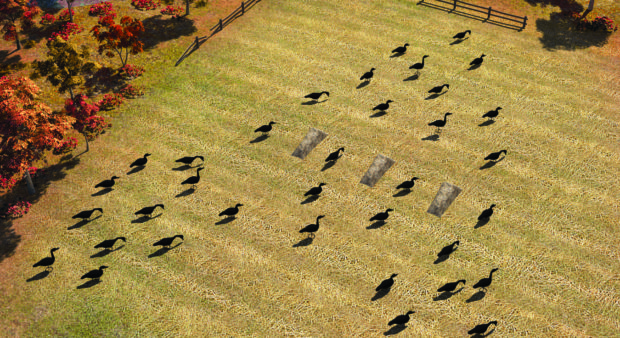 Ramping Up
As the season progresses and hunting pressure mounts, start using more decoys. Three to four dozen full-bodies, with another couple dozen shells and silhouettes, become standard for me. Expect smarter birds, in larger groups.

One of the spreads I use is the “tear drop.” As birds stack up in a field, they will often form a sort of line. This spread gives the illusion that the birds at the tail end have been there feeding for some time, while also creating an open pocket to accommodate larger groups. You might find that more flagging and calling are needed and any real-motion decoys (flappers, kites, etc.) might prove beneficial.

A lot of attention is paid to various set-ups in waterfowling. The famous “J” and “U” patterns in duck hunting quickly come to mind. There’s no sure-fire set-up that works every time, but the spread often recommended in goose hunting is the “X.” The idea behind this is that if the wind changes, all you have to do is turn your blinds appropriately and the geese will be coming into your face again. I, however, don’t like this spread. 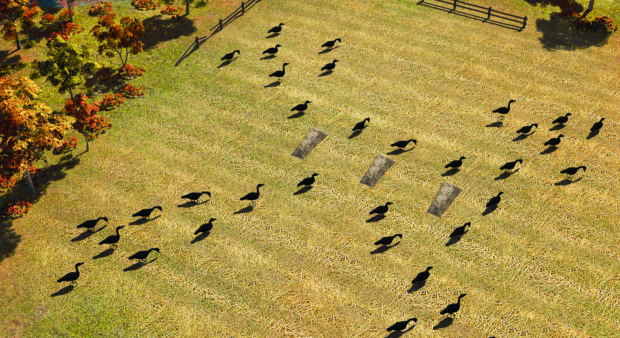 Look at the diagram and you will see four pockets for the geese to land in. Ideally, they will land in the one in front of you, but if the wind is shifting minute by minute, you might have just created another potential landing zone to your flank. This can create difficult, possibly unsafe, shooting, if there are a few hunters shooting over one another. Geese will inevitably flank you from time to time, but don’t help them do it.

To combat the problem, try a pattern I call “the wall.” It allows for big groups of geese to easily enter the landing zone and also battles a shifting wind. If the wind shifts more than 90 degrees, you’re obviously going to have to do some rearranging, but this set-up helps keep the birds out in front of the gunners. Note how the downwind side of the spread has been softened and more decoys have been added to the far side. If the birds are coming in more from the side at any particular moment, the added numbers should help draw the birds into the landing zone, instead of stopping short.

Don’t be afraid to make adjustments. Do the extra work to keep the birds in front of all the gunners and you will soon be singing “Oh, Canadas.”

Getting Started in Goose Hunting

The three Bs of waterfowling