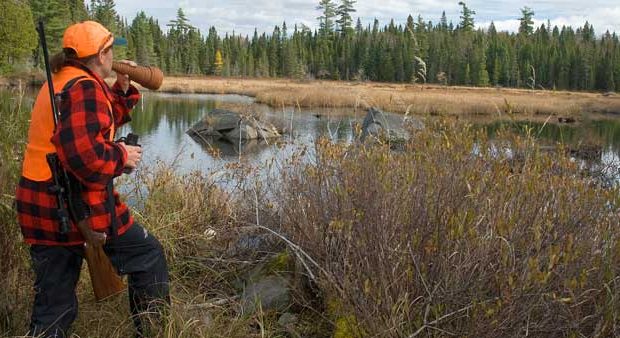 The most exciting and effective method of attracting moose to within shooting distance is by calling during the rut. There are two main approaches. The first uses passive tactics, with the caller pretending to be a cow moose by simulating calls and other actions of a cow in heat, to get a bull moose to respond.

The second approach uses aggressive tactics. The caller pretends to be a bull moose by challenging bulls with grunts and other rut activity, to get one to come out and fight what it perceives to be a challenger for his cow or cows.

With proper instruction, almost anyone who isn’t completely tone deaf can learn to call moose using their voice. The first thing to realize is that individual moose, the same as humans, have individual voices. Moose sound different from one another, just the same as we do. Having a different calling voice than your hunting partners is okay. The secret is to establish the pitch and tone that you will use in your calling and then strive for consistent delivery. Good instruction, followed with practice, can teach you how to achieve consistency.

The first step in becoming a caller is to either make friends with an expert caller who will teach you or get a set of good moose-calling instructional videos that can take you through the learning process. The following calls have been the most useful for me over the years.

Cow Communication Grunt
For much of the year, moose vocalization heard most often consists of various grunts. A cow will use low grunts when communicating with her calves and other moose. The basic cow grunt will have an “errrh” sound, and when learning to make it, your starting point should be to say the letter “r.” This is a key point, as this sound will be your “pitch” sound. To get a nasal twang to this sound, do two things. First, roll your tongue well back so that it lightly touches the roof of your mouth. Now, say the letter “r,” while keeping the tongue in place. Next, cup your hands around your mouth in a calling position and plug off your nostrils (from the bottom) with your two index fingers. Then, with your tongue rolled back, again say “r.” Note the big difference in nasal sound. Also, your letter “r” will sound more like “rrrrh.” This establishes the basic pitch and tone for all your cow calls. Now add one last touch to make it a cow communication grunt. Use a quick pull on the stomach muscles to force the diaphragm and lungs to sharply expel the grunt sound. If done properly, it now comes out sounding more like “errrh.” This grunt is not loud and seldom exceeds more than one second. Soft versions of this can be used to call cows, and two louder calls in quick succession can stop running bulls.

Cow-Call Sequence
During the rut, cows produce longer calls, trying to attract bulls. The basic cow call has an “errrrrrrrrrrrrrrrrrahh” sound, made by simply extending the sound of your cow communication grunt. Do this by controlling its delivery with your stomach muscles, applying steady pressure against the diaphragm, exactly as a singer does. Practise this extension of the call until you can produce a nice, steady delivery of about 8 to 10 seconds.

Cows in heat don’t usually repeat the same call over and over. They often combine calls of different lengths, in sequences. They do make single calls, two-part, three-part, four-part, and even five-part calls in random arrangement. With new callers, I teach the four-part cow-call sequence, as it’s the one I’ve heard most often in the woods.

These are useful to master because, if you can do them comfortably, you can select any two or three parts of the four-part call to make a two-part sequence, a three-part sequence, etc. These are the basic cow calls hunters use.

1. Broadcast Call
The cow broadcast call is normally used when you haven’t had any action with regular calling. It’s a much longer and louder drawn-out call of 8 to 10 seconds or more and is delivered using a calling horn to give it more volume and direction. The objective is to have the call carry a long distance or be heard better when calling into the wind. When I deliver this call, I often move the horn up and down in a figure-8 pattern, so the horn is high and low with each call. This mimics the cow’s head moving when calling and makes the sound heard as wailing downwind.

2. Cow-in-Estrus Call
This shorter call is used primarily when a bull coming in to your call stops to look for the cow and is reluctant to come farther. It’s most useful when you can see a bull and his actions. When he hangs up looking for the cow for more than a couple of minutes, this call can be used as a teaser to get him to start moving in again. It’s a shorter call of about three to four seconds and is much lower in volume than normal cow calls. I deliver this call directly at the ground in front of me, while facing in the direction of the bull. It will often trigger a bull to continue coming in to the calling site.

3. Cow-in-Estrus Whine
This is used primarily to bring in close hung-up bulls. It’s one of the most effective calls for this. A cow makes it when in high estrus and has been unsuccessful in attracting a bull. It’s a low sound that comes from the cow without her opening her mouth. I usually produce it in two or three short parts: “errah,” “err,” and “errh.” The full sequence only takes about two to three seconds. Make this whine with your mouth almost closed, as if you’re humming. Note that it still has the “r” sound as its base.

4. Bull Grunt
Bull grunts are used with aggressive tactics to challenge bulls. They’re often combined with raking bushes with a scapula or small antler, pretending to be a bull moose raking with his antlers. I actually teach four different bull grunts to newcomers, with the advice to pick one or two of them to become expert in their delivery.

To produce these sounds, use the same calling technique used with the cow communication grunt: a quick pull on the stomach muscles to force the diaphragm and lungs to sharply expel the sound. Bull grunts and raking bushes with a scapula can be successful in getting bulls to come to you during the front side or at the peak of the rut. They’re also useful when trying to pull a bull away from a cow he’s already with. However, on the backside of the rut, bulls are tired from mating and fighting and are more reluctant to rise to a challenge. At that time, passive routines normally work better.

5. Combining Passive and Aggressive
If you get a response from a reluctant bull, a good tactic is to add some aggressive routines, making the bull you’re after think he now has competition. When adding aggressive routines, always pretend that you’re a younger bull with low grunts and, if you like, try lightly raking bushes with the scapula. This often brings in a hung-up bull. Be ready when it does.

Master the moose camp with these 7 tips