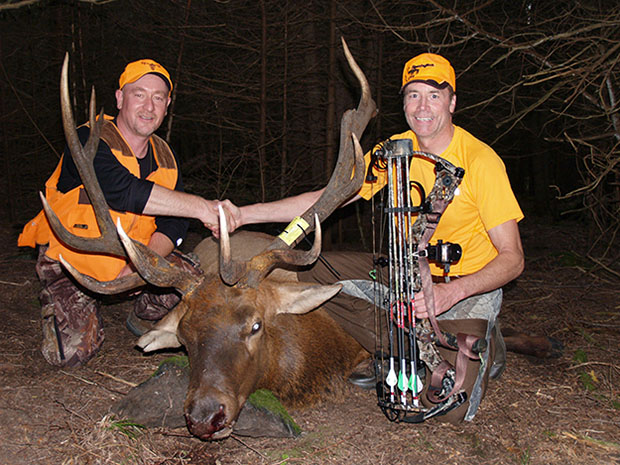 The first bull elk in Ontario to be taken by a non-native bowhunter was tagged on Sept. 20 at 7:30 a.m. The archer, Scott Holland, 55, of Kingston, however, is no stranger to firsts. In 1990, he was also the first archer to harvest a wild turkey in Ontario.

Holland took the 6×5 bull while hunting with his compound bow in WMU 61, Harvest Area 5, locally known as Hartsmere.

A bowhunter since 17, Holland was sitting in his tree stand well before first light when two prime bulls, some cows, and calves passed beneath him. The bull returned during legal hunting light and “it was not long before he presented me with a 30-yard, quartering-away shot,” said Holland.

The previous Tuesday he had passed up a smaller 6×6 at 20 yards, knowing there were larger bulls about.

Hunting partner Robert Giugovaz watched it all unfold from his hide. Previously, they had decided the archer with the better opportunity was to take the shot.
“I am both jealous and pleased for Scott,” said Giugovaz. “He’s a class act hunting partner.”

The accomplishment was reminiscent of a day in April 1990 when Holland, then 32, took the first Ontario wild turkey with his Pearson compound bow.

Although from Kingston, Holland is a staff shooter for Akins Archery in Watertown, New York. In 1989, he was the New York Field Archer and Bowhunters Indoor State Champion. In 1990, he was the Ontario Archery Association Indoor Provincial Champion.

First published on the November-December issue of Ontario OUT OF DOORS magazine. Subscribe.