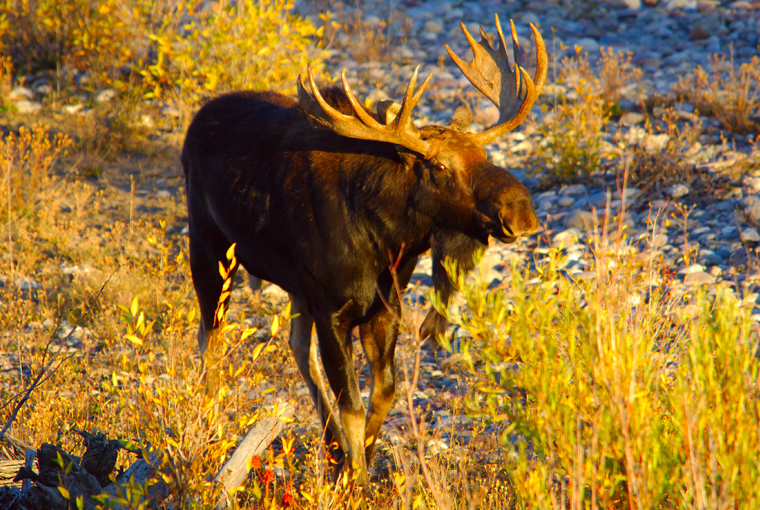 Pushing moose out of hiding and toward spots where your hunting party is posted can be amazingly effective when conditions are right and the hunt is well organized. All it takes is some planning, knowledge of moose behaviour, and understanding of the landscape.

When the season is running out or your hunting holidays are counting down quickly and you’re still holding a tag, pushing moose out into the open may be your best bet. Here are three scenarios you can adapt, modify, and build on to tag more moose.

Moose often retreat to swamps, beaver meadows, and creeks and rivers in hot weather, when hunting pressure is high, or simply as part of rutting/feeding behaviour. These can be great places for setting up a drive.

To push swamps, look for logical escape routes or areas where you can see as much territory as possible. Place blockers and then have one or two drivers walk the inside of the swamp or lowland to get the moose up and moving.

In the swamp push, you’re trying to get the moose milling around the area and moving past the standers. It’s sometimes worth putting standers in tree stands to help them see above the vegetation and increase their chances of a clear shot opportunity. 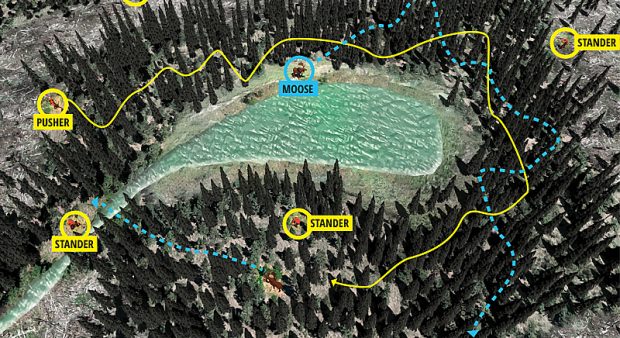 Slogging through swamps can be physically taxing, so have drivers and standers take turns during the drive. 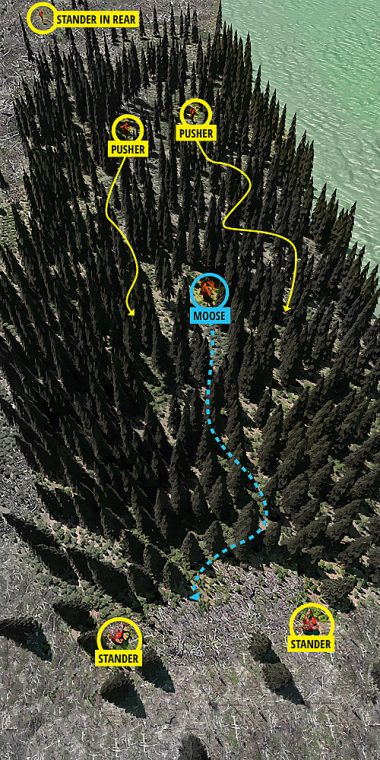 Have one or two hunters behind the drivers at the back edge, as moose will often reverse course, slip through the line of drivers and escape out the back.

Anywhere you have an isolated block of cover, such as a standing forest surrounded by logging cuts or bordered by a lake, you have a perfect spot for a push.

Step one: Quietly scout the edge for fresh sign that indicates moose have entered the block and are still in the timber.

Step two: Set up standers along likely escape zones with good visibility. Whenever possible, they should have the wind in their faces or a crosswind to carry scent away.

Step three: Once standers are in place, drivers move through the block and try to push the moose in their direction. It’s a good idea to move quickly to the next likely block of timber and work it. The more effective pushes you make in a day, the more likely you are to tag a moose.

When you have snow on the ground, as few as two hunters can effectively push moose into a shooting position. You’ll want to set out at first light, cruising logging roads and skidder trails to find fresh tracks.

After you’ve found them, make large loops ahead of the moose’s direction of travel to determine if it has stopped to feed or bed down.

Once you have a pretty good idea that the moose has stopped in a general location, post hunters where moose might be forced to cross openings or move through choke points, offering the stander(s) a shot. Then send a hunter back to the moose track and have them follow it until the moose is moved and comes into the open. 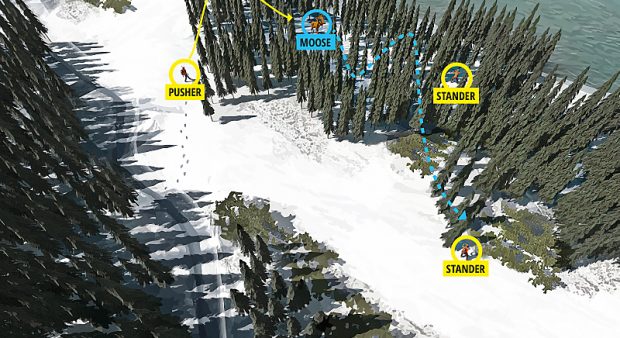 Pick up moose tracks as you follow logging roads

Use satellite images to find places that have potential for moose pushes. Do this well in advance of the season, so only a quick onsite scout is needed to put your plan into action.

Identifying a bull versus a cow track is more of an art than a science, but bull tracks tend to be wider, rounder, sunk deeper into the surface, and can splay a bit more under the weight of large bull.

Cow tracks can be accompanied by the smaller tracks of calves. Big bulls will have a longer stride than cows.

For 6 tips to help get your moose, click here.

Should we hunt calf moose?