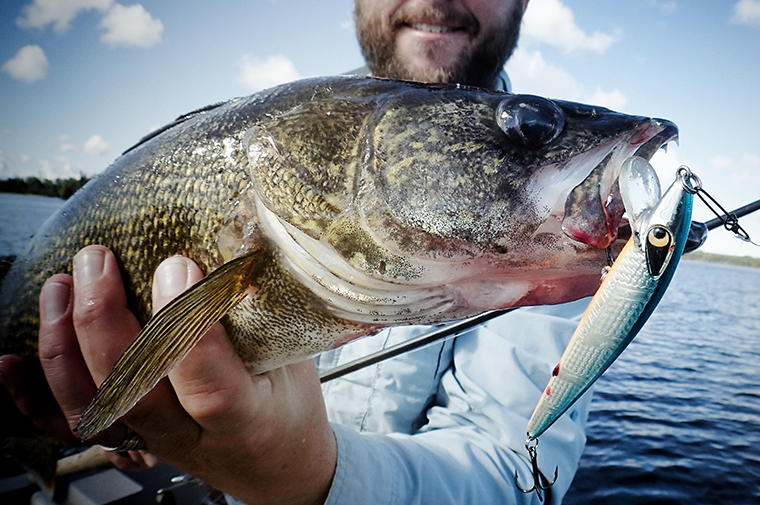 Casting jerkbaits for walleye wasn’t part of my game plan as I headed up the lake, but often anglers are forced to do a one-eighty when walleye are the target. My original intention was to catch walleye with jigs and minnows on windblown points on the lake’s north shore. Turns out, that strategy worked — flawlessly — and we ran out of minnows before lunch. We needed to switch things up.

It was early June, and Lac Seul’s walleye were active in relatively shallow water. Our best depth in the morning was eight feet. We caught fish vertical jigging and pitching jigs towards shore and hopping them back towards the boat. 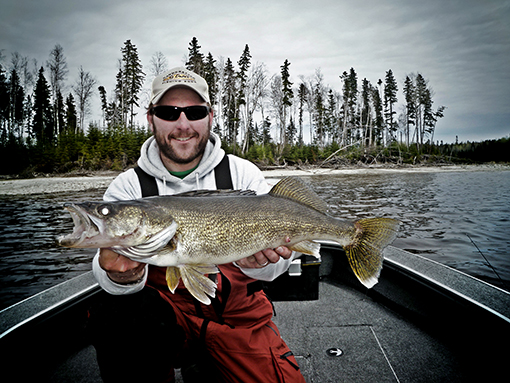 With the bait bucket empty, we decided to cover water by casting jerkbaits. I worked the trolling motor along a section of shoreline between a few waypoints I’d laid down that morning, and right away we were back on fish. Jerk-jerk-pause. Jerk-jerk-pause. Fish on.

We keyed in on a 200-yard stretch of shoreline that featured rock rubble-to-sand transitions. A couple of subtle rubble points extending into the lake proved to be spot-on-spots that gave up fish on each pass.

It was one of those days of fishing that’s hard to forget. The action in the morning was as fast as it gets, but the thing I remember most was that we caught our biggest fish in the afternoon, and all on jerkbaits.

Casting jerkbaits for walleye early in the season is largely overshadowed by live-bait approaches, but when walleye are active in shallow water, it’s an exciting alternative.

A time to jerk

…once temperatures reach the upper 50s and into the 60, fish become much more active.

When waves crash onto shore they stir up the bottom and ignite all levels of the food chain. Wave action also dirties the water, which gives walleye an advantage with their excellent eyesight in low light condition. Mud lines and dirty water are often visible with the naked eye and I look for these when jerkbaiting.

In order to get a good jerkbait bite going you need to look for a couple of things.

-Walleye need to be in relatively shallow water, which they typically are early in the season. Jerkbaits are most effective when fish are within 10 feet of the surface.

-Active fish make or break a jerkbait bite. Springtime walleye can be finicky and there will be days when jerkbaits won’t compete with a minnow fished on a jig or Lindy Rig. But, when walleye are active, they aggressively hunt larger forage, which jerkbaits mimic perfectly. Identifying active fish can be achieved a few ways. Using information from your graph is a good starting point.

-Water temperature, for instance, plays a big part in walleye activity levels. The 40s and low 50s Fahrenheit usually mean sluggish walleye, but once temperatures reach the upper 50s and into the 60s, they become much more active. Look for pockets of warmer water to increase your chances of encountering active fish.

-Another way to gauge if the jerkbait bite is on is if fish are being readily caught using other methods, such as live bait. I saw this work firsthand a few years ago with a guy I was guiding. Everyone else in the boat was fishing (and catching) with jigs and minnows, but this guy preferred casting jerkbaits. In every spot he’d start off casting a jerkbait for 10 minutes, then, if it wasn’t working, he’d switch to a jig. When it was working, he was catching noticeably larger fish on a jerkbait.

-Wind is an important thing to look for. There’s a lot to be said for a good walleye chop when jerkbaits are on the menu. Fishing the windblown side of any structure is a big part of my jerkbait strategy. 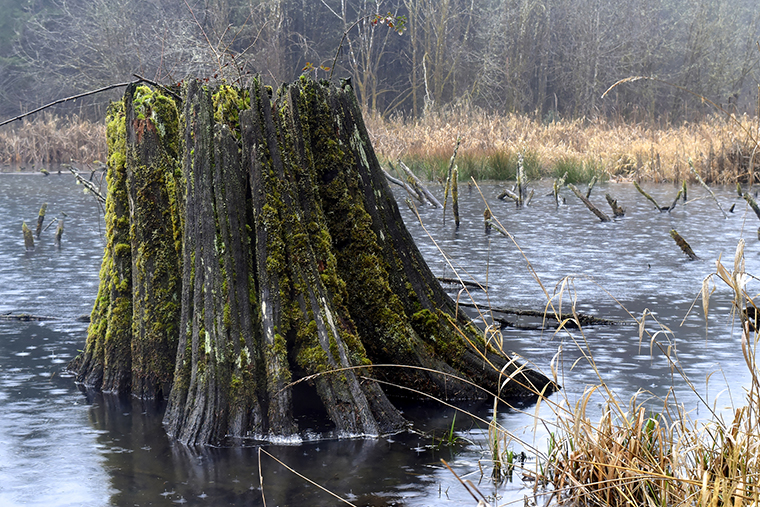 Shallow bays and flooded timber are great spots to hit.

When it comes to good jerkbait locations, there’s no need to reinvent the wheel. Prime candidates are places where other presentations, such as live bait, have worked well. Having confidence that fish use a particular area is a big advantage when trying a different technique.

-Fish shallow water near mainland shorelines, such as large bays, that warm up faster than areas adjacent to deep basins in the centre of the lake.

-In terms of specific structure, I look for shorelines with mixed-size rock rubble and sand. Points and pockets that are swept by the wind are also good bets. Shallow, soft bottom flats with emergent vegetation are worth checking out too.

-Choose locations that are too snaggy to fish with other presentations. Shallow-running jerkbaits can be fished above snags, like rocks and wood. 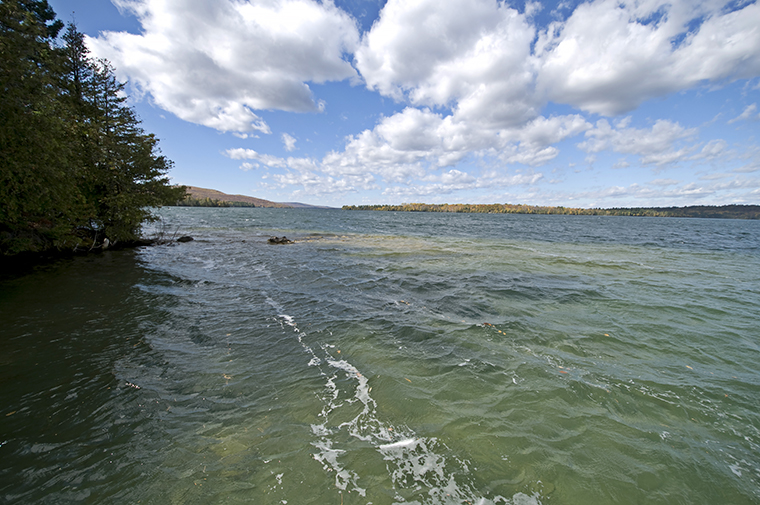 Also look for rock bars near the entrances of bays.

A traditional jerkbait is simply a suspending minnow bait that’s fished with a jerking (twitching) motion. The action imparted to the bait comes from jerking the rod tip. It’s a little more involved than a basic cast-and-retrieve presentation, but is well worth adding to your repertoire.

There are no hard and fast rules for triggering strikes, so it pays to try different cadences until something works. It’s not uncommon to get a strike at the end of a long pause, 10 seconds or more isn’t uncalled for. Allow the bait to sit motionless and watch the line to detect strikes. A low sweeping hook-set will seal the deal.

Keep the boat a cast length from structure to ensure full coverage of the strike zone. Active walleye can be caught in as little as one to two feet of water. I can recall watching a friend catch four walleye on four casts in front of a small washout on a beach. Every fish hit close to shore, and it was a good reminder of just how shallow walleye can be caught.

Another approach to fishing jerkbaits is a method I call “jerk trolling.” I originally used this technique for targeting muskie with extra large jerkbaits, but it works for walleye too. As the name suggests, jerkbaits are trolled behind the boat. It’s a rod-in-hand trolling technique where the bait is constantly jerked ahead with the rod, causing it to move erratically with a series of surges and pauses. It’s a great way to cover water when searching for fish.

Jerkbaits feature a long slender (minnow) profile, usually with a plastic lip. Lipless jerkbaits are less common, but still effective. The most important characteristic of jerkbaits is that they suspend (neutral buoyancy) so they don’t sink or float.

Jerkbaits in the 3.5- to 5-inch range work well for early-season walleye. I use rattling models in stained or dirty water. Proven producers from my tackle box include Rapala’s X-Rap and Husky Jerk, Smithwick’s Rattlin’ Rogue, and Cotton Cordell’s Ripplin Red Fin.

Using deeper diving jerkbaits will help contact fish that are out of reach of the shallow diving models. The bigger the lip, the deeper the bait will run.

Give jerkbaits a try this spring before walleye move to their deeper summer haunts. When conditions are right, it’s a legitimate alternative to live bait that could easily land you the biggest walleye of your season. 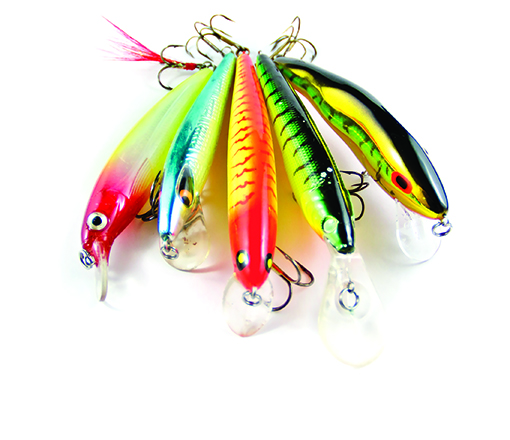 Dedicated jerkbait enthusiasts prefer fluorocarbon line for its low stretch and sinking characteristics. Another option that works is 20-pound braided line with a three-foot leader of 10-pound fluorocarbon, attached with a double-uni knot. Tying the fluorocarbon directly to the bait is preferred, although a small snap allows for quick and easy bait changes without altering the bait’s action too much.

Click here to learn how to catch walleye in the sand.