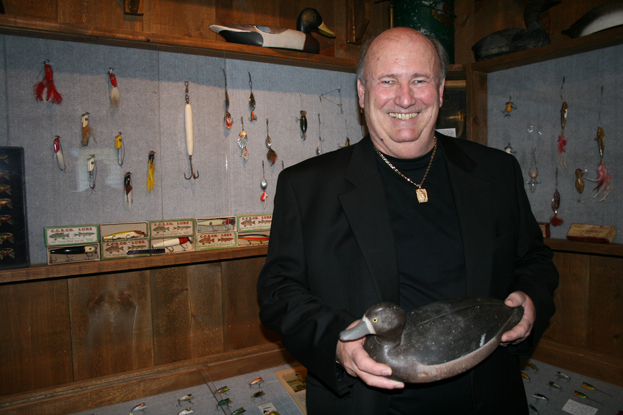 ONE OF CANADA’S largest private collections of fishing lures, along with 28 historic decoys, has been donated to the OFAH and is now on display at its Mario Cortellucci Hunting and Fishing Heritage Centre in Peterborough.

The collection, given by Andy Clement, 67, of Peterborough, comprises approximately 250 vintage fishing lures, including some dating back to the late-1800s. Still a collector, he’s kept the remainder of his antique tackle and plans to bequeath it at a later time.

Although some of the donated lures are rare and highly valued, Clement characterized the gift as “just some fishing tackle,” quite an understatement, considering some pieces are valued at $6,000 to $7,000 and OFAH estimates place the entire collection’s worth at $500,000.

Clement, who has been buying and trading lures and fishing tackle for 30 years, says this is one of the two largest collections in Canada. “But, you get to a stage where you ask yourself, ‘What am I going to do with this?’ ”

He considered selling the collection or willing it to his wife and children to dispense with, but says that it didn’t seem right. “I’ve spent three decades putting it together; it seemed wrong to dismantle it piece by piece,” he said. Instead, he opted to do something good.

“Collectors,” he said, “preserve heritage. There’s no point in doing this if you’re not going to share it.” Hence, his generous donation to the OFAH.
Follow Ontario OUT OF DOORS’s board Vintage Fishing Lures on Pinterest.

“I’m very happy about this,” he added. “The collection will be viewed by a wider audience. When people visit the Cortellucci Centre, they will be able to look at all those lures, decoys, and tackle and get a further sense of their outdoors heritage.

“They possess beauty and many show great creativity and originality; when you look at those old lures you can see the origins of most modern lure designs,” he continued. “You see their evolution.”

Certain items within the donation, such as the world’s largest collection of Outing lures, are notable. This Indiana-based tackle company made hollow-bodied brass lures, says Clement. “But, Heddon bought them in 1929 because they had a patent for a type of tackle box. After that, those lures were never manufactured.”

Clement is no stranger to the outdoors. Among other interests, he was a tournament angler and owner of Classic Sport of Canada Inc. in Peterborough, which represents major hunting and fishing manufacturers and continues as a family business.

OFAH Executive Director Mike Reader is thrilled. “This collection is one of a kind. People will come from all over the province to see it. It’s so impressive and such a large part of our heritage. We’re obviously very grateful.”

This article was originally published in November 2011 in the print edition of Ontario OUT of DOORS.

To tie or not to tie