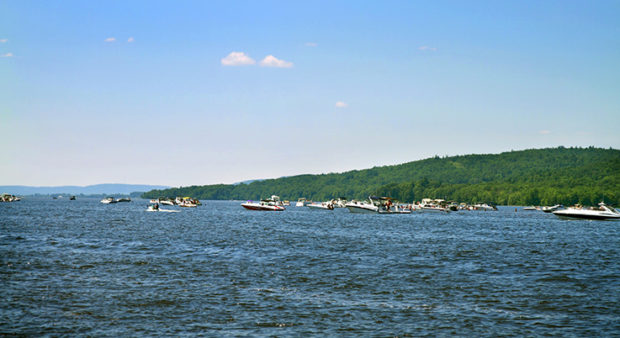 Many fishing experiences involve long treks to distant places, where tales of hardship garner as much discussion as the actual fishing. Yet, as I sat in a restaurant having breakfast with former fishing-show host Reno Viola and several councillors from the Town of Hawkesbury, I could tell this wasn’t going to be one of them. Not only was our destination a short drive from my house, great fishing close to civilization started with a relaxed breakfast in fine company.

My son, Kelsey, and I had been invited to spend the day fishing with Viola to experience the quality angling in a stretch of the Ottawa River around Hawkesbury upstream of the Carillon Dam, one of seven along the river. As we ate, the discussion turned to the ongoing efforts of the city to enhance fish and wildlife habitat and the keen interest councilors have for raising awareness of the remarkable fishing this area offers.

Hawkesbury (pop. 9,000) offers a low-stress ambiance, with all the amenities of a small modern city. The town’s history is tied closely to the impassable rapids that once existed here. In the early years, the rapids powered a sawmill and a canal was constructed to improve the ability of boats to move through the area. The canal was later upgraded and a hydro dam added at Carillon. Vestiges of the area’s early history still remain, including large concrete anchors used to contain logs before they descended the rapids.

From restaurant to river
Following our discussion at breakfast, we made a 2-minute drive to the marina where Viola’s boat was docked, about 15 miles upstream of the Carillon Dam. My son’s eyes lit up when he saw we would be fishing from a luxury pontoon boat, equipped with all the amenities, including a canvas top and washroom.

We started trolling main-river structures, which had accounted for a number of walleye for Viola the day before. Walleye in the 5- to 7-pound range are generally considered to be good fish, but every year some in excess of 10 pounds are reported. Perhaps it was our late start, with the sun already high overhead and temperatures soaring, but the walleye proved stubborn.

Having spent the better part of his career fishing for a living, Viola quickly hopped from spot to spot, never making more than one pass. As with most regulated rivers, fish location and feeding activity is tied closely to the river’s flow. Viola pays attention to water level and current to help predict fish location and activity. It’s all part of the Ottawa’s character, contributing to the quality and diversity of the fish species that call this stretch of river home.

Our search eventually led us to the Carillon Dam, where we switched to jigging shallower vegetated humps. Viola was the first to hook up. A burly scrapper, digging deep to conceal its identity, finally boiled to the surface. In harmony, the three of us blurted out “Channel cat!”

It was an important ice breaker, and soon my son and I were battling catfish of our own. During the frenzy, we caught catfish up to 6 pounds, hefty drum, and a few smallmouths. In spite of the great fishing, at Viola’s insistence, we kept moving so that we could experience more of the river.

As we worked our way along, Viola pointed out some of the amenities that make this area appealing to visiting anglers. This includes Voyageur Provincial Park, which has over 400 camp sites, sand beaches, hiking trails, and interpretive programmes. The Prescott and Russell Recreational Trail also offers biking and hiking for 45 miles.

Anglers can also choose between two free launch ramps and a designated fishing platform at the foot of the Long Sault Bridge. The bridge is a notable landmark and provides a major corridor for traffic between Ontario and Quebec. At one point, we encountered a flotilla of boats anchored at the mouth of the Rouge River where the clean sand and warm shallow water provided excellent swimming, wading, and relaxation.

Not far from there, we shifted our focus to marshy areas along the Quebec side of the river. Swapping spinning and trolling gear for baitcasting tackle, we worked spinnerbaits and flipping jigs through select areas where Viola has come to expect big bass.

After pitching my jig into a stand of bulrushes, I felt a sharp tap and set the hook, prompting a 2-pound largemouth to explode out of the water and land on the deck of the boat. Four more quality fish followed in quick succession.

While there are many ways to describe the Ottawa River fishery at Hawkesbury, it was certainly the diversity that struck us most. Given our late start and relaxed approach to fishing, we tangled with eight different species. Much of this was due to Viola’s versatility and willingness to keep moving and adapt to the many distinct fishing situations this area has to offer.

No hardships involved with this trip, just great fishing close to civilization.