Fish scanner on the Ganaraska 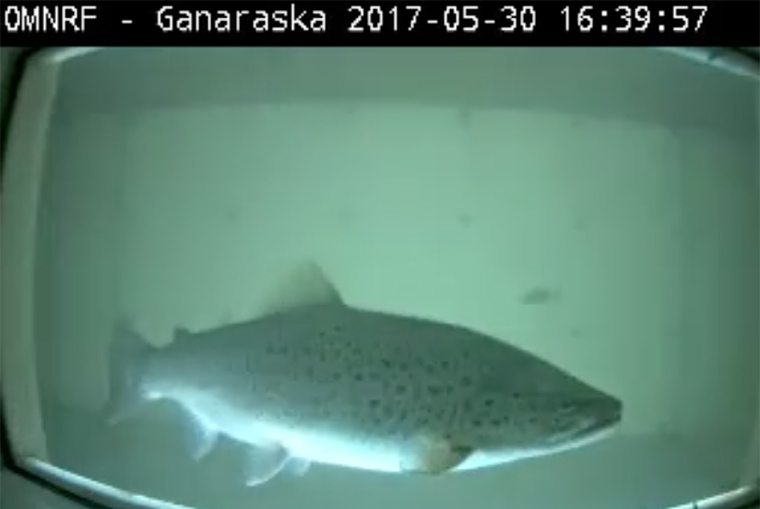 Image from the camera at Corbett’s Dam, courtesy of the MNRF.

Assessing fish as they move through a fish ladder has traditionally been a labour-intensive effort, requiring netting fish at a lower point in the structure and visually checking the species.

Modern technology is changing that. A new fish scanner and camera at Corbett’s Dam on the Ganaraska River allows biologists to see fish going through a fishway remotely, from the comfort of their desks.

Mike Yuille, ecosystem biologist with the MNRF Lake Ontario Management Unit, provided an overview of this new technology at the annual conference of the Ontario Federation of Anglers and Hunters in March.

The best spawning habitat on the Ganaraska River is above Corbett’s Dam, about three kilometres from Lake Ontario. This means fish must pass through the fishway on their way to spawn, providing an excellent opportunity to use the new fish counter technology, which was developed in Iceland.

The system involves an infrared scanner that captures an image of any fish that activates the trigger. The image is a computerized outline of the fish that allows species identification, length estimate, sex determination, and whether the fish is wild or hatchery raised (as determined by an adipose fin clip).

The second part of the system is a video camera that activates after the first part is triggered.

“You can quickly, visually see the fish species as they are going through,” said Yuille.

The River Watcher system was installed in the fall of 2016 and is expected to provide great data from the spring run and into this fall.

The new technology will allow better assessment of spawning returns of Atlantic salmon, which were stocked in the Ganaraska River in 2016.

Now that the technology is proven, a second unit on the Credit River is planned for this year.

The goal is to eventually have the images and data from the Ganaraska available live online for public viewing at www.riverwatcherdaily.is. No firm date has been set, but the goal is to have it active for the fall run.

Get the latest on proposed live bait regulation changes here.