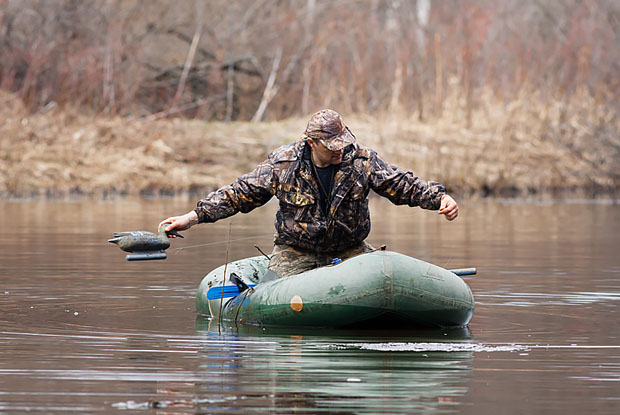 Does this sound familiar? You get to your planned hunting spot and set up your spread an hour before legal shooting time… then it starts.

You hear the dull roar of another boat gradually coming closer. Eventually, it’s within 100 metres and the motor cuts off. They’re so close you can hear the conversation and the eager whining of their dog.

You can hear the water splashing off their waders as they pull the boat to the shoreline. Your shoulders slump.

You shine your spotlight in their direction in hopes they will move to another location. You can hear them talking to each other.

“Hey, are we too close to those guys over there?”

Then they continue to set up their spot as if you don’t exist. This happens all the time to duck hunters on public water.

Gentleman’s agreement
In some scenarios, the newcomers, as the last ones in, would respect the unwritten gentleman’s agreement and move to another location. But, if that doesn’t happen, you might consider this situation as an opportunity.

You could choose to see it as a way to make new connections and forge new friendships in your duck blind.

It doesn’t always pay off, but you could choose to see it as a way to make new connections and forge new friendships in your duck blind. I look at duck hunting as a social event. I plan the outing with friends and family, with the added bonus of shooting birds. And I like seeing other hunters out on the water with their friends and family, too. 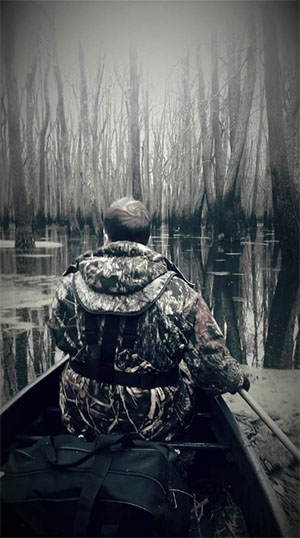 The chat
I’ve been in the aforementioned situation a few times. My first reaction is always the “spotlight shine.” If that fails and safety is an issue, I drive my boat over for a chat with the other hunters.

I suggest that in their current position, I will be unable to hunt as they are in danger so close to my blind and they need to relocate. If that fails, I turn to an alternative solution to a crowded hunting area.

Nothing will de-escalate an opposing party faster than an invitation to hunt together.

I invite them to hunt with me. Nothing will de-escalate an opposing party faster than an invitation to hunt together. Obviously, if there are already four of you in a blind, you won’t be able to accommodate more hunters and your best bet is to politely ask the newcomers to find a new spot for safety reasons, then return to your spread.

I emphasize safety as a reason, because it’s really the only justification for asking the late arrivals to move. If safety isn’t a concern, they have just as much right to be there as you do.

If you are going to hunt from separate blinds a hundred metres apart, all you can do is hope your calling and decoy spread is more attractive than theirs. But, if you invite them to hunt with you, you accomplish one of three things.

Make a friend
First, it surprises the newcomers and causes them to think about this as an option – one they likely hadn’t pondered until now. If they agree, you get more decoys in your spread, more shots going downrange, more high-fives in the blind, and the possibility of making new friends.

Second, it puts the emphasis on the late arrivals to make the decision, as you were here first. You’ve shown your openness to include them in your hunt, so hopefully they will feel obligated to join you or move somewhere else.

Third, if they refuse and safety is an issue, tell them in a non-aggressive manner, “Your location here is unsafe as you’re right in the middle of my line of fire. I can’t reorganize my decoys to accommodate you arriving late, if you can even move a few hundred metres away, you’ll be doing us both a favour and we won’t scare each other’s birds away.”

Chances are good this friendly approach will be met with acceptance, and for me, connecting socially with other waterfowlers is part of the appeal of duck hunting.