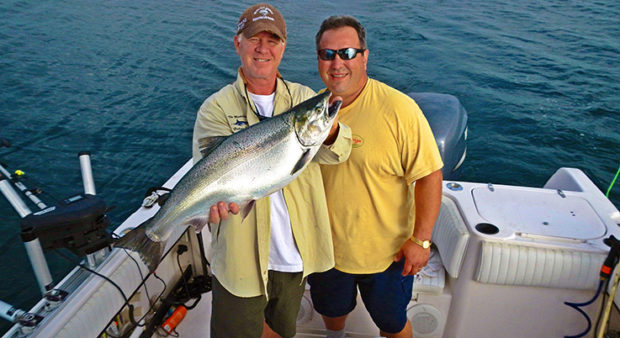 The first salmon I caught on Lake Ontario was in 1975. Eager to participate in the salmon frenzy of the time, I launched my 12-foot cartopper in Port Credit. The calm August morning had encouraged over a hundred other boaters to experiment with their new-found salmon skills.

Dropping my offering down 30 feet with a manual downrigger, I noticed a nearby boat playing a fish. Minutes later, it was my turn. When the 8-pound coho came to the net, I was ecstatic. That was the start of my salmon addiction.

Coho characteristics
Silvers, as they’re often called, are notorious for feeding aggressively and are usually found travelling in large schools. Their temperature preference is 52 to 56˚F, about 3 degrees warmer than that of chinook salmon, and therefore they are usually found higher in the water column. Most coho favour the open water 10 to 15 kilometres from shore. Reaching maturity at 3 years of age and weighing from 6 to 10 pounds, coho salmon enter tributaries on their spawning run from mid-September through October.

History of stocking
Forty years ago, coho were stocked in the Great Lakes to control the exploding population of alewife, a non-native prey fish. It was also hoped that sport-fishing opportunities might emerge. No one could have predicted the biological destiny of coho.

There have been wide variations in what each of the Great Lakes has experienced in terms of coho populations.

In Lake Erie, the last stocking of coho was done by Pennsylvania in 2004. There does not appear to be any level of natural reproduction in the lake.

The last stocking in Lake Superior was in Michigan in 2007. “In general, most agencies around Lake Superior have ceased their coho stocking programs primarily because the vast majority of fish caught are from wild naturalized populations and the contribution of continued stocking is negligible,” said Steve Chong, a fisheries assessment biologist with the Upper Great Lakes Management Unit.

In Lake Huron, the status of coho is similar to Superior. Coho were never stocked in Lake Huron by the Ministry of Natural Resources (MNR), and Michigan ended its program in 1989 due to lack of returns.

“Wild reproduction of coho salmon maintains this species in Lake Huron,” said David Gonder, management biologist for the Lake Huron Unit. “There’s no targeted fishing for coho, but a handful of small fisheries exist in tributaries during the fall spawning run,” he added.

The destination of choice for anglers targeting coho continues to be Lake Ontario. The first stocking occurred in 1969, and, since then, the number of coho stocked has fluctuated. Throughout the 1970s and early 1980s more coho (an average of 200,000 per year) than chinook were stocked by the MNR.

That has been reversed, with significantly higher numbers of chinook (500,000 on average per year) being stocked since the 1980s. Chinook fingerlings can be released at 4 to 6 months of age and are less expensive to raise to stocking age.

“In the late 1980s and early 1990s, nearshore staging and upstream migration of adult coho seemed to become progressively later,” said Marion Daniels, now retired as a management biologist with the Lake Ontario Assessment Unit. “Ongoing difficulties in meeting egg targets from the Credit River meant that alternate sources had to be found, which increased production costs significantly.” Late-fall returns also presented safety hazards for fishermen on the open waters of Lake Ontario.

“Coho stocking was discontinued from 1992 to 1996 and again from 2006 to 2007,” said Daniels. However, the Metro East Anglers (MEA) and the Credit River Anglers Association are making an outstanding effort to continue stocking coho.

In late 2006, the Ontario Federation of Anglers and Hunters took over management of the MNR’s Ringwood Hatchery near Stouffville through a five-year contract, and MEA took on the role of host club. The two groups partnered to raise salmon and trout for stocking in Lake Ontario, including the restart of coho collection in 2007. In late 2011, the MEA signed a new contract with the MNR to manage Ringwood on their own. “Currently, over forty members volunteer countless hours to assist in a variety of fish preservation projects,” said Bruce Burt of the MEA.

Over 200,000 coho fingerlings have been stocked out of Ringwood since 2008. Coho mature and return to spawn in two years.

In the past, most fish were stocked in the Credit River, since this was traditionally the host river for fall egg collection. Eggs collected from a wild source as opposed to hatchery eggs must have MNR permits, and the number of eggs allowed on permits in recent years has averaged over 100,000. There have been problems with egg collection and capturing returning adult coho. However, 2012 was a good year. “In only two trips to the Credit, the MEA volunteers were able to secure their permitted number of 130,500,” said Burt.

At maturity, these silvers will mix with the 250,000 or so that are stocked from New York State annually.

Tactics
In the spring, the Lake Ontario hot spot is the southwest shore from Port Dalhousie to Grimsby. Prime time is late May to early June, starting close to shore in less than 20 feet of water. Bodybaits are the lure of choice.

Shane Thombs, who operates FINtastic Sportfishing finds most spring coho measure about 24 inches and weigh 4 to 5 pounds. In August, these same fish weigh about 8 pounds.

“When the nearshore fishery slows down, move out to water depths of 180 feet and fish the entire water column,” says Thombs. “Mid-size spoons, such as the NK 28 in hot colours, are my favourite. Run them with a short lead 10 feet off the downrigger ball.”

On the north shore of Lake Ontario, Kevin Phillips operates Chasin’ Tail Charters out of Cobourg. Although many anglers focus on the “blue zone” 15 to 20 kilometres off shore, Phillips has caught good numbers of coho in August within a kilometre or two of shore.

“If you catch one coho, work the area hard since they’re always found in schools,” suggests Phillips. When targeting coho in shallow water mixed with staging chinooks, Phillips prefers flasher-fly combos and bright-green colours. Run Atomic flies on short leads for more action. Set these rigs as the highest in the spread on downriggers and Dipsy Divers. These combos have been deadly for Phillips on skinny-water coho the entire month of August, and the catch rate I’ve had is the closest I’ve come to finding a cure for my salmon addiction.