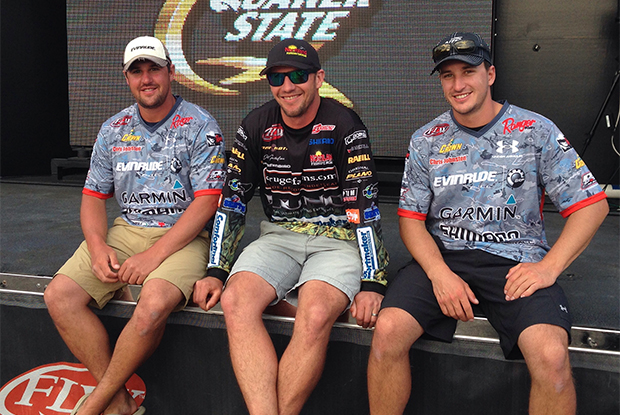 Canadians made a huge splash at the 2016 Fishing League Worldwide (FLW) Forrest Wood Cup (FWC) at Wheeler Lake in Huntsville, Alabama. Peterborough brothers Cory and Chris Johnston and Ontario OUT of DOORS field editor Jeff Gustafson of Keewatin, Ontario made Canada proud as they fished for $300,000 U.S., from August 4 to 7.

Under heavy humidity and 34˚C temperatures, the dog days of August gripped Wheeler Lake, making it difficult for the 50 anglers. In this event, all anglers fish the first two days. The field was cut on Saturday to the top 20, and on the final day only the top 10 competed.

Following a difficult practice, Chris Johnston advanced each day and qualified to fish on championship Sunday. On the final day, he managed a five-bass limit for 10.5 pounds and a four-day total of 44.8 pounds. This was good enough for 8th place and $22,000 U.S. in prize money. He focused on school bass each day, catching both smallmouth and largemouth that were hunting tiny shad.

Jeff “Gussy” Gustafson alternated flipping and pitching shoreline trees with schooling bass. The fickle bite proved too much for Gustafson and he finished 44th with 11.7 pounds.

Cory Johnston struggled and finished 50th, bagging only one bass for 1.8 pounds. To qualify for the Forrest Wood Cup in his rookie season is a huge accolade for Cory. This is Gustafson’s fourth season and first FWC appearance. Each won $10,000 U.S. for their efforts.

Chris Johnston had a stellar 2016 rookie season. He easily won Rookie of the Year and narrowly missed winning Angler of the Year, for which he placed second, behind legendary pro Andy Morgan of South Carolina. In addition to his award, Chris received a new, fully rigged Ranger boat for being the highest-ranking Ranger Boat touring pro.

John Cox of DeBary, Florida, claimed the FWC victory, which he led wire-to-wire. After the second day, he held a 6-pound 7-ounce lead only to see it fizzle away to a mere 9 ounces on the third day of competition. Cox held steady and added 11 pounds, 8 ounces on Sunday to claim the victory with a four-day total of 54.13 pounds.

Bucking local wisdom, Cox navigated 14 kilometres up the distant Cotaco Creek far from the popular deep-water ledges and schooling bass that Wheeler Lake is known for. Skipping a Jackall Iobee Frog, a buzzbait, and a wacky-rigged worm under the numerous overhanging trees that lined the narrow, log-infested creek, Cox was able to distance himself from the pack.

At times it seemed the creek was running dry of bass, but in the final hours of the event Cox secured a five-bass limit and victory that included $300,000 U.S. in prize money.

The FLW is one of the premier tournament organizations that recruits competitors throughout the bass fishing world. The Forrest Wood Cup is the end-of-season championship for the top 50 anglers on the Walmart Tour and winners from semi-pro and grassroots events.