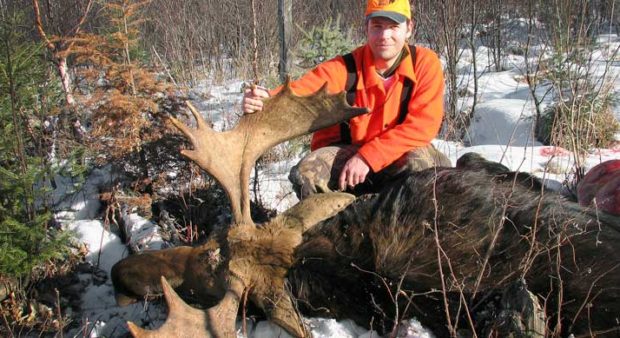 Few events signal the arrival of fall hunting season like the first real snow. Yes, coloured leaves and frost are good indicators, but nothing screams fall like 6 inches of the white stuff.

It’s often moose hunters who open their tent flap to see the world turned white. It can be just a skiff, but occasionally, snow blankets the world, forcing hunters to plough, slip, and slide through the bush in their quest to fill a moose tag.

Hunting in these conditions is challenging, but if you adapt, it can also be highly rewarding. You need to be ready for it to come, and if you hunt moose long enough, it will. In the North, where most of the province’s moose hunters set up camp, snow is a possibility any time after August. Once you’re into November, it’s almost guaranteed. Whenever it arrives, snow is both a help and a hindrance.

Moose biology and snow
Moose are made for snow and cold. It could be argued that a healthy moose is more comfortable in a January cold snap than in a July heat wave. When the snow flies and the mercury tries to hide in the bottom of the thermometer, knowing how moose adapt to cold temperatures is the first step in formulating a successful hunting strategy.

One of their main adaptations for dealing with harsh winter conditions is their size. Because moose are big, they have a relatively small surface-to-bodymass ratio. A moose’s coat also provides great insulation — falling snow often accumulates on its back without melting. That’s important to remember when looking for a dark moose in a snowy world. Finally, its long legs help it travel relatively easily in deep snow.

First snows
According to Arthur R. Rodgers, research scientist for the Ministry of Natural Resources (MNR) in Thunder Bay, snow doesn’t have much impact early in the hunting season. “Until snow gets to about 20 centimetres (8 inches) or more, moose simply ignore it,” said Rodgers.

“It is unlikely to be deep enough to impact their travel patterns, or their ability to move efficiently to feeding areas. Moose are generally unaffected until about 60 centimetres (2 feet), when they move into deeper cover. Over 80 centimetres (31 inches), and moose start to have difficulty moving around. They might seek shelter from a storm in deeper protective cover, but November snow storms don’t drive them to large migrations,” he added.

Dr. Vince Crichton, retired certified wildlife biologist, corroborates Rodgers’ observation that heavy snow impacts moose activity in the short-term. “One of the interesting things about moose is that they don’t move much during heavy snowfalls, at least at the start of the winter,” said Chrichton, who spent 40 years studying moose for Manitoba Conservation. “They go into heavy cover and wait out the storm. I’ve seen bulls from the air during aerial surveys that were almost totally covered in snow.

“You will go to an area and there will be no tracks or other sign, but once the low-pressure storm passes, they will become more active, and tracks will abound, as they move about feeding.”

The upside of snow
Snow has advantages for moose and hunter. Moose can overheat, so a snowstorm or cold front can make it easier for them to move around. For the moose hunter, that’s a good thing.

Stick to thick cover when heavy snow is falling, and focus your efforts away from wide-open logging cuts. Home in on areas where moose can find shelter, such as dense, low-lying thickets with a good overhead canopy of trees to block wind and snow loads. Once the snow stops, hunt hard, because moose will be on their feet moving.

Across most of the province, rifle hunters are catching the tail end of the rut on opening weekend, and cooler temperatures can have a positive impact on their calling success.

“An early snow would not have any impact on their mating and rutting behaviour,” said Rodgers. “But, some might suggest they become more active as temperatures get colder.”

Use fresh snow to help find areas of moose concentration, then focus on those areas and plan your strategy accordingly.

Work the loop
It’s important, according to Gollat, to hunt to the side of the track and loop back into the moose’s line of travel instead of dogging the track itself. “I don’t follow right on the tracks but keep looping back to them, with the terrain and wind to my advantage. This approach prevents me from bumping into the moose, surprising us both. Later in the year, there are often multiple moose around, so staying on one track is harder. And again, you can bump into or spook bedded moose that have circled back and are actually now behind you. By staying where I can see what is up ahead of me, I can spot a moose without spooking it first,” he said.

Taking a track
While snow and cold temperatures are always a possibility during the early part of the season, they are almost a certainty further in. Late-season hunting means shorter days, harder slogs, and frozen fingers. On the upside, it can also mean active and concentrated moose herds, fewer hunters, and tracks that show you where moose are going.

“I normally wait for late season when there are fewer hunters around,” said Rick Gollat of Thunder Bay, an avid moose hunter and retired Ministry of Natural Resources moose biologist. “Snow also adds a new dimension to the hunt. Before the snow falls, you can call, set up a stand to look over an area, or do some walking and hope you will bump into a moose, but snow lets you track,” he added.

Cobalt area moose hunter Darrell Browne is also a proponent of tracking. “When it snows, we look for tracks. When a hunter can find fresh tracks, they can catch up to that moose 90% of the time. That’s pretty hard to do without snow,” he said. Multiple sightings are also possible. “Moose seem to sense when the snow is coming, because they start grouping up,” added Browne. “We’ve seen as many as seven together just before the snow comes.”

While you might think a short twolegged hunter tracking a wide-ranging, long-legged moose would be an extreme — if not impossible — challenge, Gollat’s experience suggests otherwise. “We have had very good luck tracking. You can hunt this way as a single hunter or as a group. Typically in the late season, moose aren’t travelling much. If you find a fresh track, that moose is within a half mile of you. If you follow the track, you will at least find the moose in its bed. You might spook it, or fail to spot it, but you will catch up to it,” he said.

Tracking a moose, however, is not as simple as jumping on its tracks and running the beast down. Part of doing it right is learning your hunting grounds.

“Once you’ve hunted an area for a while, you get to know where and how the moose use the landscape and habitat,” said Gollat. “This helps you gauge when to go faster and when to slow down while you track. Normally, you will notice that moose are either travelling, or meandering and browsing. If they’re travelling, you need to go faster, and if they’re feeding and you’re finding fresh beds and fresh droppings, you need to slow down. Moose typically browse and bed in cycles, while moving through cuts that are from 5 to 20 years old.”

Making the drive
While tracking is a classic snowhunting technique, still-hunting and pushes or drives also make sense at times. The trick is to use the snow to help you predict where the moose will go and where they’re holed up. With snow on the ground, moose will likely be hungry and feeding in logging cuts that also have access to protective cover.

Many animals will concentrate in a small area, leaving lots of vacant landscape void of moose. Your first job is to cover ground. Don’t waste time poking along slowly for fear of spooking animals. Your mission is to find fresh moose tracks and other sign as fast as possible. Once you’ve found them, it’s time to slow down, and look carefully.

If you have a few bodies and know where moose are hiding, plan a drive. Post hunters around possible escape routes, then have one or more hunters move through likely areas to get moose out into the open.

Use maps, GPS units, and radios to plan the drive, and keep in touch with other hunters while it’s going on. Have someone posted behind the drivers. Moose are likely to pop out the back door as the drivers walk through.

With any drive, the more hunter orange you wear the better, and make sure everyone reviews rules for safe fields of fire before the hunt starts.

Whether it’s an early dump or the last week of the season, snow opens up a new world for the moose hunter. For those who can use it to their advantage, a blanket of white can be the best thing to see from the inside of your tent flap.

First published in the 2012 November/December issue of Ontario OUT OF DOORS.