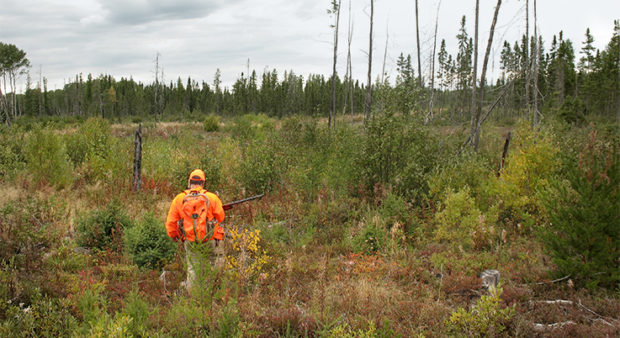 As I turned the bend in the trail, a grouse scurried across the gravel path and into the ferns. “That’s a ruffed grouse,” I uttered to myself, dismounting my ATV and ready to slip my shotgun from the case. Until that point in the morning, only spruce grouse had been co-operative, but perhaps the slight change in habitat was beginning to work in my favour.

As I turned towards the bird’s last known location, another scooted across the trail and then another pair. I followed them into the edge cover, still green despite a frost a few nights before.

As a southern grouse hunter, I expected an immediate heart-stopping flush. Instead, I was met by silence, then a quiet “putt-putt,” betraying the bird’s location. Seeing its head sticking out from the ground cover, I moved in for the flush. But, it simply walked away. So, in a move seldom written about in classic grouse-hunting literature, I took chase and waved my arms, trying to get it to fly. It wouldn’t.

Frustrated, I allowed myself to commit what most southern wingshooters consider the ultimate act of scoundrels and aimed my tighter choked barrel at its head and fired. When the smoke and debris cleared, I walked in to pick up the bird, but was shocked to see it walking around. How could I miss such an easy shot? I finished it with my second barrel. Well, as you probably guessed, it wasn’t the same bird. It was at the base of a deadfall. The second bird was also tucked into my game vest.

By definition
The north can mean different things to different people. Many in urban centres such as Toronto, Hamilton, and Oshawa often refer to the Kawarthas, Muskoka, or other popular vacation destinations as “up north.” To be clear, for this article, I’m speaking about north of Sudbury.

If the definition of north varies, so does peoples’ definition of grouse hunting. To some, the essence of it is a shotgun-toting wingshooter and a dog working an old orchard of a forgotten homestead. To others, it means covering miles of trails from the back of an ATV with a grouse gun in the gun boot. Both methods can be effective, albeit entirely different experiences. What all grouse hunters share, though, is a passion for upland game birds. Most of those who subscribe to either discipline would agree that as far as grouse are concerned, Ontario’s north is the promised land.

Added bonuses
Aside from spectacular landscapes, vistas brushed with autumn colours, and few fences to limit access to great coverts and birds, southern hunters will also find a mixed bag of grouse in the north. Ruffed grouse, sharptails, and spruce grouse can all be encountered in good numbers, and depending on when and where you hunt, in a single day. Also, for those who venture far enough north, there’s the possibility of ptarmigan, which are predominantly seen on rare occasions of population eruptions and a subsequent southern push that can find them in land accessible to the average hunter.

Same, but different
Northern ruffed grouse are the same species as southern birds. Physical similarities aside, northern birds can differ from paranoid, quick-to-flush southerners. Due perhaps to their limited exposure to humans, northern grouse are more inclined to allow a planned approach. Road hunters can easily dust a few birds even after they slam truck doors and uncase shotguns. Walking hunters will find birds tend to hold better for a flush with or without a dog. Either way, their tender white flesh is just as delicious, making them the favourite of most grouse hunters.

If northern ruffed grouse are thought of as easy to approach, spruce grouse can be downright pushovers. They will, as their name indicates, most likely be found close to stands of spruce or Jack pine.

In fact, their tendency to eat conifer needles gives them the reputation of tasting a little sour. While this might be true later in the year, in the early part of the season, before snow covers low berries and succulent greens, they taste good and are well worth adding to your daily bag.

Sharp-tailed grouse are hidden treasures of the north. Harder to find than their forest-dwelling cousins, sharpies are big birds and are most often in coveys along clear cuts. Getting close enough for a shot isn’t as easy with these brutes. Using a good dog or having a few gunners walk parallel through cover are the best ways to hunt them.

Sharptails have dark flesh that has a slightly gamier taste and, while not to be compared with ruffed grouse, are still tasty.

Birds of a feather
As different as the three main species of grouse are, there’s a common thread to keep in mind when hunting them. Look for openings in thick cover. All grouse are attracted to these areas because the sunlight that penetrates them nurtures and ripens their favourite autumn foods.

This isn’t to say they won’t be in thick growth. They use it as protection from predators. Raising a gun and connecting with a bird in places like this is a tough proposition, though, thereby proving the birds right.

Four-wheelin’ ways
When hunting grouse in the north, opinions and techniques vary. Each method has dedicated proponents.

If you’re after meat for the freezer, you will be less inclined to bother with anything other than looking for birds along the miles and miles of trails from an ATV. With gun boots and coolers attached, hunters can motor away the day. When birds are spotted gravelling on trails or sitting on tree limbs, hunters simply stop, dismount, uncase the guns, and attempt a head shot at their quarry. I suspect more northern grouse are bagged by this method each fall than any other way. It can be so productive that hunters need to watch their daily bag and possession limits.

Dog days
Traditionalists have a place in the north, as well. Drawn by bloated bird numbers, each year hunters take their pointing dogs or flusher/retrievers north, with a reasonable chance of putting them on enough wild birds for a crash course in training. Clear cuts, openings in cover, and along the sides of trails are great places to start. Using dogs is a excellent way to find birds that have either learned to be cautious of trails or escaped detection by the fast-moving ATV crowd.

A simple plan
Then there are those who embody the KISS principal (keep it simple stupid.) What these hunters might sacrifice by way of numbers in the game bag is made up for by not having to deal with feeding and tending to dogs or maintaining and trailering ATVs. A pocket full of shells, a gun over the shoulder, and a good pair of walking boots are all foot hunters need. They, too, are wise to use the trails to access likely looking areas, because much of the north can be all but impossible to penetrate by bushwhacking.

The right stuff
Grouse in the north are no more able to take a shot than grouse elsewhere. However, shooting conditions might dictate a choice other than what you’re accustomed to.

For the road hunter, a 12- or 20-gauge shotgun will do just fine. A .410 gauge or a .22 rimfire rifle are also used by those seeking a little more challenge in a hunt that to some can be a bit like shooting fish in a barrel at times.

A shotgun with a full choke is popular among this group, who tend to shoot at birds standing still along the sides of trails or on low branches. The biggest advantage of the full choke is that little meat is spoiled if you connect with a good head shot.

In my opinion, the foot hunter would be wise to stick to more traditional shotgun choices. By this I mean 12-, 20-, or 28-gauge shotguns with a modified choke in a single-barrel gun or open cylinder in the first barrel and modified or full in the second. I say full choke because sharptails take a good wallop to knock down anytime. Once they get out a bit, this is even more the case.

To many hunters, the north provides the best chance at filling a big-game tag. As often as not, grouse simply offer a change of pace from hours in a blind waiting for one shot at a bear or moose. To a grouse hunter, though, it’s as close to nirvana as it gets. It’s a place where you can while away the day on foot or four-wheeler or show a young dog enough grouse to make a bird dog out of it. If the north is truly the promised land, then surely any southern grouse hunter should make a promise to visit it from time to time.

Ruffed Grouse: Heir to the Throne