Putting myself into a situation where I could fish every morning and bear hunt every afternoon was merely a dream, until I laid in at Golden Eagle Camp and Outfitting. The Camp is set against a densely forested area off Hwy 65, near Elk Lake, overlooking the Montreal River. While perfectly situated for hunting and fishing, I was pleasantly surprised to see that Golden Eagle Camp caters to a wide variety of outdoors folks, from family campers and beach lovers, to dog owners and trail walkers.

But our priority was bear, and first on the agenda was a camp meeting where owner Bruce Wilkins clearly stated, “Wait for the bear to turn broadside. Shoot to kill, no risky shots or head shots.” These no-nonsense instructions were followed by bear stand allocations and a voluntary trip to the lodge’s rifle/archery range. 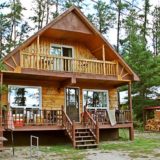 Bear tales
We were guided to our hunting locations, then were left on our own for the rest of the week. Our day’s hunt began with recharging our bait stations with fresh bait that was supplied to us, and ended with a gathering at the Camp’s bear shack. By the third evening, three hunters had found their mark, including my son-in-law Troy McAdams. His 240 pound boar fell to a single slug shot from a 12-gauge.

Storytelling is alive and well at Golden Eagle Camp’s bear shack. Each evening hunters shared their exploits. My turn came after my entertaining encounter with a bold young bear.

I was just settling in to my ground blind when I caught a glimpse of a black spectre moving swiftly through the thick foliage.

The 65-pound bruin moved quickly into full view, no more than 20 feet in front of me. I was ecstatic to see the animal, but had no intention of shooting it. Well, this feisty little bear leered directly at me, then the youngster lunged like a bullfrog at me — three times — before stopping and planting his feet into the soft ground like a child pounding a ball of Silly Putty.

He barked like a dog and snapped his teeth at me before doubting himself and running to the nearest tree! He hung there like a confused woodpecker for awhile before shimmying down and sauntering to the bait to select an old beaver tail to chew on. I was awestruck and amused at the same time. I was also keenly aware of the possibility of an adult nearby, but there were no more surprises.

My bear
Every evening Bruce and his guide Byron Saul would wait by the phone at the bear shack, eager to respond and assist a successful hunter. On the fourth evening I made that call.

Troy had joined me. We could see out the blind’s small window in opposite directions. Suddenly he began shaking my arm and muttering silent screams of attention! I assumed he’d either had a nightmare or he’d seen a bear approaching. I silently positioned my rifle out the porthole. I was amazed at how well I could hear two male hearts beat in this small blind, as the lone sow emerged into full view at 40 yards.

My father taught me years ago to never look at an animal, but only at the precise spot you want to shoot. I could see my mark, slightly behind her powerful front shoulder.

The first round erupted, seeming to shake every tree downwind and curling the sow to the ground. Although sure of my mark, I instinctively racked in another round and drew down to put one more into this large animal. She never left the site.

Not just bear
By week’s end, 11 hunters had seen 26 bear and 7 had been killed. Bruce and Jennifer Wilkins encourage successful hunters to sample the fishing and boats that are provided for hunters to further enjoy their stay. Troy and I found superb walleye, pike and bass action on the waters of the Montreal River and excellent fish cleaning facilities back at the camp. We also spent time mingling with vacationing guests at the small beach and fire pit, while children played on the wet slide and water trampoline.

Although it was great to be away from civilization, we occasionally took advantage of the main lodge for its WIFI service, comfortable recliners and Satellite TV.

Reflections
Bruce and Jenn have created an incredible blend of outdoor cultures, with bear hunters being joined by anglers, seasonal campers and vacationing families and their pets. Even non-hunters regularly attended the bear shack in the evening to see the day’s kills. Young people would ask if they could touch the fur and see the claws. For me, it was an encouraging sign of respect and interest from many differing outdoor cultures, able to share one another’s passions.

Originally published in the August issue of Ontario OUT OF DOORS. Subscribe today.