Archery and bowhunting: the perfect match 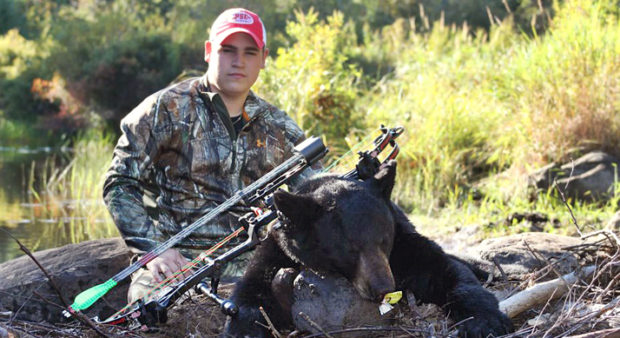 At 21 years-old Christopher Perkins from Athens, Ontario releases more arrows in a week (and hits more targets) than the average hunter will in their lifetime. Shooting a compound bow, Perkins won the World Archery Championships in 2011 and will be defending his title in Turkey during the 2013 event, to be held from Sept. 29 to Oct.7.

Perkins competes in about 20 competitions in a year, making archery his full-time job, but he took some time out to chat with OOD about archery, bowhunting and how the two complement each other.

April Scott-Clarke: When did you start bowhunting?
Christopher Perkins: As soon as I could get my licence, age 12. I started competing at archery at age 11, though.

ASC: How has archery helped you with bowhunting?
CP: Archery polishes your form and accuracy quite a bit. It makes you a better bowhunter because you are honing your skills, improving your shot placement, and accuracy.

I like to have my hunting bow shoot relatively the same as my target bow. I want it just as accurate and just as forgiving. When you are hunting, you want to make a nice clean ethical shot — archery helps in every single way.

ASC: What are some common mistakes bowhunters make?
CP: Buck fever seems to get a hold of everyone. Hunters set the pin on one thing and as soon as it stops, hit the trigger. If you are shooting a trigger style release for hunting, which is what most people do, you want to have it set a bit on the heavy side. It’s just like a rifle trigger, you want to wrap your finger around the trigger and pull through.

ASC: What advice would you give to bowhunters?
CP: Get your bow tuned up before the season. Practice in the offseason. Know your equipment and know your limits. Know how far you can shoot comfortably and accurately. For most people that’s going to be between 20 to 30 yards.

Bowhunting isn’t an easy task. You don’t just go out, see something and shoot it. You have to learn it. It’s like anything, if you want to be good at it, you have to practice.

ASC: How often do you practice and what does practice consist of?
CP: Pretty much everyday. When I practice, I shoot a couple hundred arrows and I’m basically practicing my form. I have ranges in the basement and outside. If the weather is decent, I shoot outside. I shoot our set competition distance, which is 50 metres.

ASC: What is your comfort range when hunting?
CP: I don’t shoot anything over 50 yards. Yes, I’m accurate past that — I can shoot comfortably at 100 yards. But there are so many error factors when hunting — you have a broadhead, a larger diameter arrow, weather, etc.

ASC: What’s next after worlds?
CP: Bow hunting for deer opens here on Oct. 1, so I’ve got my hunting stuff ready to rock when I get back from Turkey on Oct. 7. A buddy and I are also planning a hunting trip to Arizona, but that’s all in the works still.

Perkins leaves for the 2013 World Archery Championship on Sept. 25, 2013. The event takes place every two years.