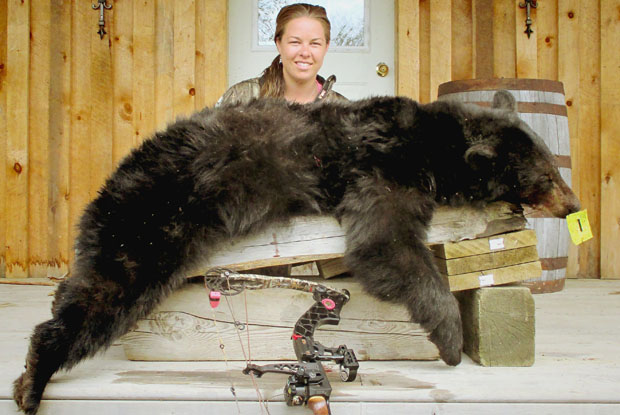 Definitely not your typical girls’ getaway

When four women in their mid-20s plan a spring escape, you might expect them to choose a southern destination with tropical drinks. Well, not these ladies. They spent their vacation right here in Ontario’s bear country, participating in the spring bear hunt pilot project.

None of them had targeted bears before, but they were far from rookie hunters.

In late May of 2014, Shannon Kelly, Jordan Kelly, Amy McPherson, and Megan Smith — each armed with bows — jumped into their vehicles and drove from two to five hours to meet up in Alban for a week of bear hunting with a local outfitter. None of them had targeted bears before, but they were far from rookie hunters.

Shannon first joined her father, now a retired conservation officer, on hunts when she was nine years old and got her hunting licence when she was 12. She introduced her best friends Amy and Megan to the outdoors a few years later and since then, the three women have targeted everything from turkey to deer.

Jordan, Shannon’s older sister, had no interest in the pursuit until about three years ago. “The first time she came out with me I shot a deer and she got hooked right away. Now it’s all she talks about,” Shannon laughed.

“We didn’t want to be catered to,” said Megan. “We wanted to get the full experience, because for us it was a learning experience.”

These women take their hunting seriously, but knew that their hosts at Trout Lake Outfitters (www.troutlakeoutfitters.com) might be caught off guard by them. “After I booked the trip the guide called and asked me why we wanted to go and what our experience was,” Shannon said. “They didn’t know what to expect.”

When the group arrived at camp, settled in, and started shooting their bows, it became clear to everyone that they were there to bring home bears. Before their first evening hunt, the ladies sat down with the guides to ensure everyone was on the same page.

With three of the four women having careers in the outdoors, this trip was about more than just fun for them. “We didn’t want to be catered to,” said Megan. “We wanted to get the full experience, because for us it was a learning experience.”

The guides explained what to expect in the woods, how to size a bear using the barrels, and how to tell the difference between a male and female. 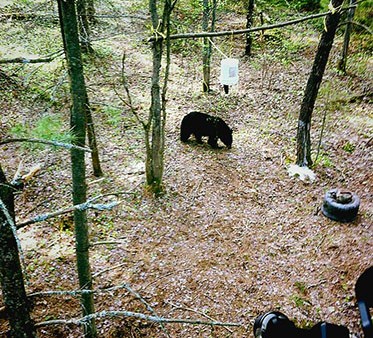 Bear down
Megan set the tone for the trip when she downed a massive boar the first night. “The scale that it broke was 360 pounds. The bear was easily between 400 and 500 pounds. We never got a weight off it, but we have pictures,” she said.

Megan shot her boar at 25 yards. When it came in, she was confident of her range, but controlling her excitement was an issue. “My bear was larger than the barrel and my heart was racing. I knew it was humungous,” she recalled. “I was so overwhelmed and excited that my adrenaline was through the roof. The most challenging part of this hunt was managing my adrenaline so I could get off a good shot.”

The guide mentioned that he had seen big tracks, but didn’t have a picture on the game camera. “So, I didn’t know at all there was a bear that large in the area. I almost didn’t expect to see anything. I was just about to head out of my stand because it was just before dark,” she added.

“It got my adrenaline going really good,” she said. “I had to draw three times before I was able to get a good shot.”

Shannon, too, filled her tag on Day One. She remembers watching a sow and two cubs for almost an hour when a boar came crashing in. “It got my adrenaline going really good,” she said. “I had to draw three times before I was able to get a good shot.” Her bear was also about 25 yards out, and it dropped about 50 yards away.

Jordan was next up on Day Two. She had never shot a large game animal before, and when her moment came, she took a video of herself and sent it to her sister and Megan – who were out fishing at the time – before she contacted the guides. “She was shaking so bad, she couldn’t really control herself. It was pretty cool knowing the feeling and then having her telling us how she felt,” said Shannon.

“All of a sudden I saw black coming through the woods and my heart just started to pound. I was so excited. It’s something I will never forget,” Amy said.

Amy, determined to not be the only one heading home with an unfilled tag, went out again on the third evening, with Jordan along for support.

“All of a sudden I saw black coming through the woods and my heart just started to pound. I was so excited. It’s something I will never forget,” Amy said. She took her shot when the bear turned broadside at about 15 yards. “My bear only went about 30 yards and by the time the guides came, Jordan and I had already dragged it back to the bait pile.”

From start to finish
Four women and four filled tags in less than four days — not bad for a first bear hunt. “[The guides] thought we were going to know absolutely nothing about hunting and weren’t expecting us to get one,“ Amy laughed.

But the action didn’t stop there. Each woman skinned her own bear, which is something the guides generally do for guests. “We wanted to learn as much as we could,” said Megan. “It has given me the confidence to go on a bear hunt on my own.”

As the spring bear hunt pilot project moves into its second year, you can bet these ladies will be back in the bush, bows in hand.

This article originally appeared in the print edition of Ontario OUT of DOORS in May, 2015.